~Easy (Stole THIS from your home page, too!)

WOW this has surveillance video from restaurant ... it adds a lot to this picture + explains much ... but leaves many more unanswered questions. There is a car behind Floyd’s car ... presumably where cellphone video came. Then that car leaves a bit later ... there’s nobody coming to the car - just someone sitting in the car making a video? Floyd is cuffed and removed from the car ... a lady (girlfriend?) and another dude get out of the car and are directed to stay against the wall. Then another car pulls up - this is the car that is angled into the spot. Except this is NOT where things happen ... this is when Floyd is taken across the street to another car whereupon he falls down on the curb side of the car (not the driver’s side as shown in the video that’s been presented). Then the other police car is moved ... also across the street ... and parks right in the line of sight from the camera so it can’t pick anything much up any further.

This raises more than it answers IMO.

The whole thing is hinky.

:49 sec video of the violence very intense, sounds like fire arms and who knows what, lots of burning:

Antifa attacks the US Embassy in Athens, Greece.

Watch as he describes 'Black Bloc' and how it is used to conceal evidence of those committing violent crimes.#EXPOSEANTIFA pic.twitter.com/SjfZsV2kmc— James O'Keefe (@JamesOKeefeIII) June 4, 2020

Andy Ngo, conservative journalist who was viciously attacked by Antifa:

I'm deeply familiar w/the extremist bookstore that was used as a clandestine training place for Portland antifa, as seen in #ExposeAntifa vid. Shockingly, the store had a financial arrangement w/@Portland_State to sell books to students! I wrote about it: https://t.co/3QaKRHCS3u— Andy Ngô (@MrAndyNgo) June 4, 2020

Another extremist unmasked as one of the trainers for new antifa members & recruits in the #ExposeAntifa video is Portland-based radical activist, Adam Rothstein. https://t.co/KvdA3M6nOv #antifa pic.twitter.com/9R4jbceY6y— Andy Ngô (@MrAndyNgo) June 4, 2020

So the she-head of Portland Antifa's dual citizen husband is Swedish:

In #ExposeAntifa, it is revealed that Caroline Victorin (née Gauld) is one of the founders of Rose City Antifa, the oldest known antifa organization in the US. With her Swedish husband, Johan Victorin,—who is also antifa—they helped import European antifa extremism model into US. pic.twitter.com/EPpMniKe23— Andy Ngô (@MrAndyNgo) June 4, 2020

‘Non-Profit’ Funded by Soros and Big Tech Files Lawsuit to Stop President Trump’s Anti-Censorship Order
The Center for Democracy and Technology is a globalist front group.

What’s happened with the lockdown and then the sudden reversal for political reasons is by far one of the worst injustices perpetrated by our government in modern times. It’s almost unfathomable. I’m seething over it. Any decent, freedom loving American should be.— Matt Walsh (@MattWalshBlog) June 4, 2020

I ran out of room. It also teaches wives to hate their husbands, mothers to hate their children, children to hate their parents. That’s all it does. Turns groups against each other and individuals against themselves. I hate everything about it. It’s poison.— Matt Walsh (@MattWalshBlog) June 4, 2020

Minneapolis will attract ALL CRIMINAL GANGS IN THE WORLD and every single person who wants to fight them.

Oh, look. A Turkish Islamist cult was paying Tony Podesta, a Washington lobbyist and the brother of John Podesta, Hillary Clinton's Chief of Staff. Whom did the FBI investigate for being a Turkish agent? Podesta? Or General Mike Flynn? https://t.co/5ggqRl9GbO— Mike (@Doranimated) June 4, 2020

👇bank statement of the nr. 1 Gulenist foundation in the US shortly after the coup attempt in Turkey. Pls note that Podesta Group which receives a sizeable sum is owned by the brother of Hillary Clinton’s Chief of Staff. And I wonder who Enef Kantar is? #EnesKanterPoliticizesNBA pic.twitter.com/gOY1XZ2Po3— Ekim Alptekin (@ekimalptekin) June 4, 2020

POTUS sure knows how to lay burn. :)

Big lightning hits the Washington monument. The storm is upon us. #GodWins

BCA wanted to search officers’ 3rd Pct lockers & Officer Thao’s work phone stored there, as is routine. Warrant was signed Thu night. Minutes later, police abandoned building and it was set ablaze. Unclear what role this played in timing; whether evidence was obtained.

Antifa was born in Germany during the 1930s.

It’s always been an international movement. it was imported to here in the US from there.

I heard O’Keefe on Hannity’s radio show today. He mentioned twice or 3 times that it was almost as if they were being trained by the FBI. Hmmm

@realDonaldTrump
·
3h
Great to be with our wonderful Men and Women of the
@SecretService
. What a job they are doing!

What did I just watch? WHOA! 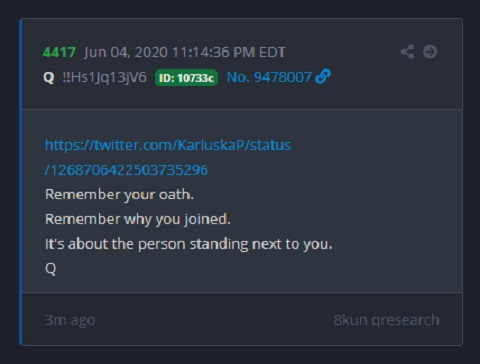 Hmm, that’s interesting. O’Keefe had a new longer video this morning but when I clicked, youtube had taken it down. I’m on his email list.

539 posted on 06/04/2020 8:26:22 PM PDT by Bigg Red (WWG1WGA)
[ Post Reply | Private Reply | To 270 | View Replies]
To: little jeremiah
Leftism is a religion of self-loathing. It teaches white people to hate their race, boys to hate their sex, women to hate their femininity, Americans to hate their country, westerners to hate their history. What a contemptible, toxic thing it is.— Matt Walsh (@MattWalshBlog) June 4, 2020

I assume we have retired psychops who might be able to help. I wouldn't trust active 'intelligence' at this time.