She was never a stereotype.

That was my thought earlier this month when I heard that “Mia,” as the Land O’Lakes Native American maiden was known, had been taken off the butter box. She was gone, vanished, missing. I knew Mia had devolved into a stereotype in many people’s minds. But it was the stereotype some saw that bothered me.

North Dakota state Rep. Ruth Buffalo (D), for instance, told the Pioneer Press in St. Paul, Minn., that the Land O’Lakes image of Mia went “hand-in-hand with human and sex trafficking of our women and girls … by depicting Native women as sex objects.” Others similarly welcomed the company’s removal of the “butter maiden” as long overdue.

How did Mia go from being a demur Native American woman on a lakeshore to a sex object tied to the trafficking of native women? […]

Mia’s vanishing has prompted a social media meme: “They Got Rid of The Indian and Kept the Land.” That isn’t too far from the truth. Mia, the stereotype that wasn’t, leaves behind a landscape voided of identity and history. For those of us who are American Indian, it’s a history that is all too familiar. …

I bought butter yesterday and made sure not to get Land o’ Lakes.

That was from a time when Indians were on coins, had teams named after them. US Army units had Indian motifs. It was a time of respect for anything Indian.

It’s childishness and revolutionary socialism behind this.

most libral are racial identitarians and there for equate the very racism they them selves have as being the motivating force in other. 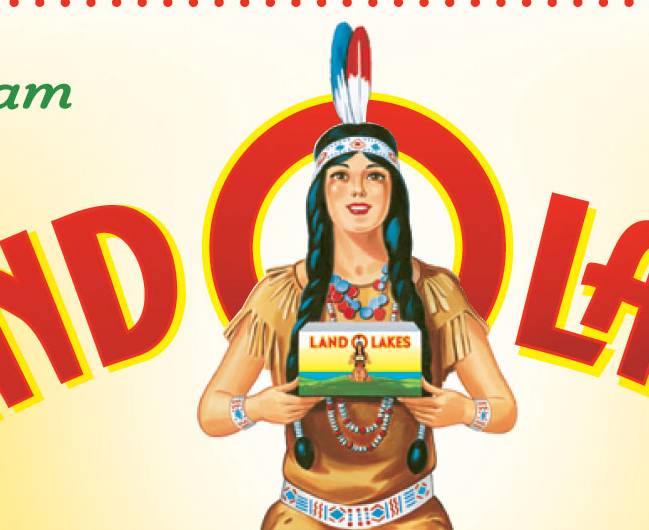 That is usually true in these cases. Of course, insults provide leftists with opportunities for virtue signaling, homages do not.

“... hand-in-hand with human and sex trafficking of our women and girls...”

Yeah, but tribes stopped doing that after the White man took things over. Cannibalism too.

As a little girl I thought the Land O’Lakes lady and the Sunmaid Raisins lady were the two most beautiful, serene women. I wondered if they were friends.

There was a time when American Indian imagery was a common and treasured part of American culture.

Cultural Marxism is slipping us down the buttery slope.

It is political correctness run amok (as other posts have said).

To me, fiction often occurs in product images. But it should never be taken seriously. Yes, native Americans did not run dairy farms and manufacture butter. So what?

But was the use of the “Indian Maiden” image an intended slight of any native Americans? No.

Land O Lakes was founded in Minnesota. Minnesota is known as the “land of 1,000 lakes”. The Ojibwe tribe is one of the major tribes of Minnesota. It was an Ojibwe artist that drew the “Indian maiden” image for the use of the Land O Lakes company.

The company should not have caved to the political correctness pressure.

Ironically, Land O’Lakes was a cooperative from its outset, originally named as the Minnesota Cooperative Creameries Association, so it was always communist-minded. Nobody “caved” here; the merely acted as if it were the right time to do such a thing.
53 posted on 04/30/2020 10:27:45 AM PDT by Olog-hai ("No Republican, no matter how liberal, is going to woo a Democratic vote." -- Ronald Reagan, 1960)
[ Post Reply | Private Reply | To 52 | View Replies]
To: Olog-hai

Minnesota has always had lots of Leftists and “progressives”.

The Minnesota party of Hubert Humphrey:

The butter cooler was pretty much empty, except that there was still be a good supply of Land O’ Lakes left there.

Someone seems to be taking this personal.

That was a big joke back then, wasn’t it? The box she held was partially cut out, to open like a door. LOL!