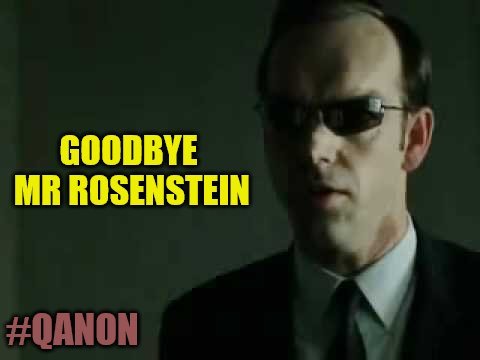 The question remains, is [1] coming? Removal from DOJ?

Did [RR] feel safe post AF1 30-min meeting w/ POTUS?
Did [RR] communicate meeting back to handlers?
When your 'enemy' feels in control….

[RR] has "handlers" who he communicated the contents of the meeting with the President (on AF-1) back to. He is described as "the enemy" by Q, here.

The [RR] meeting was meant to be communicated back to [RR]'s handlers, and to make them feel safe.

Then Sessions was let go and in walked Whitaker.

There can be no question as to the color of his hat, and he is "good-byed" from the Mueller loop at this point, but in my opinion can still do damage.

I hope he is destined for ultimate removal. He can no longer be a legitimate "red line" for the derps, as firing him can no longer be construed (wrongly) as obstruction of justice or interfering with the fake Mueller investigation.

I think his time is short.

If [RR] is dirty, Mueller is dirty.

I could never make sense of the boot business so I assume McCain had a strained tendon on one ankle and wore the boot, then strained the other one by compensating, causing the boot to be moved to the other foot.

The idea of hiding a ankle bracelet doesn’t make sense. McCain was at home and all pics were controlled by the family and handlers. If he had a bracelet, don’t photograph his ankle area, not hard. There was no need for a boot to hide the bracelet even if he was wearing one. He wasn’t anywhere to be seen.

I have noticed since we all watched our Troll College video by our friend Scott Adams we have been searing the trolls with ridicule, stooopid comebacks, and arrogant disregard for their feelings or their claims of wanting to engage. It has been rather glorious. First rule: Attack them for something other than the position they are pretending to espouse. 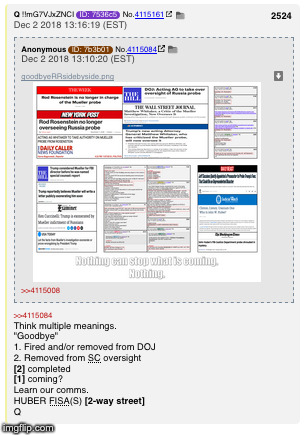 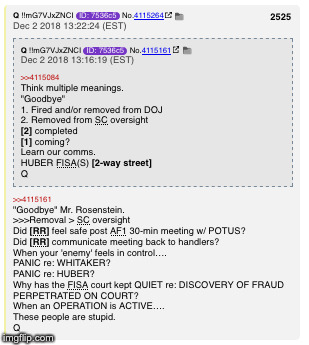 RR = Dead man walking. He must now that by now.

Thank you for posting the drops!

That was a bit mystifying given what he has to know about GHWB. Maybe it’s part of ‘lull the idiots’ a bit until the huge hammer moment now on the brink? Lull them; keep them guessing; make them scratch their heads etc?

Goes back before the Clintons in terms of how were they able to come out of Arkansas with all the baggage Bill was dragging behind him and become President. And WAS Hillary (the grand dragon lady of the illuminati) the one that was always pulling the strings, only thwarted by her ego quest to have the explicit power as well as the implicit.

JMO. I think the entire thing was fishy. I don’t claim to know, but I have suspicions. My guess at the time was that the brain cancer *might* have been a ruse and that if the DS prevailed he was going to have a “miraculous recovery” but if Trump/Q prevailed he was going to die or “die”. I thought he might fake his death and disappear. I also think the possibility of a military tribunal and death sentence is plausible. .... or maybe he really did have cancer.

But there was something seriously odd about his invisibility for 6 months or more where we kept hearing “statements” from a spokesperson, but never heard his voice or saw a picture of him.

The one thing I’m most confident of is that we haven’t yet heard the real story.

This does mean the timeline assumed about time between drops ( 5days, then 4, then 3, then, 2 etc. was totally wrong and is now out the window though, correct?

Agree that there is much more to this.

I have always thought that Spygate was small potatoes in the greater scheme of things. Criminal, yes. Destructive to the foundations of our government, yes. But I thought it would be viewed mostly as a personal issue between Trump and HRC and that the optics were such that Trump should not be involved because it would make him look vengeful, that it would look like a personal grudge instead of like protecting the integrity of our elections.

I think there is much more than that. More than U1 and CF crimes. IMO there is yet another dimension on this chess board.

And that, FRiends, says it all right there.

It’s apalling that people are again (like they did with McCain) claiming that Bush was killed or forced to commit suicide.

we haven’t yet heard the real story.

Agreed. Will we ever??

The Clintoons look like hell. Good . That’s where they’re going.

237 posted on 12/02/2018 11:45:27 AM PST by TheConservativeParty ( Trust The Trump)
[ Post Reply | Private Reply | To 102 | View Replies]
To: JockoManning
I do think that it must be a gleeful part of the Q-Team's job to be annoying to a range of constipated, prissy, narrow, rigid, OCD ridden, tunnel-visioned, limited, stereotypic, unimaginative, fossilized, hastey, unidimensional, . . . thinkers.

You know, Q ,mentioned specifically that the channers ("weaponized autists") were chosen for just that characteristic.

Note the use of the word "OPERATION" rather than "INVESTIGATION".

Something's happening, here.
What it is, ain't exactly clear.

It may be APPALLING!!!