Jed Dickerson holds world-record class bass Dottie after she was found dead on Dixon Lake Friday. Jed Dickerson had just left Dixon Lake exhausted and was about to sit down for lunch when he got the call from Jim Dayberry, one of the Ranger supervisors with the park's lake division.

"You might want to come back down here," Dayberry told Dickerson at around 11:45 a.m. PT on Friday. "We just found Dottie floating on the north side of the lake."

There was a group of Rangers, including Dayberry, waiting for Dickerson on the dock, shaking their heads. Dickerson picked up the 19-pound dead bass and looked for the spot on her gills that had famously earned her the nickname "Dottie."

What Dickerson held represented almost a decade of commitment, putting him on a journey that labeled him, in certain people's eyes, as both a record holder and a fraud. It began with old friends Mac Weakley and Mike "Buddha" Winn and ended with new friend and former Minnesota Vikings and Arizona Cardinals coach Dennis Green.

This was the third time he'd held Dottie, and for the third time, it didn't accompany the title he wanted so badly — largemouth bass world-record holder. George Washington Perry's record mark of 22 pounds, 4 ounces, set on June 2, 1932, at Montgomery Lake in Georgia, dodged the biggest bullet of its nearly 76-year-old life on Friday, and Dickerson, Dottie's most devoted hunter, will finally get some rest.

"In my opinion, this is one of the greatest days in bass fishing history," said Dickerson, who had spent the week with National Geographic, working on a documentary on bass. "It's the end of an era and Perry's record lives on. I don't think anyone is ever going to break it."

Dickerson, Weakley and Winn all grew up fishing together on Dixon Lake in Escondido, Calif., but they started their career hooking trout. Then one day they all watched as a guy stayed in one area all day, staring at one fish (sight fishing). Eventually he hooked a huge pregnant female and at the same time, hooked three kids on chasing bass.

But it wasn't until the late '90s that they realized their chase for big green bass would turn into a chase for the biggest green bass. A rumor and then a sighting of, at that point, a nameless, massive female bass, ended up defining their lives.

Jed Dickerson loads Dottie into a bag for the Game and Fish Department. Dottie was put in a freezer to be examined later.

"We just think it's really bizarre — kind of like it was meant to be," Weakley said. "The three of us grew up in that area, and that's the lake we used to fish out of every day when we were 6- and 7-years-old.

"And it turns out there was a world-class bass swimming in that lake three miles from our houses."

They devoted every minute of their free time to catching Dottie, which they believed would be large enough to score them the most coveted and historic record in bass fishing.

Dickerson was the first to realize the dream in 2003, and he thought the record was officially broken when he picked her off a spawning bed. He said the three friends immediately weighed Dottie at around 23 pounds, but it took the Game and Fish three hours to get to the lake to verify it as a record. By that time, they said, it was stressed and had lost a lot of its weight.

She officially weighed 21 pounds, 11 ounces, which still holds as the fourth largest largemouth bass ever recorded. That's when they noticed the spot on the gill and declared the race for "Dottie" and the record officially on.

They didn't pull her in again until 2006 when they again spotted her on a spawning bed and Weakley went to work. He eventually was able to set the hook, but when he got her to the boat, they noticed she had been foul hooked (not hooked in the mouth). Against his friends' wishes, Weakley decided not to try and make the record official with the Game and Fish.

Before releasing her, they weighed Dottie at 25 pounds, 1 ounce, shattering the record, took some photos. Weakley said he wasn't prepared for the scrutiny that followed.

The three were pounded by the media with requests for interviews and scolded by some conservation agencies and even other anglers about the way they handled Dottie. They were told by many that they had all but buried Dottie and some anglers even reported finding her dead.

"After all the scrutiny we've taken over the fish, people can see the truth now," Weakley said after seeing Dottie for himself on Friday. "Even though the fish was foul hooked, which sucked, I think it was good because it showed what the fish was in her prime.

"If we hadn't caught her in between Jed's catch in 2003 and her death today, people might have thought she topped out at 21 pounds."

Weakley and Winn backed off from the hunt after 2006. Winn eventually took a job that moved him away from Dixon and Weakley felt like the deed was done. But Dickerson wasn't finished. He wanted to see Dottie officially go down in the record books.

"I looked at it like the final chapter in that book had closed, but Jed didn't see it that way," Weakley said. "He wanted to keep pursuing it and get the official record. I think it became a personal thing with him, while for me, I kind of felt like I had been there, done that."

Dickerson said it went beyond just wanting to see his name in the books. Because of the time invested he felt like Dottie was his (along with Weakley's and Winn's), and he didn't want any "one-time angler" to come to Dixon, a public lake, catch Dottie and claim the record. He wanted to make sure it stayed close to home. And, according to Dickerson, they were coming from all over the U.S., and even some from Japan to try and put their name above Perry's in the book.

Dickerson didn't have any luck with Dottie in 2007, but he spotted her in Dixon three months ago, with the females in the early stages of the spawn. A few days later he met an unexpected new friend and business partner, Green.

Jed Dickerson and Mac Wheatley compare Dottie to her mounted self.

"I heard he was on the dock, but I didn't want to get into his business," Dickerson said. "But when I got back, I found out he was looking for me."

Green, who lives 45 minutes from Dixon in San Diego, said he knew Dickerson's story and thought he'd take his 9-year-old son Zach to check it out for himself. They struck up a quick friendship and Dickerson starting guiding for Green and Zach, both of whom love to fish.

"Talk about the biggest bass is always part legend and part myth," Green said. "Sometimes that giant bass doesn't really exist, but everyone talks about it."

A few days after that, Green and son Zach witnessed something he described as "unbelievably beautiful."

"When we saw her — it was just unbelievable," Green said. "She had two males swimming beside her — I called them her security guards — and she was more confident than any fish I've seen in my life.

"She was doing her thing, man. We think of a big fish as a fish that's lazy, but she was moving with a purpose."

Green was so enamored with the chase for the record and the mystique that followed it, he signed Dickerson on to be represented by his new business, Dennis Green Sports Marketing.

"Jed's a great fisherman and a great guide, and I think fishing is the future," he said.

Dickerson, balancing time with his job banking for a casino and his family, spent about eight hours a day, every day, looking for Dottie this spring, but the next time he saw her was when he held her on Friday.

He had all but given up hope of catching Dottie this spring when he got the call from Dayberry, but surprisingly, he said the first feeling he had after hearing Dottie had been found dead was relief.

"Now I won't wake up every morning, worrying that someone else was going to catch her," he said. "It's cost me an arm and a leg, and my family has been very, very understanding through this process.

Weakley had a similar reaction. Tired of the scrutiny and attention, he was glad that the hunt was over and happy how it ended.

"I think it's great that she didn't end up in an aquarium or on somebody's table or on a mount," he said. "It's good to see that she lived her life out and came back to visit us one last time so people can really see just how big this fish is. And now we get to share her and let other people see her."

Green said he couldn't think of a better ending to Dottie's story. One of the most impressive bass in recorded history spawned one last time and passed away on Mother's Day weekend.

"Dottie was spawning just like a 3-pound fish," he said. "As a big fish, she still was into spawning. When they found her today, she was totally spawned out.

"She did what she had to do, and she did it on Mother's Day weekend. And her legend as the biggest fish ever goes on."

Editor's Note: Dickerson is a guide on Dixon Lake. He can be contacted at lunkers@cox.net.

TOPICS: Outdoors; Pets/Animals; Science
KEYWORDS: bass; fish; outdoors; recordbook
I've had a big fish haunt me before, was consumed with catching it.

Years ago, on a lake in Texas, I was trolling Rapalas and RattLTraps with my (then) 12 year old nephew.

He got a hit, rod doubled over and he grabbed it and set the hook, began reeling.

A fish on the line jumped out of the water twice, shook its body in a frenzy, then the Rapala went flying through the air, and she suck underwater. My nephew's rod went straight, and his heart sunk.

That was almost 20 years ago, and we still talk about that fish. We estimated her to be about 12 pounds.

Thanks to CrappieLuck for freepmailing me this story. This fish was the Mother of Mother’s, spawned one last time before dying.

Her offspring will haunt anglers for decades. 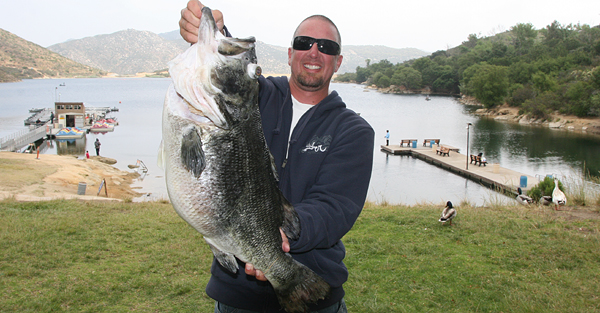 6 posted on 05/12/2008 1:05:30 PM PDT by jazusamo (DefendOurMarines.org | DefendOurTroops.org)
[ Post Reply | Private Reply | To 1 | View Replies]
To: girlangler
A fish on the line jumped out of the water twice, shook its body in a frenzy, then the Rapala went flying through the air, and she suck underwater. My nephew's rod went straight, and his heart sunk.

Made me think of this PETA comic book.

8 posted on 05/12/2008 1:12:07 PM PDT by Bon mots
[ Post Reply | Private Reply | To 1 | View Replies]
To: Iowa Granny; Ladysmith; Diana in Wisconsin; JLO; sergeantdave; damncat; phantomworker; joesnuffy; ..
If you'd like to be on or off this Upper Midwest/outdoors/rural list please FR mail me. And ping me is you see articles of interest. Dottie, the Mother of all Mothers

One question for ya:

Did they wrap her remains in ‘The New York Times’ or ‘The Washington Post?’