Democrats and their liberal media want desperately to smear and attack President Trump for his coronavirus record. The Democrats want to rewrite history over Trump’s handling of the pandemic.

As part of his unhinged press briefing at the White House Monday, President Donald Trump berated CBS correspondent Paula Reid for challenging his decision making in the early stages of the coronavirus outbreak.

Reid attacked President Trump, repeatedly interrupted him. She was a TOTAL DISGRACE!

President Trump rightfully called her out, “You know you’re a fake. Your whole network… The people are wise to you!”

Ahead of the explosive confrontation, Trump repeatedly touted that the implementation of travel restrictions from China helped slow the spread of the virus. Reid called out the president for not taking other measures in the weeks leading up to the lockdown.

Trump interrupted to snap at Reid.

The reporter and the president attempted to talk over each other. During the crosstalk, Reid issued a forceful challenge to Trump’s leadership capabilities.

“How is this rant supposed to make people feel confident [during] an unprecedented crisis?!” Reid said

Trump circled back to China’s travel restrictions. Reid tried to pin Trump down as he evaded the question.

“What did your administration do in February with the time that your travel ban bought?”

Watch the video below: https://www.youtube.com/watch?v=f61FAPSS1II&feature=emb_title

Well, it seems that Reid has a soft spot for China. It was obvious that she didn’t like President’s tantrum towards CCP.

Paula Reid’s husband Jason Reid is a lobbyist for China! Notice his Chinese education and his current ties to China.

– Worked at the American Chamber of Commerce in China

-Went to college at Peking University in Beijing China.

From We Are The News:

Please share this article wherever you can. It is the only way we can work around their censorship and ensure people receive news about issues that the mainstream media suppress.

TOPICS: Conspiracy; Government; Health/Medicine; Society
KEYWORDS: blogspam; cbs; china; chinesevirus; communism; fakenews; media; msm Navigation: use the links below to view more comments.
first 1-20, 21-40, 41-60, 61-64 next last
This woman's background is now being scrutinized. To those currently digging, it appears Ms. Reid's husband has some very strong China connections. Tell us, Paula, does your husband go by Jason Reid or Jason Kolsevich? Paula Reid's husband is bought and paid for by China. She should NEVER have been in that briefing with such obvious conflicts of interest and axes to grind. Somebody needs to check her recent bank deposits to see if there’s anything going on between HER and the CCP too!
1 posted on 04/14/2020 4:39:05 AM PDT by USA Conservative
[ Post Reply | Private Reply | View Replies]
To: USA Conservative 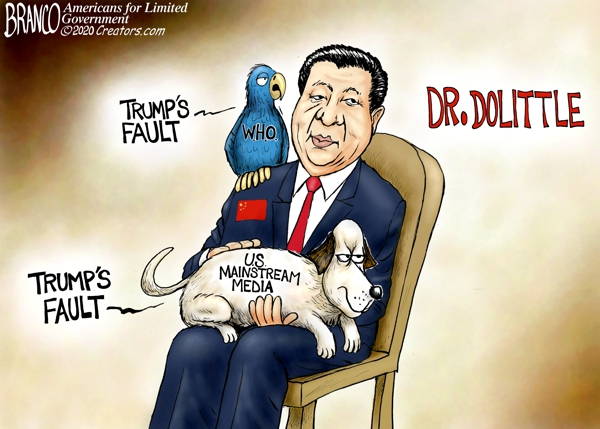 “As part of his unhinged press briefing”

“Unhinged?” What the hell?

I’d call it more like a good talking to. What kind of USA Conservative says this crap about the most conservative president we’ve had since at least Reagan?

And why would you post such crap without acknowledging it’s attack on Trump?

I thought the president kept his cool - I was yelling at the computer. I don’t know how he managed to stay under control when dealing with this obnoxious witch.

The whole thing reminds me of my grandson, pestering, bugging, being obnoxious to his sister, then when she finally yells at him, he runs off and squeals on her. That’s what the press has become.

My usual response is to follow the money, but this is DC so track the spouse or pillow-talker is a worthy addition.

Makes me think a classic exchange between Benson and Chester on an episode of “Soap”, in which Benson catches Chester ending a phone conversation with Claire, his secretary/mistress and says to Chester (after he hung up the phone) “My, my, my,”, to which Chester replies “Benson, what’s that supposed to mean?” and Benson says “Just what I said, my, my, my”.

She is a GOOD DEMOCRAT...vile, evil, rude, vicious liar!
What kind of MAN changes his last name to his wife’s??? Looking at his picture would be a HUGE CLUE!

Does he REALLY lobby for CHINA????

That pissed me off too.

Watching President Trump yesterday reminded me why I can’t wait to once again cast my vote for him next fall. Finally! Someone who fights, and wins for us!!!

She should have been removed. PT is the most transparent P ever.

Outing the enemy, great we need to do more of it

She was Contemptible. Disgraceful. I’m sure someone must be digging up everything on her ~ what a disgraceful....hmmmm...( “ woman “, doesn’t seem to describe her )...witch.

He is the best! We should all watch his moves and calculations. We would learn so much!

The journalist kids are crying out for correction. Someone should be the adult in the room. They have no manners or respect for someone with different opinions. They want liberalism, which is a mental disorder anyway.

The enemy within needs to be gone.

The Fourth estate is the FIFTH COLUMN in this country!

How many questions from the “depressed” are gotcha’ or previously answered and how many seek real information. I contend very little NEW information comes from the questions. I think the reporters should be removed from the equation during this crisis. We tune in to hear the President, not Reid, Karl and Acosta.