Nationally renowned author and conservative commentator David Horowitz may be one of the most feared -- or hated -- men on campuses nationwide, but he still knows how to attract a diverse crowd.

Horowitz, who gained fame at the University [of Oregon] in 2001 with his advertising campaign against slavery reparations, visited the campus Friday night to castigate leftists, liberal bias on college campuses, the anti-war movement and slavery reparations.

About 150 people crammed into Fenton Hall to hear the speech, and more were forced to sit outside after the room was filled. Conservative students, faculty members, community members and members of the campus anti-war movement all attended.

Horowitz seemed to have the harshest words for the University faculty, criticizing what he saw as their effort to indoctrinate students into a "leftist ideology." He also accused faculty of employing a "ruthless blacklist" that stifles conservative faculty and viewpoints.

Horowitz also slammed the current resolution that would align the University against a war in Iraq. He said if the University Assembly succeeds in passing the resolution, it would be an abuse to all students on the campus who support the war.

"A genuine peace movement would, of course, be demonstrating at Iraqi embassies" and demanding that Saddam Hussein disarm, he said. "This is not a peace movement; it is a movement to divide this country, to sabotage its defense efforts and to help our enemies to win."

The first tense moment of the evening erupted when Horowitz's critical remarks about the anti-war movement provoked an outburst from the back of the room. Horowitz responded with annoyance to the interruption.

Horowitz's scathing response to the outburst seemed to cool the atmosphere, and he started telling the crowd why he believes leftists are responsible for society's ills, especially in the public school system. He said America's poorest and most oppressed minorities are in America's inner cities, and the city councils and school boards of the inner cities -- who he said are all controlled by leftists -- keep minorities illiterate with their policies.

Leftists "have their boot heels on the necks of poor black and Hispanic kids all across this country ... because they are running the public school systems as a jobs program for adults, and they could care less about what happens to those kids," he said.

Horowitz, a leader in the anti-slavery reparations movement, also talked about racism. He accused leftists of conjuring up a movement that pits blacks against others in America.

"There is a little problem with reparations," he said. "I am for reparations for former slaves. The problem, of course, is that they're all dead -- it's 130 years too late."

A question-and-answer period followed the speech, and tensions were high as many audience members argued with Horowitz, throwing the session into a debate and putting him on the defensive. At one point, Horowitz called for security after a man in the back of the room continually interrupted Horowitz.

But others chose to be more civil in their questions. Mike Linman, a student senator and co-chairman of the College Democrats, asked Horowitz whether he would support a University stance supporting a war in Iraq.

Horowitz said he wouldn't, adding he believed the University should take no political position -- whether he supports the position or not.

In an interview prior to the speech, Horowitz explained what he hopes to accomplish on the college speech circuit.

"I actually think that if I agitate -- if I can get conservative students roused up enough in this generation -- by the next generation when they're running institutions, in particular the Republican Party, they can affect this horrible situation on college campuses," he said. "The University, in the liberal arts field, has been destroyed by the left."

The preceding article appeared in the February 24, 2003, edition of the University of Oregon's official paper, The Oregon Daily Emerald. 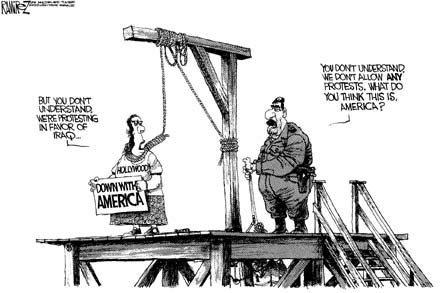 Anyone from the Right who doesn't support this man and his unlimited courage is no friend to America or our cause.

I'd love to see him hit every campus in America... several times each ;-)

The truth is whatever you want it to be.

But it's an irrational statement.

Can you explain why it's irrational?

If you can, you are prepared to fight liberalism.

If you can't, you now -- at least -- know the area you need to study: philosophy.

There are very few rational philosophers that were able to survive in their irrational surroundings. Such philosophers were usually suppressed by things like the Inquisition; and if suppression didn't work, they were usually killed

Aristotle was a rational philosopher that survived because his primary patron was his pupil: Alexander the Great.

Ayn Rand's freedom as an immigrant to America guaranteed her survival; but liberals are still working hard to destroy her success and damn her philosophy into oblivion.

Ayn Rand presented her philosophy in many formats, but the best way to present any philosophy is in the context of a novel -- a dramatic story about people. And so it is that Ayn Rand's philosophical novel, Atlas Shrugged, is the number two best seller on earth, and it will probably -- someday -- outsell the Bible.

9 posted on 02/27/2003 12:45:30 PM PST by thinktwice
[ Post Reply | Private Reply | To 1 | View Replies]
To: Indy Pendance
Where can one find speaking schedules for conservative speakers like Horowitz and others?

10 posted on 02/27/2003 12:46:39 PM PST by 69ConvertibleFirebird (Never argue with an idiot. They drag you down to their level, then beat you with experience.)
[ Post Reply | Private Reply | To 1 | View Replies]
To: Indy Pendance
Although I've only attended 1 class at the U of O, I will offer a bit in their defense. They are over run by lefties, but no more so than any other public university. It is a beautiful campus and a much cleaner atmosphere than you will get at University of Washington, USC, FSU ect. At least they don't have a statue of Lenin in Eugene. In short, it's an institution worth saving

Although the UofO was used in the filming of Faber College in Animal House, it is also the home of Bill Bowerman, Steve Prefontaine, Len Casanova and Mike Belloti. Men who well represent conservative values and work ethic if not politics.

It's true. I have a BA in history (most of which I had to teach myself, since the University was too focused on indoctrination to actual teach me anything). If my children want to go to college, I'll pay -- unless they choose a major in Liberal Arts. If they do that, they won't get dime one from me.

The trite ploy to try to paint his opponent as a hypocrite, lame even for a college student.