If Impeachment Articles Are Not Delivered to Senate, Did Impeachment Happen?
National Review ^ | 12/20/2019 | Andrew McCarthy

It’s hard to believe the Speaker’s latest stunt will go on for very long. I’ll confess: Last night, when I was first told that Speaker Nancy Pelosi was toying with the idea of not delivering the two articles of impeachment voted by the House against President Trump, I assumed it was a joke.

For these last weeks, the Democrat-dominated chamber has been in a mad rush to impeach the president. Democrats even tacked on article two — “obstruction of Congress” — because, they told us, time could not be wasted engaging in the usual negotiation and litigation over legislative demands for executive branch information. Trump is a clear and present threat to “continue” undermining our elections, we were admonished. That’s why he needs to be impeached right now. That’s why the political class cannot responsibly leave his fate up to the sovereign, the People, who will vote in November.

Pelosi and Democratic leadership have convinced themselves there may be advantage in delaying the formal, ministerial delivery of the impeachment articles — as if Mitch McConnell were in as much a hurry to receive them as Democrats were to conjure them up. The thought is that this latest strategic petulance might pressure Senator McConnell into promising a full-blown trial, including summoning as witnesses top aides of the president whom the House didn’t bother to summon because tangling over privilege issues would have slowed up the works.

So it’s not a joke, but I still have to laugh. When I was a prosecutor negotiating plea deals, I always found the most pathetic defense lawyers were the ones who acted like they were playing with the House money when, in stark reality, it was they who needed something from me. Now here’s Pelosi trying to play hard to get with McConnell who, I imagine, couldn’t care less how long Democrats want to dither.

What we’ve just seen is the most partisan impeachment in American history, every step of it politically calculated. Obviously, if Democrats perceived advantage in stretching the process out, it would still be going on. There would be more witnesses; more 300- or 600-page committee reports to try to add heft and gravity to vague allegations of inchoate misconduct; more speeches about Trump as a threat to democracy and life as we know it; etc., etc.

To the contrary, Pelosi & Co. want this train wreck in the rearview mirror ASAP. The public is indifferent and polls are edging in Trump’s favor. On our local news this morning, the third impeachment of a president of the United States in American history couldn’t crack the top stories — it came in behind cold weather (in December) and the rescue of an elderly man in a gym by a couple of off-duty cops.

No one, of course, has to explain this to McConnell. In public, at least, he’s not a laughing-his-head-off kinda guy, but if he were, he would be.

It’s hard to believe the Speaker’s latest stunt will go on for very long. In the Senate this morning, the Democrats’ minority leader, Senator Chuck Schumer, renewed his demands about trial procedures, discovery, and witness testimony. There was no discernible hint of doubt that the House would soon deliver its impeachment articles, such as they are.

But since we’ll be playing trivial pursuit for a more few hours (days?), we might as well ask: As long as the House withholds the impeachment articles from the Senate, has Trump been impeached?

In the law, there are many situations in which an outcome is known, but it is not a formal outcome until some ministerial act is taken. A grand jury can vote an indictment, for example, but the defendant is not considered indicted until the charges are filed with the clerk of the court. A defendant can be found guilty by a jury, but there is technically no conviction until the judgment is “entered” by the trial court, usually months later when sentence is imposed. An appellate court can issue a ruling that orders a lower court to take some action, but the lower court has no jurisdiction to act in the case until issuance of the appellate court’s “mandate” — the document that formally transfers jurisdiction.

Plainly, Congress has similar ministerial acts of transference that must occur in order for legislation to pass. Were that not the case, Speaker Pelosi would not be talking about delaying the transfer of impeachment articles.

So it’s all well and good for the Speaker to hold up the works that Democrats, five minutes ago, were breathlessly telling us had to be carried out with all due haste. But many scholars take the position that the Constitution requires a trial if there has been an impeachment. If such a trial cannot properly occur unless and until articles of impeachment have been transferred from the House to the Senate, and Speaker Pelosi won’t transfer them, has President Trump actually been impeached?

Sure, it’s a stupid question . . . but we’re living in stupid times.

So Kim Climent’s Prophecy is still valid then... Interesting.

um even bloomberg news is admitting that Trump is NOT impeached yet:

[[Trump Isn’t Impeached Until the House Tells the Senate

According to the Constitution, impeachment is a process, not a vote.]]

“If the articles are not transmitted, Trump could legitimately say that he wasn’t truly impeached at all,“ @NoahRFeldman writes. https://t.co/urzhneXlo8

Excellent article from Mr. McCarthy. He is clear about the law. Just one problem. The “polls are edging in Trump’s favor.” Rather, the polls are avalanching in Trump’s favor. Pelosi is a joke. The Democrats are dead. And the Americans are enjoying the land of plenty from the Creator.

For all those, including Democrat members of Congress that do not know the United States Constitution:
Article 1. Section 2:

The House of Representatives shall choose their Speaker and other Officers; and shall have the sole Power of Impeachment.

(this dose not describe what elected officials by title)

The Senate shall have the sole Power to try all Impeachments. When sitting for that Purpose, they shall be on Oath or Affirmation. When the President of the United States is tried, the Chief Justice shall preside: And no Person shall be convicted without the Concurrence of two thirds of the Members present.

There is no discussion or allowance for members of congress to be present or have managers present to present the case. It is not spelled out. That is just how the first impeachments were conducted by the rules of the bodies of the Congress and Senate. Each body sets up their own rules, but those rules are subservient to the rule of law in the constitution. Thus the Senate can conduct the trial when ever they want and without members of congress even present. The vote by congress to impeach has been completed and must now be acted on.

A case of Schrodinger’s Impeachment?

Senate of the United States... the ball is in your court. Please proceed.

the lesson leaves out both chambers ability to enact regulations

11 posted on 12/19/2019 9:45:52 PM PST by olesigh
[ Post Reply | Private Reply | To 7 | View Replies]
To: SeekAndFind
But many scholars take the position that the Constitution requires a trial if there has been an impeachment. If such a trial cannot properly occur unless and until articles of impeachment have been transferred from the House to the Senate, and Speaker Pelosi won’t transfer them, has President Trump actually been impeached?

No. Until Articles of Impeachment are officially transferred (delivered and accepted) by the House to the Senate, impeachment has not occurred...only posturing!

This is supremely important. It is either done properly & officially, or it never happened.

Well lookee here. Even Andy McCarthy agrees that under the current situation, Trump has NOT been impeached.

Impeachment requires more than just a vote. It has to be presented to the Senate. As long as Nazi Pelosi holds up the delivery, no one can claim that Trump is the third president to be impeached.

This libtard will be disappointed: 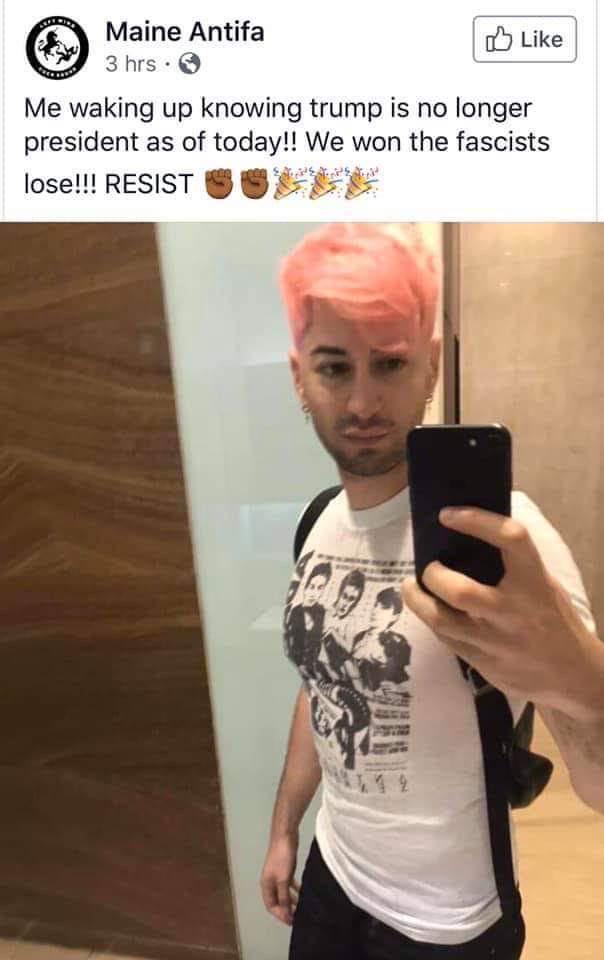 yes voted and recorded, even televised. Trump and his advisors say he is impeached. hundreds of sources reported today he is the third impeached president, including Breitbart, Washington Times, OAN and other conservative sites. Limbaugh, hannity, Elder, prager. look it up and get thousands of sources all saying impeached. One guy from Harvard comes out of the woodwork and those here who should know better after the 3 expert professors nadler had on the witness list. But heyl, whatever Harvard says. Enjoy your delusion.

This makes at least three threads on this issue that I am aware of. McCarthy lays it out well. If they cannot present their case, there cannot be a trial—simple logic. We shall see who has the upper hand. As for now, this retromingent, demented, and senile evil bitch is playing games with the constitution and America. She needs a punch to that stretched face and her head. She is one pure worthless human who only cares about power, nothing else.

thanx just back Started as biggish 8-8-98

PRICELESS! I’ve forwarded this on to all my family!

Present
The States of

Resolved, That the proceeding Constitution be laid before the United States in Congress assembled, and that it is the Opinion of this Convention, that it should afterwards be submitted to a Convention of Delegates, chosen in each State by the People thereof, under the Recommendation of its Legislature, for their Assent and Ratification; and that each Convention assenting to, and ratifying the Same, should give Notice thereof to the United States in Congress assembled.

Resolved, That it is the Opinion of this Convention, that as soon as the Conventions of nine States shall have ratified this Constitution, the United States in Congress assembled should fix a Day on which Electors should be appointed by the States which shall have ratified the same, and a Day on which the Electors should assemble to vote for the President, and the Time and Place for commencing Proceedings under this Constitution. That after such Publication the Electors should be appointed, and the Senators and Representatives elected: That the Electors should meet on the Day fixed for the Election of the President, and should transmit their Votes certified, signed, sealed and directed, as the Constitution requires, to the Secretary of the United States in Congress assembled, that the Senators and Representatives should convene at the Time and Place assigned; that the Senators should appoint a President of the Senate, for the sole Purpose of receiving, opening and counting the Votes for President; and, that after he shall be chosen, the Congress, together with the President, should, without Delay, proceed to execute this Constitution.