It's a sin to fly, says church

THE Bishop of London has declared it sinful for people to contribute to climate change by flying on holiday, driving a “gas-guzzling” car or failing to use energy-saving measures in the home, writes Jonathan Leake.

Richard Chartres will encourage vicars to preach more green sermons and warn congregations that it is now a moral obligation for Christians to lead eco-friendly lifestyles.

Chartres, who chairs the bishops’ panel on the environment, said: “There is now an overriding imperative to walk more lightly upon the earth and we need to make our lifestyle decisions in that light.

“Making selfish choices such as flying on holiday or buying a large car are a symptom of sin. Sin is not just a restricted list of moral mistakes. It is living a life turned in on itself where people ignore the consequences of their actions.”

Chartres, the third most senior bishop in the Church of England, has declared his views as it prepares to publish Treasures on Earth, a booklet on environmental matters to be sent to every diocese for distribution.

Rowan Williams, the Archbishop of Canterbury, said: “We stand before God’s judgment on these matters. In life we have to make moral choices over our sex life and over our domestic and financial affairs. We make choices of moral significance and our relation to the environment is no exception.”

The booklet will say that scientific research supporting predictions that the earth faces serious climate change is “overwhelming”. It will also detail practical ways for Christians to cut their carbon emissions, at church and at home, including trying to walk or cycle to communion.

The church’s advisers on the environment say that offsetting your carbon dioxide emissions against “green” actions such as planting trees is a first step towards becoming sustainable but is not a long-term answer.

Under Chartres, the church has commissioned briefings on climate change, plus examples of green sermons, available on the internet, to help vicars master the facts when writing their homilies.

As dean of the chapels royal, Chartres also oversees churches used by the royal family and so is in regular contact with the Queen, the head of the church, and the Prince of Wales. A church spokesman confirmed both had supported Chartres’ initiative.

The church is taking steps to improve its own environmental record and has asked vicars to carry out an energy audit so they can reduce their “carbon footprint”. It owns some of the largest and draughtiest buildings in Britain, including medieval cathedrals, gothic churches and ageing parsonages.

“We have no right to appeal to our contemporaries on this issue if we have failed to put our own house in order,” said Chartres.

Lambeth Palace, Williams’ residence, has been audited — and was criticised for using inefficient light bulbs rather than the low-energy alternatives.

Claire Foster, the church’s environment policy director, said: “Indiscriminate use of the earth’s resources must be seen as profoundly wrong, just as we now see slavery as wrong.”

Doesn't the good Archbisop have more pressing matters to attend too? LOL!

The Church of England is not serious about sin. This is ridiculous.

As if the church of England didn't have enough thorny issues to deal with.

Too bad Bennie Hill is gone now, he would have had so much fun with this.

Then again, there's always Carlos Mencia and the Mind of Mencia show.

No prob, honey. Of course, that means your tourist trade will go down the toilet.

7 posted on 07/23/2006 4:07:00 PM PDT by BlessedBeGod (Benedict XVI = Terminator IV)
[ Post Reply | Private Reply | To 1 | View Replies]
To: 1066AD
Another liberal whackjob nuttering on about global warming. I thought it was Fred Phelps until I saw the sin this bishop decried and I stopped reading right there.

You just don't get it! It's wrong to drive a gas guzzling caddy, but righteous to have homo sex as long as you do it in an eco friendly way.

This is ridiculous. The absolute arrogance and hubris of those who believe we little ant-like creatures have the power and ability to change the climate of an entire PLANET is beyond me. Better that these "manmade climate change" fools look both to the sun and to the Son to determine the cause of climate change and the meaning of sin, respectively.

I was reading about the introduction of the first 707's on transatlantic service. Even the original 707-300's were more efficient than tha ocean liners they replaced. One 707 could carry more passengers than an ocean liner, used less fuel per passenger, and a cost tenth of the capital cost of a ship. While the 707 had fewer seats, it could make a round trip once a day while the ocean liner would take 4-5 days one way. 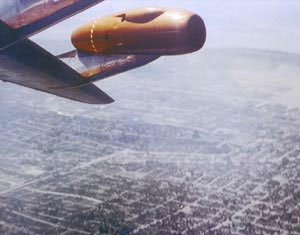 The good bishop proves that even incompetents can have a calling within the clergy...

I guess half a preacher is better than none(?)

To: 1066AD
Another religious figure inventing yet another sin to control the behavior of his flock.

The good Bishop spent Easter on a cruise ship, no less...

And a hypocrite too. He's in the same league as Dianne Feinstein as to pushes for gun control and carries one daily.

This has got to be one of the stupidest things I've heard in ages. It makes me want to go fly just to spite this idiot.

17 posted on 07/23/2006 4:15:38 PM PDT by COEXERJ145 (Free Republic is Currently Suffering a Pandemic of “Bush Derangement Syndrome.”)
[ Post Reply | Private Reply | To 12 | View Replies]
To: Paleo Conservative
Exactly. And its made travel more convenient and affordable for ordinary people. Civil aviation revolutionized the world of travel. Before the airplane, only the very wealthy could see famous views close up - and they traveled to Europe on cruise ocean liners. Now every one can. No wonder the Bishop Of London is saddened. Its all those blue collar riffraff intruding into the rich's playground. How dare they!

18 posted on 07/23/2006 4:18:07 PM PDT by goldstategop (In Memory Of A Dearly Beloved Friend Who Lives On In My Heart Forever)
[ Post Reply | Private Reply | To 12 | View Replies]
To: Scotsman will be Free; ClaireSolt
You just don't get it! It's wrong to drive a gas guzzling caddy, but righteous to have homo sex as long as you do it in an eco friendly way.

Does that mean recycling used condoms?