The Best Rebuttal And Rebuke I Have Seen Of Jorge Bergoglio's Throttling Of The Latin Mass <Vanity>
7/18/2021 | Its All Over Except...

Person 1: "PRAISE BE JESUS THARE ARE 5 000 Members in our Parish There is no Latin Rite and no interest Our Parish is multi National origins Everyone Speaks and understands MASS With Latin Prayers in Liturgy On Sunday and Holy Days. Pope Francis has the keys to loose and bind. Pope Francis did not rush this decision He had 11 days in Hospital to pray and reflect. This is a challenge of Obedience sign of HOLY SPIRIT PRESENCE. Pray the MISSA with REVERENCE. PRAY FOR CHURCH."

Person 2 replied: "You made an interesting point. Pope St. Pius V said this his Latin missal was to be used forever, and if anybody contradicted him or tried to change it they would suffer the curse of the Apostles Peter and Paul. To which Pope should we be obedient when one Pope contradicts the other? This sort of sounds like Islam to me where Allah is always changing his mind."

Person 1 replied back to person 2: "We are living in 21st Century Vatican Council II established our Time we can’t go back in time the HOLY SPIRT is LEADING THE CHURCH . Confusion deception abounds stay true to the Catholic Catechism Catholic Church for our time. TLM was abused to excess as alternative. SHEPHERDS are responsible for their flock many have lorded their positions into high places. Page 889 Glossary Obedience pg 890 3) Obedience of Christ and 4) vow of Obedience. AMEN."

Person 2 replied back to person 1: "Thank you for explaining it to me that way. I am clear now that in your religion truth changes each century. And that when the Pope says "this is forever and cannot be changed" it is not actually forever, because a Pope could come along later and change it. This means that some Popes are actually liars and deceivers. But we should obey them anyway because of obedience. So liars and deceivers are the guys we should be obedient to. But the Holy Spirit is guiding all the lying and deception, so it's all ok? This sounds blasphemous to me. This doesn't sound like it comes from the true God. Sounds like a false cult of personality."

Heterosexual marriage only being supported by Sacred Scripture will be "rigid" one day to V2 modernists?

The V2 modernists have already challenged Pope St. Peter declaring there is no other name under heaven given among men whereby we might be saved in Acts 4 with their push towards universalism along with challenging other Sacred Scripture combined with their unending attacks on Sacred Tradition.

A.) Jorge Bergoglio and numerous bishops have shown they are not the kind, caring Vatican 2 they made themselves out to be.

C.) All the while everyone else gets the Syndol Way while Bergoglio is hypocritically dictatorial with Traditionalists in that he said the bishops are to ensure that groups already celebrating the TLM “do not deny the validity and the legitimacy of the liturgical reform dictated by Vatican Council II and the Magisterium of the supreme pontiffs” while every conceivable Novus Ordo mass under the sun is allowed, crazy antics, such as hip hop music and worse during masses taking place.

D.) The signatories to Vatican II refused to take an oath against modernism, but now demand allegiance to modernism (we can see its fruit above) - or else! Renewal allegiances at each mass? This isn’t conversion through free will but through coercion. And he does the finger wag now after being party to schism himself by blessing the Pachamama representatives and naked Pachamama idol from the Amazon synod while bowing before it, as seen on video.

I provided exact quotes and any spelling errors from them aren’t my doing.

I’m not Catholic and even I find this news repulsive and offensive.

Vatican II is the result of the progressives in the NWO. It is/was the progressives participation of bringing the Catholic Church in line with the One World Religion and needed the Church to become a part of the movement of New World Order for it to succeed. But the progressives are forgetting one thing, the TLM has been around for more than 1600 years and is the highest form of adoration of The Christ, but the Progressives refuse to understand that. The Christ won’t let the progressives destroy his Traditional Latin Mass which was ordained and originated at the Last Supper by The Christ himself.

“Vatican II is the result of the progressives in the NWO. It is/was the progressives participation of bringing the Catholic Church in line with the One World Religion and needed the Church to become a part of the movement of New Word Order for it to succeed. But the progressives are forgetting one thing, the TLM has been around for more than 1600 years and is the highest form of adoration of The Christ, but the Progressives refuse to understand that. The Christ won’t let the progressives destroy his Traditional Latin Mass which was ordained and originated at the Last Supper by The Christ himself.”

Strong start, but the ending? Could use some work.

The Christ of God is justifiably believed to have passed on, more or less intact, the Holy Sacrifice of the Mass to the Apostles, his bishops, on Holy Thursday. The Usus Antiquior or TLM is believed to be faithful to what transpired that day, and certainly must be considered so when compared to the “banal, on the spot product” that is the post VII quote-unquote “Ordinary Form” of the Mass (presumably Bergoglio is banishing that term from the Church’s lexicon). But, and this is certainly the case: No Latin, or at least next-to-no Latin, was spoken in the Upper Room on Holy Thursday.

I’m with you...not Catholic and this pope offends me. I loved John Paul II and even had a picture of him on my wall (I tore it out of a magazine), but I digress. Frances makes me think upon the 1st Commandment and I wonder how his worshippers can reconcile the idolatry of the pope and the most important command given by God?

1.) Then people say let’s receive in the hand. Pope St. Eutychian (275-283) forbade the faithful from taking the Sacred Host in their hand.

St. Basil the Great, Doctor of the Church (330-379): “The right to receive Holy Communion in the hand is permitted only in times of persecution.

The Synod of Rouen (650)
Condemned Communion in the hand to halt widespread abuses that occurred from this practice, and as a safeguard against sacrilege.

The Council of Rouen (650): “Do not put the Eucharist in the hands of any layman or laywoman but *only in their mouths.”

The Sixth Ecumenical Council, at Constantinople (680-681)
Forbade the faithful to take the Sacred Host in their hand, threatening transgressors with excommunication.

2.) Then it’s let’s not have veils. (St. Paul spoke about wonen wearing veils).

3.) Then it’s let’s let unconsecrated hands touch the sacred vessels even though St. Sixtus 1 (c. 115) said: “The Sacred Vessels are not to be handled by others than those consecrated to the Lord.”

Sacred Tradition can be dismantled as #5 shows and then we see Sacred Scripture also being challenged with Jorge Bergoglio saying women can do readings in church when we can see what St. Paul said in #4.

See why we need to do what the popes of The Council of Trent said and the popes from then all the way up to V2?

Now we have Bergoglio saying the church agrees with Luther on justification when this is false.

October 15, 2012
How Vatican II Helped the Jesuits Do Their Job
By Tyler Flynn

Vatican II marked a significant change which, unlike many previous ecumenical councils, did not occur on any dogmatic or doctrinal level. Rather, it created a new sense of Catholic culture, in dialogue with the modern world, which now integrates itself into every aspect of Christian life. This changing culture is marked by laity involvement in the church, a blending with modern culture, a focus on the individual, and a greater emphasis on the importance of service to others, all of which are promoted in Jesuit Catholic universities.
The Jesuit University is a unique lens through which the changes made within the church can be seen and evaluated. The focus of these institutions may not be on the rigorous study of theology and the application of Catholic doctrines and dogmas; nevertheless, they create a sense of Christian identity and culture through their students’ commitment to service and to the good of the surrounding community. ...
The focus of these universities is not to convert their students to Catholicism. While early Jesuits may have focused their ministries on saving souls, Vatican II, with its publication of Dignitatis Humanae, teaches salvation is not limited to those within the church. Thus, Jesuit institutions, through their dedication to service, can create “anonymous Christians” in the vision of Karl Rahner, a Jesuit whose ideas had a significant influence on the Second Vatican Council. In a sense, these schools graduate students who may not follow Christ, but still live their lives within His image. ...

Vatican II: this overrides everyone!

Foreswore receiving the Most Holy Sacrament in the hand years ago (as well as receiving from unconsecrated hands). Determined that receiving in that way was horrific and sacrilegious. Have never reconsidered that conclusion. Priests in the local parish do not appreciate a member of the faithful who drops both knees to the floor to receive the Body, Blood, Soul and Divinity on his tongue.
This has been particularly true during the current “pandemic” during which receipt on the tongue was supposedly banned by the local Ordinary (the ban was just lifted this month). Not particularly concerned about their discomfort.

Perhaps the practice of receiving the Holy Sacrament of the Altar on the tongue will be banned again, once and for all, and for good, on the strength of Bergoglio’s recent utterance deemed a Motu Proprio. Will cross that bridge if and when it appears.

Modernism is founded on the historic discovery that “God is dead.” So what good can come from it?

“ The Christ won’t let the progressives destroy his Traditional Latin Mass which was ordained and originated at the Last Supper by The Christ himself.”

At the same time, I am saddened by abuses in the celebration of the liturgy on all sides. In common with Benedict XVI, I deplore the fact that "in many places the prescriptions of the new missal are not observed in celebration, but indeed come to be interpreted as an authorization for or even a requirement of creativity, which leads to almost unbearable distortions."

I honestly find it hard to believe that the guy in the white cassock in the photo below wrote that with a straight face. 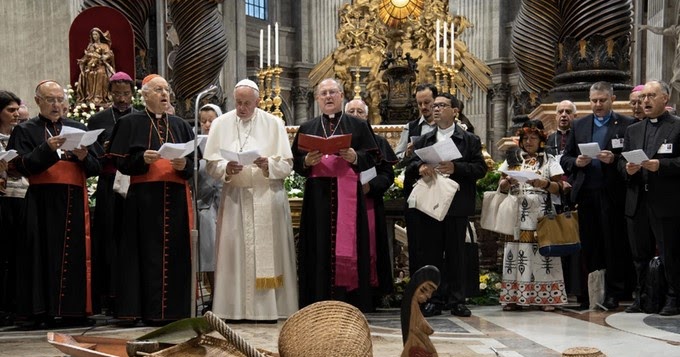 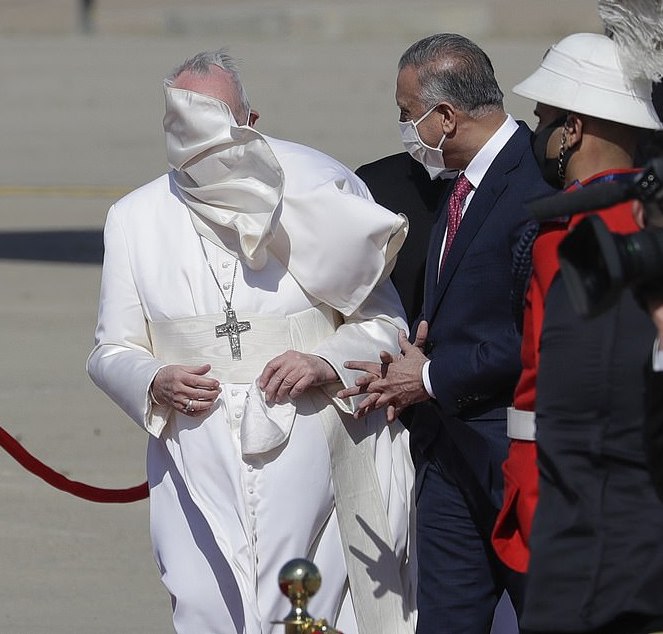 Why is anyone surprised?

Bergoglio smiles while bishops ignore teachings on homosexuality, abortion, adultery, etc, and while Bergoglio divides the church with his schismatic Pachamama idol blessings.

He has said that God willed false religions to bring us to Him, has endorsed inter-religious ecumenism, approved communion for public sinners, and he has been complicit with schism himself by bowing before and blessing the naked Pachamama idol when it was brought onto Sacred ground with schismatic idol worshippers.