The same folks to bring you “Abrahamism”—the idea that Judaism, Christianity, and Islam are intricately connected—have narrowed their sights on promoting Mary, the mother of Christ, as “a Jewish, Christian and Muslim woman,” in the words of Catholic priest Fr. Gian Matteo of the Pontifical International Marian Academy. In a ten-week webinar series titled “Mary, a model for faith and life for Christianity and Islam,” the academy will seek to present Mary as a bridge between the two religions.

This may be easier said than done — at least for those still interested in facts. For starters, the claim that Mary was a “Jewish, Christian and Muslim woman” is only two-thirds true: yes, she was a Jew by race and background; and yes, she was a Christian in that she literally birthed Christ(ianity); but she was most certainly not a Muslim — a term and religion that came into being 600 years after Mary died.

Worse, far from being the Eternal Virgin, as she is for 1.5 billion Christians of the Catholic and Orthodox variety, Islam presents Mary, the Mother of Christ, as “married” to and “copulating” with Muhammad in paradise — a depiction that would seem to sever rather than build “bridges.”

In a hadith that was deemed reliable enough to be included in the renowned Ibn Kathir’s corpus, Muhammad declared that “Allah will wed me in paradise to Mary, Daughter of Imran,” whom Muslims identify with Jesus’s mother. (Note: The Arabic word for “marriage” (نكاح, or nikah, denotes “legal sexual relations,” connotes the “F” word, and is wholly devoid of Western, “romantic,” or Platonic connotations.)

TOPICS: Catholic; Ecumenism; Islam; Religion & Culture
KEYWORDS: apostasy; copulating; friancischurch; islam; muhammad; pachamama; pagan; rop; searchandfind; vatican; virginmary Navigation: use the links below to view more comments.
first 1-20, 21-22 next last
Nor is this just some random, obscure hadith. None other than Dr. Salem Abdul Galil — previously deputy minister of Egypt’s religious endowments for preaching — affirmed its canonicity in 2017 during a live televised Arabic-language program. Among other biblical women (Moses’s sister and Pharaoh’s wife), “our prophet Muhammad — prayers and be upon him — will be married to Mary in paradise,” Galil said.
1 posted on 02/26/2021 9:14:16 PM PST by SeekAndFind
[ Post Reply | Private Reply | View Replies]
To: SeekAndFind
Mary, the mother of Christ, as “a Jewish, Christian and Muslim woman"

“ our prophet Muhammad — prayers and be upon him — will be married to Mary in paradise,”
Complete and utter blasphemy.
The Vatican has gone mad with the spirit of the antichrist enveloping them.

May mad Mo crap on a land mine!

Facts are mere speed bumps for the Communist that lead the Catholic Faith theses days.

Lies and half-truths are the tools of convenience for these men.

5 posted on 02/26/2021 10:18:55 PM PST by Pontiac (The welfare state must fail because it is contrary to human nature and diminishes the human spirit)
[ Post Reply | Private Reply | To 2 | View Replies]
To: Pontiac; monkeyshine; SeekAndFind
Facts are mere speed bumps for the Communist that lead the Catholic Faith theses days.

As Biden said, we mustn't allow facts to get in the way of the truth.

The Vatican under the command of Pope Francis is busy rebuking and supressing followers of the pre Vatican 2 liturgy form including the latin mass But when it comes to other forms of mono theistic beliefs such as the One World Abu Dhabi Movement. Francis refuses to say one word disclaiming and decrying what practice adherents of the Islam code Sharia not only claim, but truly believe that God has authorized them to do kill those who refuse to submit to their version of Gods will . 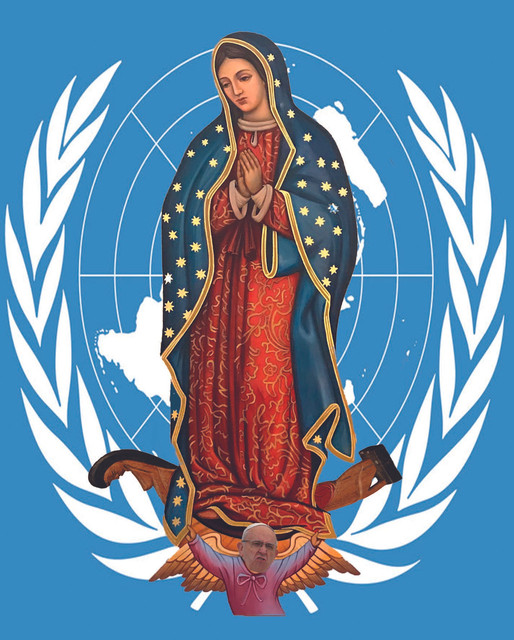 ore of the Vatican push to turn Christians into muslims

The Blessed Virgin Mary defeats no one. She has no power. The Father made the Son central and supreme in all He is doing. The government is upon Jesus’ shoulders. He is absolutely more than capable to see God’s purpose done on earth as in Heaven.

12 posted on 02/27/2021 4:58:47 AM PST by carton253 (Jesus is everything.)
[ Post Reply | Private Reply | To 10 | View Replies]
To: SeekAndFind; ConservativeMind; ealgeone; Mark17; fishtank; boatbums; Luircin; mitch5501; MamaB; ...
Well considering the hundreds of titles, plus Divine attributes and glory already ascribed to the Mary of Catholicism by Catholics, modern leadership is just adding some more, adding to those such as,

• an almost almighty demigoddess to whom "Jesus owes His Precious Blood" to,

• whose [Mary] merits we are saved by,

• who "had to suffer, as He did, all the consequences of sin,"

• and was bodily assumed into Heaven, which is a fact (unsubstantiated in Scripture or even early Tradition) because the Roman church says it is, and "was elevated to a certain affinity with the Heavenly Father,"

• and whose power now "is all but unlimited,"

• for indeed she "seems to have the same power as God,"

• "surpassing in power all the angels and saints in Heaven,"

• so that "the Holy Spirit acts only by the Most Blessed Virgin, his Spouse."

• and that “sometimes salvation is quicker if we remember Mary's name then if we invoked the name of the Lord Jesus,"

• for indeed saints have "but one advocate," and that is Mary, who "alone art truly loving and solicitous for our salvation,"

• Moreover, "there is no grace which Mary cannot dispose of as her own, which is not given to her for this purpose,"

• and who has "authority over the angels and the blessed in heaven,"

• including "assigning to saints the thrones made vacant by the apostate angels,"

• whom the good angels "unceasingly call out to," greeting her "countless times each day with 'Hail, Mary,' while prostrating themselves before her, begging her as a favour to honour them with one of her requests,"

• and who (obviously) cannot "be honored to excess,"

• and who is (obviously) the glory of Catholic people, whose "honor and dignity surpass the whole of creation." Sources and more.

Amazing how the Church of Rome gives Mary all of those attributes, yet claim they don’t worship her, but rather, they “venerate” her.

Catholicism presents Mary, the Mother of GOD, as “married” to but NEVER “copulating” with her husband.

There is no possible bridge to the muslim world. They want to eliminate non-muslims.

Daniel1212, it is beyond credibility that anyone can have such a documented belief in Mary—but that is what the Catholic church believes, and it is scary.

17 posted on 02/27/2021 8:48:29 AM PST by ConservativeMind (Trump: Befuddling Democrats, Republicans, and the Media for the benefit of the US and all mankind.)
[ Post Reply | Private Reply | To 13 | View Replies]
To: Old Yeller
Amazing how the Church of Rome gives Mary all of those attributes, yet claim they don’t worship her, but rather, they “venerate” her. Because they do not use one of the words that is used for what many engage in.
18 posted on 02/27/2021 9:33:55 AM PST by daniel1212 (Turn to the Lord Jesus as a damned + destitute sinner + trust Him to save + be baptized+follow Him!)
[ Post Reply | Private Reply | To 14 | View Replies]
To: ConservativeMind
Daniel1212, it is beyond credibility that anyone can have such a documented belief in Mary—but that is what the Catholic church believes, and it is scary.

Much due to the psychological appeal of a heavenly mother (especially among those for whom Scripture is not supreme).

As https://en.wikipedia.org/wiki/Heavenly_Mother attests, there is a strong psychological appeal to a Heavenly Mother. In Egyptian mythology there is the sky goddess "Nut." In the Ascended Master Teachings (a group of religions based on Theosophy) the Heavenly Mother is called Omega. Within Mormonism there is bwelief a Heavenly Mother as the wife of God the Father. In the Unification Church some members occasionally address God as "Heavenly Mother." Within the Unification Church sometimes God is addressed as "Heavenly Mother." The Korean group World Mission Society Church of God believes that Zahng Gil Jah is the spiritual wife of God making her the heavenly new Jerusalem Mother. In Hindism there is the worship of a Mother deity. Devī (the middle name of Kamala Harris) is the Sanskrit word for "goddess." The Rigveda calls the divine female power Mahimata (R.V. 1.164.33), literally Great Mother and also called Mother Earth. In places, the Vedic literature alludes to her as Viraj, the universal mother, as Aditi, the mother of gods, and as Ambhrini, the one born of the Primeval Ocean. Durga, the wife of Shiva, is a warrior goddess who represents the empowering and protective nature of motherhood. An incarnation of Durga is Kali, who came from her forehead during war (as a means of defeating Durga's enemy, Mahishasura). Durga and her incarnations are particularly worshipped in Bengal.

Collyridianism was a heretical Christian sect that worshipped the Virgin Mary as their Heavenly Mother and as a Goddess, which the Catholic Church condemned holding that Mary was to be venerated but not adored like God - though one would be pressed to tell the difference, and indeed, Mary seems to receive more popular devotion than Christ who created her.

Likewise the historical practice of Catholics has been to exalt Mary above that which is written. As the Catholic Encyclopedia states, "By the sixteenth century, as evidenced by the spiritual struggles of the Reformers, the image of Mary had largely eclipsed the centrality of Jesus Christ in the life of believers." (Robert C. Broderick, ed., The Catholic Encyclopedia, revised and updated; NY: Thomas Nelson Publishers, 1987, pp.32,33)

The practice of praying to departed saints and Mary was one that developed, helped by pagan influences, for Scripture provides no example of any believer praying to anyone in Heaven by the Lord, and reveals that doing otherwise was a practice of pagans, including to the “Queen of Heaven.” (Jer. 44:17,18,19,25). The Catholic Encyclopedia speculates that a further reinforcement of Marian devotion, “was derived from the cult of the angels, which, while pre-Christian in its origin, was heartily embraced by the faithful of the sub-Apostolic age. It seems to have been only as a sequel of some such development that men turned to implore the intercession of the Blessed Virgin. This at least is the common opinion among scholars, though it would perhaps be dangerous to speak too positively. Evidence regarding the popular practice of the early centuries is almost entirely lacking...,” (Catholic Encyclopedia > Devotion to the Blessed Virgin Mary) Yet, as expected, it imagines this practice came from the apostles and NT church, but which never exampled or instructed it, and instead showed that the believer has immediate access to God in the Divine Christ, (Heb. 10:19), who is the all sufficient and immediate intercessor between God (the Father) and man. (Heb. 2:17,18; 4:15,16) To the glory of God

“’The correctness of a formal and deliberate confession of faith is not always of itself a sufficient safeguard against error, in the habitual impression of the mind.

The Romanists flatter themselves that they are safe from idolatry, because they distinctly acknowledge the truth, that GOD only is to be served (namely, with latria), though they allow adoration (hyperdulia and dulia) to the Virgin and their saints, to images, and to relics.

To which it has been justly replied, that, supposing this distinction correct in itself, it would be in practice nugatory, since the mass of the people must soon, as experience proves, lose sight of it entirely in their habitual devotions.’

from “Sketch of the Life and Labours of J. N. Darby”
John Nelson Darby on “adoration” — (hyperdulia or dulia)