At the time, I was even more horrified than when the sacrilegious pagan Pachamama worship rite took place in the Vatican Garden as the Synod was opening up in October 2019.

What shocked me, outraged me and truly worried me even more was what happened during the Mass at the close of the Synod.  A bowl with symbols and flowers associated with the demon Pachamama was placed, at the explicit direction of Francis, on the altar of St. Peter’s Basilica, at the offertory, over the bones of St. Peter.  At the time I mused that this would not bode well and opined that Easter would not be celebrated there.

Not only no Easter, Francis commanded that the title Vicar of Christ be demoted to a “historical title”.  My post HERE

Sure enough.  The Wuhan Devil came.  Hand in hand…. rather… claw in claw with Pachamama the sacred liturgical worship which is what that altar is for, was removed.

Today I see a piece at LifeSite by Maike Hickson.

A symbolic sign after the Pachamama worship at St. Peter’s: Papal Altar unused for months now

December 18, 2020 (LifeSiteNews) – Something happened in the Vatican in the last months that has been largely overlooked: the High Altar of St. Peter’s – the Papal Altar, which is situated right on top of the tomb of St. Peter himself – has been left unused now for many months. Professor Armin Schwibach, a Vatican Correspondent who has lived in Rome for more than three decades, describes it as a “symbolic emptiness.” This fact comes in light of the coronavirus lockdowns, but also after Pope Francis, in October 2019, welcomed a bowl with earth dedicated to the false goddess Pachamama and placed it, against the liturgical rules, on that very altar.

Professor Armin Schwibach, a professor of philosophy in Rome and Rome Correspondent of the Austrian Catholic website Kath.net, posted on Twitter on December 17 a photo of the High Altar at St. Peter’s Basilica – the Papal Altar at which, generally, and this for centuries, only the Pope offers the Holy Sacrifice of the Mass – and he himself then commented: “The emptied and today unused papal altar. Now a kind of perceptible hole in the middle of the basilica.”

LifeSiteNews reached out to Professor Schwibach, asking him to explain the meaning of his commentary and photo. He told LifeSite that since the corona lockdown in the Vatican, the Pope has never offered the Sacrifice of the Holy Mass on this altar anymore. Instead, Pope Francis has offered Holy Mass, for example on Easter of this year, on the altar of the Chair of St. Peter, which is situated behind the high altar of the basilica, and only with a small congregation present. Here is a video of that Mass. The first minutes show how the High Altar is empty, and the altar behind it is being used. Also on December 12, the feast of Our Lady of Guadalupe, Pope Francis celebrated Mass on that other altar behind the High Altar, passing by the Papal Altar without visibly bowing to it. For all these months now, the Papal Altar has been abandoned, creating a “symbolic emptiness,” in Schwibach’s words.

The significance of the absence of the Pope at the Papal Altar lies not only in the fact that it is the papal altar per se and links the current Pope directly with St. Peter himself. It also lies in the fact that Pope Francis had, on October 27, 2019 – at the closing Mass of the Amazon Synod – placed on that very same altar a highly controversial bowl of plants that had been offered up to the false goddess Pachamama at the beginning of the Amazon Synod. Many saw in this bowl an occult sign, an offering to a demon, that was scandalously placed on God’s altar on which the Pope offers the Holy Sacrifice of the Mass.

Not long after this scandalous event, Pope Francis decided not to be called anymore in the 2020 Vatican Yearbook “Vicar of Christ,” giving this title the character of merely being a “historic title.” Instead, he placed his personal name on top of his entry, Jorge Mario Bergoglio. In the 2019 Yearbook, his entry was still entitled “Vicar of Jesus Christ.” Professor Schwibach at the time commented on twitter: “It seems that they continue to dismantle everything.”

Here a summary of the events since last year’s Amazon Synod: First the Pope had blessed a sacrifice that had been offered to a false god, and then he placed it on the very altar on which he usually offers the Son of God to God the Father. In the 2020 Yearbook, he declines to be called “Vicar of Christ.” The coronacrisis breaks out, which is then being used by government authorities to close down churches and restrict Mass attendance, along with the Pope’s collaboration and approval. Then the Pope stops altogether celebrating Mass on that very same Papal Altar on which he had earlier placed the Pachamama bowl. His Christmas Vigil Mass is not even a midnight Mass, but will take place at 7.30 p.m., due to the existing curfew rules in Italy (even though the Vatican is its own city-state and the Pope is its head). The result of these papal acts are that now in many places in the whole world the Christmas Midnight Mass, commemorating the birth of the Christ-Child, has been cancelled. One may ask whether there is a connection between all of these events: that is to say, from the Pachamama bowl on the Papal Altar to the cancellation of the Christmas Midnight Masses in many parts of the world.

Professor Schwibach has caught up to the rest of us… or perhaps he is just being reported now.

The fact remains that a demonic cult bowl was placed on the altar of St. Peter’s after a dreadful pagan demonic worship rite took place in the Vatican Gardens, during which a shaman of a false demon religion seems to have put a curse on Francis’ hands with dirt from the cult bowl.

Now, no Masses at the heart of the last vestige of Christendom.

HERE IS A STRONG ADMONITION

The young Austrian man who took the pagan idols out of the church and threw them in the Tiber had the right instinct.

Objects that are cursed, that are used in demonic rites, etc., maintain their influence long after the fact.

These objects, to be overthrown, should be broken, burned and the ashes or fragments put into running water, such as a river.  This is the advice of exorcists.

This is real stuff, friends.   No joke.

That damned bowl… WHERE IS IT NOW?   Who has it?  Was it kept in Rome at St. Peter’s?  Did it go back to some place in South America?

I think they use it for salsa at the Qanon office.
Maybe guacamole, who knows. 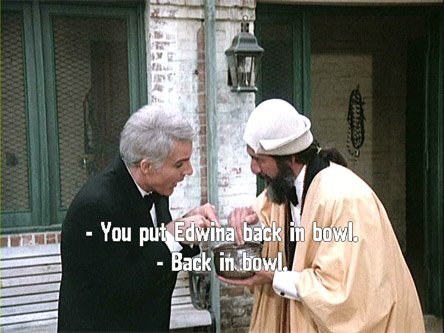 The coronacrisis breaks out...Then the Pope stops altogether celebrating Mass on that very same Papal Altar on which he had earlier placed the Pachamama bowl.

I thought Francis never used the altar again after he placed the bowl on it, not just after coronavirus. Am I remembering wrong?

5 posted on 12/20/2020 1:22:48 PM PST by BlessedBeGod (To restore all things in Christ~~Appeasing evil is cowardice~~Francis is temporary. Hell is forever.)
[ Post Reply | Private Reply | To 1 | View Replies]
To: ebb tide
"Pachamama worship rite. A bowl with symbols and flowers associated with the demon Pachamama.."

I really glad that I have no idea what that is...

That interchange cracked up me and my late wife. “Back in bowl” was an inside joke between us.

It’s in the Pope’s private shrine to Ba’al?

Hangin’ with the Pokemon cup and Pacman saucer?

I worked out the CLUE.

On the altar of the Chair of St. Peter

(Where the Pope says Mass for his REAL deity.)

How about the Audience Hall. Any thoughts of what is worshiped there?

I think they use it for salsa at the Qanon office.
Maybe guacamole, who knows.