The presidential instruction was published on the Kremlin's official website on Friday, following Putin's recent meeting with representatives of religious groups.

The Foreign Ministry has also been told "to consider the possible conclusion of international agreements and (or) the adoption of a UN General Assembly resolution on such matters."

Ismail Berdiyev, the head of the Coordinating Center of Muslims of the North Caucasus, who attended Putin's meeting with religious leaders, proposed bringing the matter up at the UN Security Council to prompt all countries to adopt legislation against actions insulting believers' religious feelings.

The day may come when Putin is more a defender of religious freedom than the US.

If it said Assaulting people because of their faith, they would have something.

But insulting...that’s all about islam.

Putin knows that this will mainly apply to muslims.

And he’s good friends with some muslim countries so that makes sense.

Putin is ont the next hero defending Christianity

Ion Mihai Pacepa, the highest-ranking Soviet-bloc official ever to defect to the West, writes: “Liberation theology has been generally understood to be a marriage of Marxism and Christianity.

Its genesis was part of a highly classified Party/State Disinformation Program, formally approved in 1960 by KGB chairman Aleksandr Shelepin and Politburo member Aleksei Kirichenko, then the second in the party hierarchy after Nikita Khrushchev.”

Adds Pacepa: “In 1971, the KGB sent Kirill — who had just been elevated to the rank of archimandrite — to Geneva as emissary of the Russian Orthodox Church to the World Council of Churches.... Kirill/Mikhailov’s main task was to involve the WCC in spreading the new liberation theology throughout Latin America.

In 1975, the KGB was able to infiltrate Kirill into the Central Committee of the WCC — a position he held until he was “elected” patriarch of Russia, in 2009. ...” 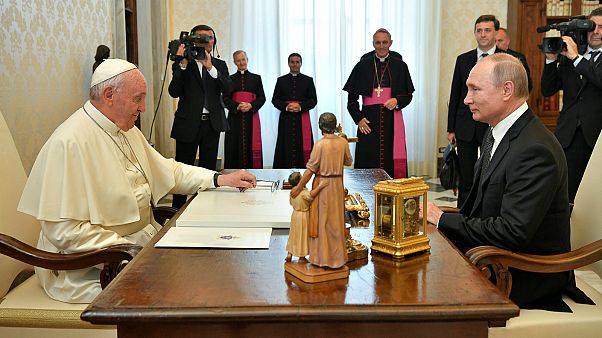 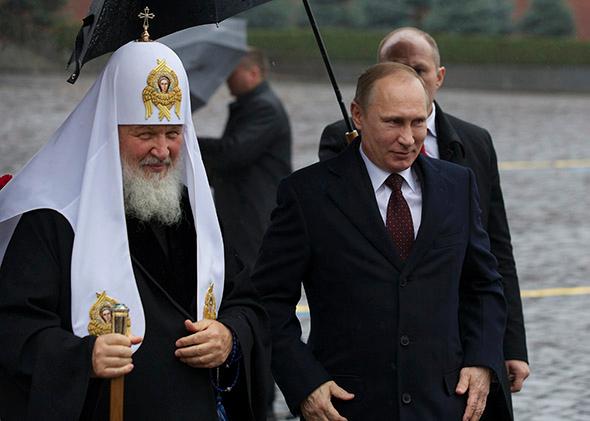 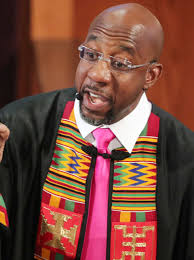 There he earned advanced degrees and found a mentor in the Rev. Dr. James H. Cone, father of Black liberation theology ...”

“Black theology will accept only the love of God which participates in the destruction of the white enemy. What we need is the divine love as expressed in Black Power, which is the power of black people to destroy their oppressors here and now by any means at their disposal”.

The Black church and Marxism: what do they have to say to each other

SEAN HANNITY: But Reverend Jeremiah Wright is not backing down and has not for years and in his strong stance on the teaching of black liberation theology is nothing new. He had the same things to say last spring when he appeared on “Hannity and Colmes:”

HANNITY: But I’m a — reverend

The Gospels were re-rendered not as doctrine impacting on the human soul but rather as windows into the historical dialectic of class struggle. These “liberation theologians” saw every biblical criticism of the rich as a mandate to expropriate the expropriating owners of capital, and every expression of compassion for the poor as a call for an uprising by the proletarian class of peasants and workers. ...”

Yep, but my statement was less a praise of Putin than an expression of frustration at the direction we are taking.

Yet right now in Russia, they are jailing Jehovah’s Witnesses for two years or more, raiding their homes, and banning their literature. Other religious organizations are being targeted as well. Putin’s gesture is hypocrisy and the US has a long way to go before reaching that level of persecution.

The first-ever Russian Orthodox church will open in Pyongyang, North Korea this weekend.

Its an odd project considering that freedom of religion exists almost exclusively on paper in the closed communist country.

North Korean dictator Kim Jong-Il is supposed to be a communist atheist.

So why has he made promoting the Russia Orthodox Church his latest pet project?

On August 13, the countrys first Orthodox church is to be opened in the capital city of Pyongyang.

Russian Metropolitan Bishop Kyrill, second in command within the Church after the Patriarch, will travel to Pyongyang to christen the new house of worship. ...

The two chose communist Cuba to showcase their unity.

Guess I need to do an updated version.

Christians in Russia have said they are determined to preach the Gospel and fulfill the Great Commission despite tough new laws signed by President Vladimir Putin that ban evangelism outside of churches. ...”

‘Will require any sharing ... even a casual conversation, to have prior authorization from state’

“Activities as diverse as holding prayer meetings in homes, posting worship times on a religious community’s website, and giving a lecture on yoga have all been interpreted by police and prosecutors as “missionary activity”, thanks to the broad definition now enshrined in the Religion Law.

Despite a clear predominance of prosecutions brought against those who see their faith as requiring them to publicly share their beliefs, such as Protestants and Jehovah’s Witnesses, people from at least 15 different religious traditions have faced charges.” ..."

On 6 July 2016, President Vladimir Putin signed amendments to the Religion Law imposing harsh restrictions on the sharing of beliefs, including on where and by whom they may be shared. ..."

Name calling is so mature.

Someone obviously missed my point and my followup, but why read? I said “The day may come when Putin is more a defender of religious freedom than the US.” That should be a scary thought not read as praise.

We may well be doing similar things as Russia here if we keep going in the direction we are. Even now we have threats of arrest for religious gatherings that violate social distancing while rioters/looters have free reign. I’m losing faith in SCOTUS to defend the Constitution (thank you CJ Roberts). Who is going to defend religious freedom here?

Then again, maybe I am just a know-nothing idiot.

Fair enough. I apologize.
I sometimes jump the gun this way because we do in fact have a group of people here that defend all things Russia and Putin. You find them on most all of these threads. Why they are allowed to remain here is a mystery to me.
Again, sorry. :)

Thank you for that and from my side I should have made it more clear from the outset where I was coming from. I had just spoken to a Jewish friend in NY earlier and he was telling me some of the things Comrade Deblasio had done to his community and I had that on my brain. Next time I do that just ask me to clarify before being declared an idiot. Sometimes, however, I may prove the idiot part true even after explaining. LOL

Just curious: Why the unhealthy obsession with Russia, but no criticism of our most dangerous enemy, China?

BTW, The Orthodox Churches, along with the Catholic Churches, are the oldest Christian Churches.

Thank God that I’m not a Calvinist.

Blasphemy laws are evil, an opening allowing the secular state to intrude and meddle in the realm of religion, assuming for the state that which belongs to God; that’s why Putin and Hillary Clinton and all manner of dictators are fond of them, and will go to great lengths to befuddle people who think they are spiritual into supporting the gutting of their own liberties. One cannot “defend religion” with blasphemy laws against the freedom of speech. Without freedom to speak one’s conscience there can be no freedom of worship either.

There is nothing “unhealthy” about it. If you want to add criticism of China by all means do so, but the thread, to be fair, is about Putin and Russia and a long term goal [of Turkey’s Erdogan] to establish blasphemy laws globally.

Putin’s not the only communist pushing for this junk:

HOUSE DEMOCRATS MOVE TOCRIMINALIZE CRITICISM OF ISLAM
12/29/2015, 12:26:08 PM · by Whenifhow · 107 replies
Front Page ^ | Dec 29 2015 | Robert Spencer
December 17, 2015 ought henceforth to be a date which will live in infamy, as that was the day that some of the leading Democrats in the House of Representatives came out in favor of the destruction of the First Amendment. Sponsored by among others, Muslim Congressmen Keith Ellison and Andre Carson, as well as Eleanor Holmes Norton, Loretta Sanchez, Charles Rangel, Debbie Wasserman Schultz, Joe Kennedy, Al Green, Judy Chu, Debbie Dingell, Niki Tsongas, John Conyers, JosÃ© Serrano, Hank Johnson, and many others, House Resolution 569 condemns “violence, bigotry, and hateful rhetoric towards Muslims in the United States.” The...