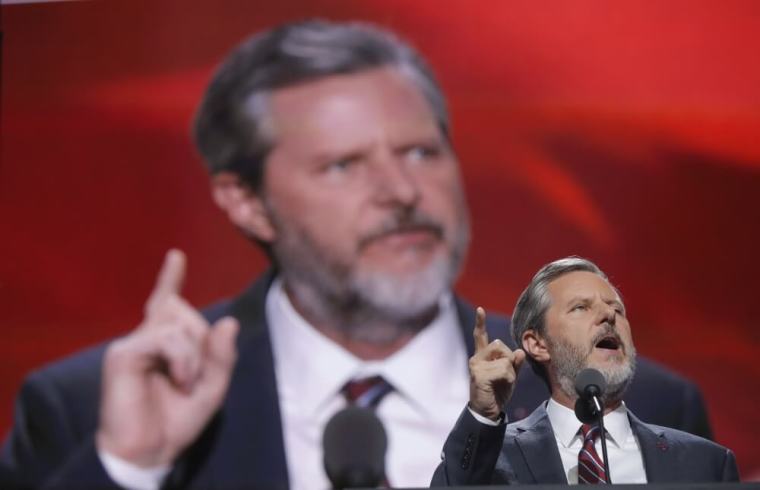 
Jerry Falwell Jr. agreed Friday to take an “indefinite leave of absence” from his roles as president and chancellor of Liberty University at the request of the board of trustees.

“The Executive Committee of Liberty University’s Board of Trustees, acting on behalf of the full Board, met today and requested that Jerry Falwell, Jr. take an indefinite leave of absence from his roles as President and Chancellor of Liberty University, to which he has agreed, effective immediately,” the university said in a statement released Friday.

The board's request came days after Falwell expressed regret over posting a photo of himself at a costume party on a yacht during his family's vacation that showed him wearing unzipped jeans with his underwear exposed, belly pushed out, and right arm around the waist of his wife's assistant whose shorts were also unzipped.

In a statement to The Christian Post late Friday, Pastors Chris Williamson, Eric Carroll, and Maina Mwaura, the organizers of a June 1 letter to Falwell by 35 African American pastors, ministry leaders, and former athletes who graduated from Liberty University and warned they'd stop donating to the university because they disagreed with Falwell's political rhetoric and activism, said his leave of absence was the right decision.

"We believe the Board of Trustees made the right decision in asking Mr. Falwell to take a leave of absence, and we are praying for him, his immediate family, and our entire Liberty family during this season. First and foremost, it is our desire that Mr. Falwell would experience healing and restoration that only God can give. Liberty is a special place, and the God that we serve is a powerful God to lead the school into its next season. Liberty University deeply impacted us as students and we hope that its leadership can return to a focus of training 'young champions for Christ' with Biblical conviction for the Gospel and justice."

Friday evening, Rep. Mark Walker, R-N.C., a former pastor of 16 years who also worked at Liberty University as a guest lecturer on mentorship and administration, said on Twitter: "I pray for Jerry Jr. and the Falwells, and I take solace in the Christian principle that forgiveness and redemption is available to all."

Walker added: "Though not easy, this is the right call for @LibertyU students & family. Liberty is such an important institution to our nation, our next generation of leaders & faith. The Liberty family impacts the world every day for things that are good and righteous."

Earlier on Friday, before the board announced its decision, the congressman called on Falwell to step down. "Jerry Falwell Jr’s ongoing behavior is appalling. As a Music Faculty Advisory Board Member and former instructor @LibertyU, I’m convinced Falwell should step down. None of us are perfect, but students, faculty, alumni and @LUPraise deserve better," he wrote in a post on Twitter.

In an interview with the WLNI radio program "MorningLine" Wednesday, Falwell explained the context of the photo that he posted on Instagram last weekend and subsequently deleted, saying that his wife’s assistant is pregnant and was unable to zip up her shorts.

“She’s pregnant, so she couldn’t get her pants zipped,” he told the Lynchburg radio station. “I had on a pair of jeans I haven’t worn in a long time, so I couldn’t get mine zipped up, either. And so, I just put my belly out like hers.”

Falwell went on to say, “I should never have put it up” and “embarrassed her,” adding that he has “apologized to everybody.”

“I promised my kids I’m going to try to be better,” he added, noting that he and his wife were on vacation and it was a costume party. “I’m going to be a good boy from here on out … it was just good fun, that’s it.”

The image garnered extensive attention after Robert Downen, a religion reporter with The Houston Chronicle, posted it on Twitter Sunday.

"Lots of good friends visited us on the yacht. I promise that’s just black water in my glass. It was a prop only,” Falwell wrote in the caption of the now-deleted photo along with other images of the costume party inspired by the long-running comedy series “Trailer Park Boys." The comedy actors are known for setting a record for the highest number of f-words in a film by saying the curse word 935 times in "Swearnet."

Some charged Falwell with hypocrisy, citing among other things Liberty University’s code of conduct that prohibits students from consuming media that contains “lewd lyrics, anti-Christian message, sexual content, nudity, pornography” either on or off campus.

Conservative commentator Matt Walsh at The Daily Wire noted on his podcast Wednesday that the problem with Falwell's actions is that Liberty students could be expelled and have in the past been penalized for participating in similar activities. "It's extremely poor leadership ... to publicize yourself doing the very thing you punish other people for doing," Walsh said.

TOPICS: Evangelical Christian; Moral Issues; Religion & Culture
KEYWORDS: jerryfalwelljr; leave; libertyuniversity; searchandfind Navigation: use the links below to view more comments.
first 1-20, 21-35 next last
1 posted on 08/07/2020 6:35:39 PM PDT by SeekAndFind
[ Post Reply | Private Reply | View Replies]
To: SeekAndFind
I think it’s funny 😄 You are a complete moron dude. I’m like out VP NEVER EVER alone with another woman. Ever
2 posted on 08/07/2020 6:39:20 PM PDT by Truthoverpower (The guv-mint you get is the Trump winning express ! Yea haw ! Trump pence II!)
[ Post Reply | Private Reply | To 1 | View Replies]
To: Truthoverpower

Question: Was there a red Cadillac with big tail fins?

Answer: No-It was a Volkswagen with 2 flat tires.

If you read the explanation it probably was innocent. It’s his wife’s pregnant assistant, a costume party, and his wife or her husband probably took the picture.

A generation of low brow and gross out comedy has led to the loss of a sense of personal dignity that used to be a mark of responsible adulthood. Fundamental cultural norms though cannot be flouted indefinitely and tend to be reasserted in inconvenient ways. Jerry Falwell, Jr. now offers an instructive example that may become a spur toward the renewal of American culture.

Uh...duh..this has been going on since Jesus times sin is not new.. it’s just more out there now with less norms and societal structure

there is nothing good or spiritually healthy about the whole event. Christians becoming more worldly never ends well.

It’s a mistake but maybe nothing at all was going on with that woman.

Fallwell’s lapse was not so much a sin as a making light of sin by mocking those who embrace it.

Falwell jr was a warrior coming out and supporting Trump in 2016. I hope he overcomes this.

This is his problem. He's not a boy he is a 58 year old husband and father of three grown children plus the President of a Christian University. He should step down permanently and let a grown up lead the University.

The impact of his action will only cause profound embarrassment and regret not to mention fodder for the comedy circuit.

3But among you, as is proper among the saints, there must not be even a hint of sexual immorality, or of any kind of impurity, or of greed. 4Nor should there be obscenity, foolish talk, or crude joking, which are out of character,

He chose poorly. Not judging. Not condemning. Just saying.

Nothing to see there, despite how far down his zipper was.

It doesn't matter that it was innocent. What matters is this picture will hound him the rest of his life, his enemies will use it against him, and it shows clear lack of judgment.

It's a senseless, self-inflicted wound.

Come on.....that was in really bad taste. Poor judgement even if it was intended to be humorous. Frankly ‘the actions’ aren’t something I’d expect to be seen coming from Liberty’s Leader.