President Trump’s popularity with Christians in America is off the charts. In addition to his unyeilding support for Israel, he is the most pro-life president in the history of the United States. Pastors and priests from a variety of churches across America have praised Trump for his courage to stand up for Christianity in the face of criticism and hatred from the left. Shawn Bolz, a prominent pastor in Los Angeles who has prophesied about many things from Kanye West to President Trump, told Fox News his number one mission is to make hearing from God normal for everyone.

The 45-year-old Christian author and speaker acknowledged that when most people think of prophecy, or “hearing from God,” they picture a subgroup of people like the bad guys in a zombie film, but “we’re trying to rebrand and dignify what it is to walk with God.”

The “Translating God” author uses his prophecy about West to help teach others. West had a very public conversion in 2019 as a born-again Christian, holding Sunday Service events with a choir. The rapper-turned-gospel artist released his “Jesus Is King” album toward the end of the year.

Roughly four years ago, when West was hospitalized after suffering a breakdown, Bolz publicly declared several times “we aren’t ready for the coming influx of new Christians…God showed me Kanye West as a prophet and worship leader in Christianity.”

At the time, most people couldn’t even imagine such a conversion, yet the nation has witnessed it, and Bolz believes God is going to continue changing the Kardashian family.

“We are all, as humanity, wired to hear from God – both people who know Jesus and don’t know Jesus,” Bolz said, citing the book of Daniel as an example. “A lot of the way we hear him is through symbols, signs, and dreams, but we can hear him in so many different ways.”

Bolz has another high-profile prophecy about President Trump, who is largely supported by evangelicals.

“I felt like Trump was going to be president twice and that he would have an encounter in his second term, more of an encounter for God and who he is and for his family,” Bolz said. “There’s going to be more boldness in the second term and it’s going to be disruptive, but I think it’s helpful because there’s so many systems in place that are old and tired, and need to be knocked down.”

Last month, we reported about another powerful pastor who made a powerful prediction about President Trump.

Kim Clement, a self-proclaimed prophet appeared in a powerful video that combines two video clips from 2007 and 2014. In the video, Clement prophesizes about a number of events that will take place in the future, after God puts his chosen leader in place. In this stunning video, Clement claims to prophesize about a series of events, many that have taken place since President Trump was elected. Clement died two weeks after President Trump won the 2016 election.

“Hear me, for I have found a man after my own heart.” He begins.

Clement says that two Supreme Court Justices would step down while God’s chosen leader was put in place, and that “righteousness” would be restored.

“There are highly embarrassing moments that are about to occur, for many, many politicians in this nation,” adding, “There will be a shaking amongst the Democrats in the upcoming elections, but unsettling for the Republicans.”

“Why is God doing this?” he asked. “For God said I am ‘dissatisfied with what emerges from both parties.”

Incredibly he speaks about the Democrat’s efforts to impeach President Trump, saying, “They will shout, ‘Impeach! Impeach!’

Clement added, “This nation shall come very suddenly, but he shall not come in the time of Obama. ‘They shall come when this new one arises, my David, that I have set aside for this nation.'”

Clement correctly identified Hillary Clinton as Trump’s adversary in the election, saying, “The Enemy Will Do Everything In His Power To Put A Witch In The White House.”

“For this shall be dismantled, so there will be no more corruption in the White House.” The clip then moves to an April 4, 2007 voice clip of Clement speaking directly about Donald Trump.

“It shall come to pass, that the man I place in the highest office will go in whispering my name. But God says when he enters into the office, ‘he will be shouting out by the power of the Spirit. And I shall fill him with my Spirit when he goes into office. And there will be a praying man in the highest seat in your land.”

“There will be a praying president, not a religious one, for I will fool the people. Yes, I will. God says, the one that is chosen shall go in, and they shall say, ‘He has hot blood.’ For the Spirit of God says, ‘Yes, he has hot blood, but he will bring the walls of protection on this country in a greater way and the economy of this country shall change rapidly,’ says the Lord of Hosts.”

“God says, I will put at your helm for two terms a president that will pray, but he will not be a praying president when he starts, I will put him in office and I will baptize him with the Holy Spirit and my power, says the Lord of Hosts.”

Every media outlet predicted Hillary would crush President Trump in the 2016 election. No one believed he would win. He won in a landslide. 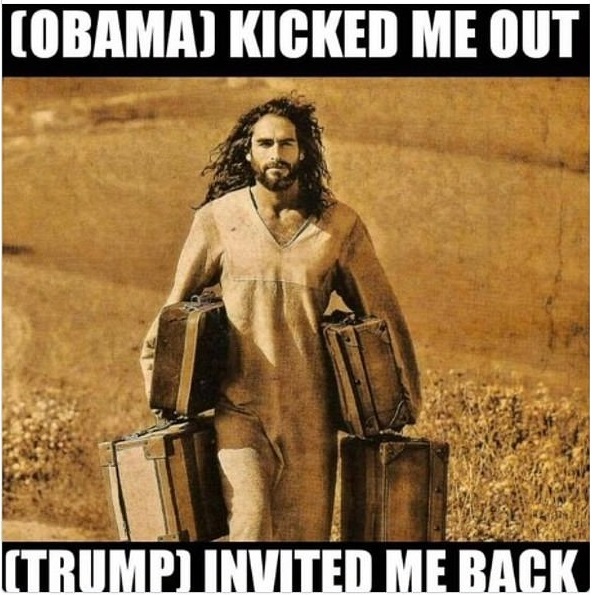 Hope these prophesies are correct. No prophet myself, but President Trump certainly has been a revelation.

I believed Trump would win.
He will win in a historic landslide in November.

The Long-legged Mack Daddy sure didn’t like people clinging to their religion and guns (to defend themselves).

If he thinks he is a prophet of God he needs to remember what happens to them if they miss one part. These people are not of God in my thinking, but are serving mammon.

And about those Christians on their high horse - 0bozo had to bring in the Crusaders of the twelfth century to justify his statement.

9 posted on 02/13/2020 2:18:59 PM PST by SkyDancer ( ~ Just Consider Me A Random Fact Generator ~ Eat Sleep Fly Repeat ~)
[ Post Reply | Private Reply | To 7 | View Replies]
To: SkyDancer
It is neither accidental nor insignificant that the Democrat Party has the endorsement of atheists, satanists, and witches (who have repeatedly attempted to place a hex on President Trump).

The Democrat Party is truly the Party of Hate and Evil.

I remember Obozo announcing the USA “was no longer a Christian nation”.

Do you agree with this defination of what this pastor is doing is “prophecy”?

Exactly - look whom they have running against Trump.

Kanye did NOT have a breakdown. He had an epiphany, and decided to spill the beans on the corruption within the music industry with a long rant during a Sacramento concert. They locked him up on a California 5150 and drugged him. Immediately upon his release jump on a plane and had a meeting with then President elect Trump.

The REAL Chickens, will be coming back home TO ROOST!!

Almost everybody in that photo besides the president looks to be between 34 and 44 years of age. IOW, it’s good to be reminded that there is a Generation X filled with happy and hopeful Christian voters.

Maybe it will be a slap in the face to the Dems to end the hateful identity politics that they love so much.

He died in 2016, two weeks after Candidate Trump won the election. The prophecies were from 2007 and 2014, according to the article.

Absolutely not. While I certainly hope that what he claims will happen with respect to Trump ends up occurring, he is in no way a prophet. Nor is anyone else in this present age. There are no present-day apostles, either. We have the canon of scripture for a reason. Today, THAT is how God speaks to us. While He certainly guides our steps, if we let him, He is not presently giving direct revelation to anyone. That is what scripture is for.

I think of the Bible as being similar to the Constitution: Both were intended to lock down in writing certain concepts, precepts, and guidance, so that the fundamental questions of life were not subject to the whims of any individual person. Without total reliance on the Bible as God’s revelation to us, then anyone running around claiming to possess direct revelation must be simply accepted at face value, even when that person’s “prophecy” conflicts with that of another “prophet” (which happens all the time). If all it takes for revelation from God to exist is someone claiming to possess it, then we would have utter chaos in the church, limited only by the imaginations of those who fancy themselves “prophets.” That’s pretty much where we are today, sadly.