‘He Was So Shiney and Bright’: Muslim Details Miraculous Conversion After Jesus Visited Him (TR)
Faithwire ^ | September 23, 2019 | Lindsay Elizabeth 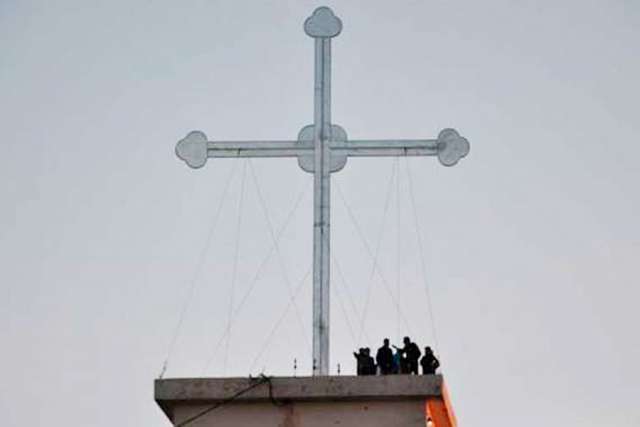 On Wednesday night, Pastor David Platt of McLean Bible Church hosted a simulcast called Something Needs to Change, part of an ongoing initiative from The Gospel Coalition.

In the simulcast, Platt, an author and former president of the Southern Baptist Convention’s International Mission Board, shared an interview with a missionary named Yazim.

“He lives and works in a part of the Middle East where, not only is it illegal to share the Gospel, it’s life-threatening to talk about how the Gospel is advancing,” Platt shared.

In the simulcast Yazim, a Middle East church planter shared with Platt and the listeners through a disguised voice how, “God is moving inside the Middle East with dreams, visions, and personal visitations.”

Yazim shared one incredible story in particular of a Middle Eastern man who came to know Jesus through a miraculous way.

“This man said this to us when we visited him: ‘A man wearing all white knocked at my door every night and I couldn’t look at him because his face was so shiny and bright,'” Yazim shared. “‘When he would come inside, he asked me to write down what he said. As I wrote, I fell asleep. The next night, he would come again for the next month.'”

The man, who lives 50 kilometers outside of an unnamed city shared his notebook with Yazim to show him what he had written down.

The man’s notes came from the book of John, which God had revealed to him in

“shiney” is not a word

Shouldn’t it be “former Muslim”?

The child who saw Him said he smelled like rain

He must have meant articulate and bright. No wait. That would not be Jesus. That would be Barack Obama.

No wait again. Obama IS Jesus.

Per the average democrat.

That is ALL you got from the story?

Of course not. It was just the first thing I got.

I knew a Gideon member who told me of a conference in NYC where a prisoner was allowed to come and speak of his conversion experience. He was a hardened criminal with mental issue and a very violent temper and a killer but was illiterate and close to retarded. He said one night that “the dude came with a book and asked him to read it but the prisoner said he couldn’t read it.(he had been in solitary or a cell to himself apparently) So “everynight the dude would come and teach him to read slowly over a period of several months out of this book”.As he learned to read with the help of “the dude” the prisoner came to know the love of Jesus and became a Christian for he had gained a working reading knowledge of English through the King James Bible!!!

The prison officials were aghast at the drastic changes in the prisoner and astonished at his ability to read and no one ever could figure out who “the dude” was or ever saw him on camera or how anyone named “the dude” had slipped him a Bible. ‘The dude” apparently stopped visiting though Jesus had become a permanent part of the prisoner’s life.

The last I had heard of this story, the prisoner had been allowed to leave the prison to go on these conferences and he would go back and check himself back in at Rikers. This was about 19 years ago. I don’t know if he has since been let out or has passed away. I think he was in for at least a very long time but why he wasn’t upstate I don’t know, might have been considered more of a mental health case than a hardened prisoner.

This probably isn’t a good idea, but reading this makes me feel like telling a story. I don’t think I’ve written this down before, but it goes like this.

A couple of years ago, I was feeling down and experiencing some pain in my lower left thorax area. I had been praying about things, not sure if I should expect an answer or not. You know how that goes sometimes.

Well, one night, I was sleeping, as one tends to do at night, and I had this dream. I was driving along a darkened road, near ‘home’, and it was very dark. So dark that I almost couldn’t see. I pulled off the road, and suddenly, to the East was a light so bright that it was blinding, coming up over the hills that shouldn’t really have been there, but dreams are like that sometimes.

Anyway, I got out of the car, and a crowd of people had gathered. We were all looking up at the bright light, and it was a man. I’m sure you can guess who. I looked to my side, and there was a man next to me, bright, but not as bright, if you know what I mean.

Then he reached out and touched me on the shoulder and said, “Be healed.” In my dreaming mind, I thought to myself, “That was an angel.”

That was a year or two ago, and funny thing is, my left side isn’t hurting anymore.

Now, normally, I stick to saying snarky things here on FR, mostly to try and have a little fun, lighten the mood. Maybe try to make people think a little.

This is a little different. Like I said, I’m not sure if it’s a good idea to write this down, or to post it here, but reading this story made me feel like saying something, so here it is. Believe it or not, that’s your choice.

Either way, I think it is quite possible that what we are seeing is that events are proceeding, and possibly even accelerating toward that final event.

But people have been saying that for at least the last 100 years, so … you’re not getting a timetable from me.

But I will say one last thing. People have tossed around that President Trump has been called by God to be President in this time. I think that there might just be something to that, and if one looks at the other side, and their all too obvious intentions, well, what do you think?

I’ve been a trucker more than 20 years, from the Charleston Coast to the Jersey piers, sharing the road with race car nuts and loggers. Sunday drivers, scouts on hikes, hell’s angels on harley bikes, i never met a roader i didn’t like, except those, joggers.

This is a sign of the last days. God is reaching out to those places closed off to all others. Jesus is gathering the last harvest. Maranatha1

Made a new word.

I have no way to verify the story behind the posting. I’ve seen other postings like it from ministries supposedly on the ground in the Mideast who are reporting these amazing miracles, dreams and visions, at the end is a announced need for funding to get 5 churches off the ground and that sort of thing. I confess I would like the stories to be true. Yet I feel a bit of a caution....

I do know this, if an individual known to me or can be verified by others to be muslim, but otherwise not very educated and would have no inkling of what the Bible was all about except that the local imam said the book was HARAM, told me a story like the thread posting then I would sit down and very carefully listen again to the facts. I would be inclined to believe him and further explain the way to salvation to him. The book of John in it’s first chapter speaks of God as the word. The first chapter says also something very significant...”and the word became flesh and dwelt amongst us”.

Why is that important in verifying the story? If we cross reference to 1John 4(yup a letter of John again) It describes the test that is to be put to doctrines of men, spirits and angels....does the spirit in question acknowledge Christ as coming in the flesh(?); if it doesn’t that doctrine was not to be listened to and the teachings disavowed. Yet we see that the man so described in the posting had a notebook with the complete book of John which includes the little ditty of the “the word was made flesh and dwelt amongst us”.

I know if an angel or Christ himself did that to me and then said...oh by the way underline the phrase “and the word was made flesh” and take the notebook to Pastor so and so who lives on Straight Street and he’ll tell you what to next”......I’ll tell you what I’d do!
I’m gonna get there as fast as possible, that’s what I’m gonna do for I would know from that time, on my life as I knew it before, was going to change in ways I could never imagine.

The Book Of John. I have read it at least 3 times and I have been reading it again. My favorite book...by far!

On Firefly it is.

Oh the lady engineer...heheh! “I fixed the engines...it’s all shiney captain!”