The British government has refused to say whether telling people about the Christian faith could be a hate crime.

Lord Pearson of Rannoch, a UKIP peer, says when he raised a question on the issue on the House of Lords, the government failed to state clearly whether Christians cannot be prosecuted just for stating their beliefs.

“I said to the government ‘Will they confirm unequivocally that a Christian who says that Jesus is the only son of the one true God cannot be arrested for hate crime or any other offence, however much it may offend a Muslim or anyone of any other religion?'”

In response to the question, government whip Baroness Vere of Norbiton said: “My Lords, I am not going to comment on that last question from the noble Lord.” She added that the legal definition of “hate crime” has been the same for the past 10 years.

Speaking to Premier Christian Radio, Lord Pearson said the refusal to comment was “pretty unique” and “makes one very worried”.

He said the current definition of “hate crime”, which relies on whether the victim feels offended, was “stupid” and called for the law to be clarified.

“Certainly the stricter Muslims do feel offended by Christianity and our belief in Jesus being the only Son of the one true God,” he added.

Interesting stuff, there. One wonders how long defining “hate” as, “I believe A is true, but you believe A is false,” will be sustainable.

Islam has no problem in so many eyes being an offense and a blasphemy against the only begotten Son, and they don’t consider it a hate crime though it is the root of and nourishment for most terrorism today.

Not to mention the slave trade such as it still exists....

Satan would think so. And a lot of liberals.

This is a facet of the British policy that does not recognize truth as being a defense for libel. Even though you speak truth about some one or some thing, they can still take you to court for, I assume, your intentions.

But that or something like it seems baked into our hate crime legislation, too, where ‘intent’ can be divined and parceled out depending on race.

They had better be careful. Much of the Koran could be deemed a hate crime based upon their criteria and they wouldn’t want to offend their favored minority group.

Claims about the divinity of Christ are not susceptible to truth claims in court. "You were at Harrod's on July 12!" "I was not!" It's either true or it's not.

It makes much more sense, legally, to treat these as opinion statements.

Hate speech is speech that does not affirm protected lifestyles.

For example, gay groups complain about Christmas movies that only have straight people in them.

Those movies don’t attack anyone, they simply refrain from affirming gays.

9 posted on 12/15/2017 6:05:47 PM PST by Architect of Avalon
[ Post Reply | Private Reply | To 1 | View Replies]
To: marshmallow
A person who uses threatening words or behaviour, or displays any written material which is threatening, is guilty of an offence if he intends thereby to stir up religious hatred

(The text of the law in question.)

This from a country which has a whole national holiday devoted to stirring up hatred of the Pope, Catholics, and Catholicism.

It’s the UK which is not surprising. Now, if you questioned MoHAMmad you’d be brought up on hate crime charges.

““Certainly the stricter Muslims do feel offended by Christianity and our belief in Jesus being the only Son of the one true God,” he added.”

Ok yeah. And no one is ‘offended’ that Muslims state Allah is the one true god and his only true prophet Mad Mo. The only offence comes from the protected class. Demonstrating once again the insanity of liberalism and the left.

Where this world is heading just blows me away.

The sooner, the better.

Once they do that stick a fork in them.

The British government has refused to say whether telling people about the Christian faith could be a hate crime.

In England, the KJV rights are invested in the Crown. 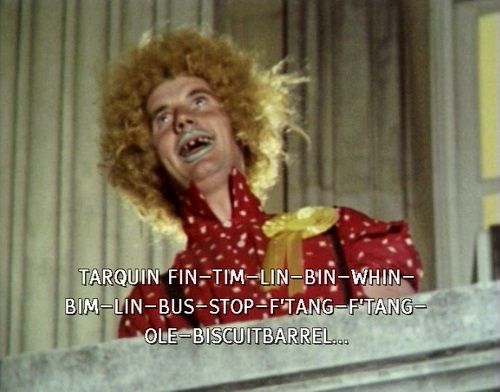 16 posted on 12/15/2017 6:39:33 PM PST by DoodleBob
[ Post Reply | Private Reply | To 1 | View Replies]
To: Campion
This from a country which has a whole national holiday devoted to stirring up hatred of the Pope, Catholics, and Catholicism.

Well, I was guessing Guy Fawkes Day, and I guess that must be it ...

"Within a few decades Gunpowder Treason Day, as it was known, became the predominant English state commemoration, but as it carried strong Protestant religious overtones it also became a focus for anti-Catholic sentiment."

The Second Person of the Holy Trinity, of One Substance With The Father.

My All in All, My Savior, My Lord, My Master, My Redeemer, My Friend, The Propitiation for My Sins, My Wonderful, Counselor, Almighty God, Everlasting Father, Prince of peace, God With Me, Emmanuel, My Bridegroom, My Advocate, My Mediator, My Resurrection and Life, The Way, The Truth, The Life, The Author and Finisher of My Faith, My Mediator, My Judge, My King, My Light and My Salvation, My Shepherd, My Big Brother, My bridegroom, My Rock and My Fortress, My Strong Tower, My Faithful and true Witness, My Light, My Beloved, My High Tower, My Savior.

Not yet here, I don’t think.

But keep that up and they’ll want to make it one.

These Brits have eaten too much cow brain...ergo...mad cow disease.