Rome, Italy, Mar 15, 2013 / 11:38 am (CNA/EWTN News).- He thought it was a joke. The young doorman at the Jesuit motherhouse in Rome never expected to receive a phone call from Pope Francis.

The Holy Father had to patiently and kindly convince the doorman who he was in order to speak with the Father General of the Jesuits to thank him for a letter the Pontiff received upon his election.

According to Father Claudio Barriga, SJ, who recounted the incident in an email to fellow Jesuits around the world, the unexpected phone call from Pope came around 10:15 a.m. Rome time on Thursday.

“The doorman almost answered: ‘Yeah, and I’m Napoleon,’ but he resisted. Instead he replied curtly, ‘May I ask who’s calling?’ The Pope realized the young Italian man didn’t believe it was him, so he kindly repeated, ‘Seriously, it’s Pope Francis. What’s your name?’”

“Ever since the Pope’s election, our phone has been ringing every two minutes and a lot of people are calling, including a few lunatics,” Father Barriga said.

“Once the doorman realized his mistake he answered with a hesitant and nervous voice: ‘My name is Andrew.’”

“How are you, Andrew?” asked the Pope.

The Holy Father responded, “Don’t worry, could you please connect me with the Father General? I would like to thank him for the beautiful letter he sent me.”

“Pardon me, Your Holiness, I’ll connect you right now,” said the doorman.

The doorman handed the phone to the Father General’s private secretary, Brother Alfonso.

“With whom am I speaking?” the Pope asked.

“It’s the Pope, I would like to speak with the Father General to thank him for the beautiful letter he sent me,” the Holy Father said.

“Sure, just a moment,” Brother Alfonso replied in amazement.

As he made his way to the office of Father Adolfo Nicolas, the Jesuit Father General, he continued his conversation.

“Holy Father, congratulations on your election! We are all happy here for your election, we are praying a lot for you,” Brother Alfonso told him.

“Praying that I keep going or that I turn back?” the Pope joked.

“That you keep going, of course,” he replied, as the Holy Father laughed.

“Stunned and bewildered, Brother Alfonso didn’t even bother to knock and simply entered the office of the Father General, who looked at him with surprise. He gave him the phone, looked at him and said: The Pope,” Father Barriga recounted.

“We don’t know the details about what happened next, but the Pope cordially thanked the Father General for his letter. The Father General said he would like to see him to greet him. The Pope said he would instruct his secretary so that they could meet as soon as possible and that somebody from the Vatican would be in touch,” Father Barriga said in his message.

Good. It would be in his character to eliminate the kneeling down before him and kissing his ring, a ritual that has nothing to do with religion or God, but is from feudal times and is about the lord/vassal relationship.

Then he should dump the red shoes.

Thus demonstrating in life and conduct the nature of God to stoop down and speak to His creation with grace, mercy, and even some humor; not by phone, of course, but in the flesh.

The red shoes are symbolic; a reminder that he is willing to suffer martyrdom for the Church. I notice, though, that our new pope has chosen to remain in his street shoes.

LOL! Oh I like the red shoes; thought they were cute. Heck, he was the Pope, he could wear anything he wanted.

This Pope, though, from what my b-i-l tells me was wearing some old black clodhopper shoes during his first Mass. Pope Francis is used to living in the backwater, where he was banished by the Jesuits for trying to reform them in Argentina, before being made Bishop by JPII. ;o) And even after being made Bishop, then Cardinal, he still continued to live among the poor.

Pope Francis is very much for social justice, but NOT in the Karl Marx mode, like his brother Jesuits in Latin America. He's very much in the JESUS mode of social justice; not government handouts, but personal charity, and help in helping oneself.

What are your thoughts on abortionists (Biden/Pelosi) being sent by the U.S. to the Pope's inauguration?

I'm not Catholic but I do not like this one little bit.

Thank you for the question. I appreciate your concern. First, however, some clarifications. Neither VP Joe Biden nor Nancy Pelosi is an abortionist. By their support for abortion, they are complicit. Also, the pope is installed, not inaugurated. That said, it is common practice for Heads of State, regardless of their religious affiliation, to be invited to an important papal event such as a funeral or installation. When Pope John Paul II passed away, both President Bush, his father and former President Clinton attended.

More than 200 heads of state and government delegates -- some bitter adversaries -- came together to pay their last respects. U.S. President George W. Bush was just yards away from President Mohammed Khatami of Iran, a country he has labeled part of an "axis of evil." Representatives of troubled neighbors -- India and Pakistan as well as Israel and the Palestinian National Authority -- were seated in the same section reserved for heads of state in St. Peter's Square. Israeli President Moshe Katsav and Palestinian Prime Minister Ahmed Qureia were among the political leaders there who had met with the pope and, at times, had been praised and reproved by him. A senior Vatican official told reporters that "the funeral gave these leaders a sense of freedom. They were not afraid that people would read their actions politically." "I saw Israelis, Muslims who greeted each other with gestures of affection,"he said. 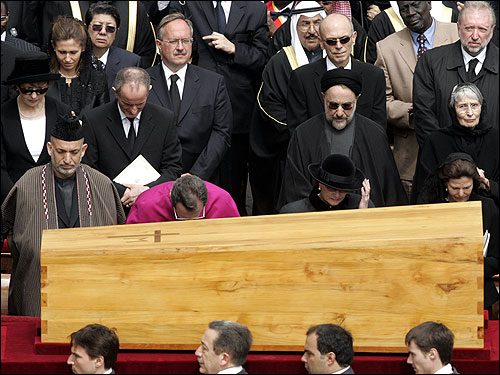 Iranian President Mohammad Khatami (second row, second from right) and Afghan President Hamid Karzai (front row, left) look on with other heads of state and government and political representatives as the coffin of Pope John Paul II was carried away.

Government officials who attend these events are keenly aware of the Catholic Church's position on moral issues and it can be quite uncomfortable to be at such an event. Take for example, the funeral of NY Cardinal John O'Connor in 2000. O'Connor was a bold preacher on the sanctity of human life. The funeral, broadcast live nationwide, was attended by then president Clinton and vice president Gore, their wives and numerous dignitaries including NYC Mayor Giuliani. At one point in the sermon, O'Connor's hand picked homilist said, "What a great legacy he has left us in his constant reminder that the Church must always be unambiguously pro- life."

There was a beat and then applause broke out. It grew louder, increasing as the cameras fixed on the Clinton-Gore party showing them on screens throughout the cathedral. Cardinal Law attempted to quiet the crowd with his hand, when suddenly the congregation began to stand up, applauding in a wave that moved from the back of the church to the front. If it hadn't been a funeral they would have cheered. It was a defiant, pivotal moment. Then the bishops and cardinals in the sanctuary stood up. The elder George Bush stood up applauding, as did his son somewhere off camera. The camera panned back to the Clinton- Gore party who looked bemused and bewildered. Having no water glasses to reach for as they did in 1994 when Mother Teresa received a thunderous ovation for telling the National Prayer Breakfast in Washington that there could be no peace as long as a mother could kill the child in her womb, Clinton leaned back and started whispering in Hillary's ear. Gore's face was as blank, flat and white as a sheet of paper. Behind them another abortion "rights" supporter, Rudy Giuliani, began to applaud, albeit weakly, and stood. And lest they be the only ones left seated, the Clintons and Gores lamely stood up but refrained from applauding.

I'm not Catholic but I do not like this one little bit.

Dear friend, their attendance at this installation will not alter the policy of the Catholic Church vis a vis the political views of any government. With so many political dignitaries in attendance, they are the ones on the hot seat. Here is a link to an article posted yesterday that will give you some insight into how the new pontiff addressed moral issues in the past.

We, as christians, must pray for these political figures and ask God to open their hearts to the truth. Trust in God! You never know how those hearts may be converted, especially at the end of life. God bless you for your witness!

How about a Pope with steel-toed boots? :)

Thank you for the detailed reply NYer.

12 posted on 03/17/2013 10:41:55 AM PDT by houeto (https://secure.freerepublic.com/donate/)
[ Post Reply | Private Reply | To 10 | View Replies]
To: NYer
Jesuit doorman surprised by Pope's phone call
Pope Francis on mass media and name
Eastern Orthodox Patriarch of Constantinople to Attend Papal Installation Mass
Pope Francis in Motion
Who is Pope Francis? A compilation from many news reports.
"Anyone who does not pray to the Lord prays to the devil." Homily of the Holy Father Pope Francis
Joe Biden and Nancy Pelosi will represent the United States at Pope Francis’ Inaugural Mass
Beijing Cautions New Pope on Meddling in China,/a>
For the First Time Since the Great Schism, Ecumenical Patriarch to Attend Pope's Inaugural Mass
Ann Barnhardt on Pope Francis
New Pope snubs Cardinal Law
Pope Francis seen as humble man who can unite, rebuild Church