As we approach the patronal feast day of the United States, it's the perfect time to mention a beautiful devotion to Our Lady of the Immaculate Conception.

The Corona of the Immaculate Conception is a chaplet composed by a Jesuit priest who was one of North America's great explorers: Father Jacques Marquette. 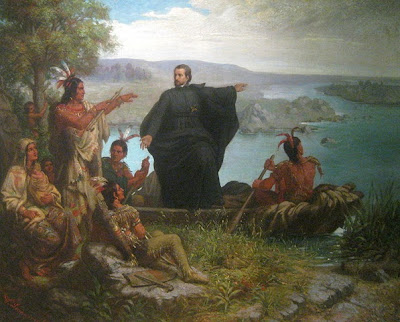 Unfortunately, the Corona is not very well known. There's another, better known devotion called the "Chaplet of the Immaculate Conception" written by St. John Berchmanns. But in terms of authorship and historical context, Marquette's Corona has a special significance for Americans and Canadians.

Let's set the stage with an account of the Corona from Marquette's Jesuit superior Fr. Claude Dablon, writing from Montreal in 1677:

"Some months before his death, he said every day with his two men a little Corona of the Immaculate Conception which he had devised as follows: After the Credo, there is said once the Pater and Ave, and then 4 times these words: Ave filia Dei patris, ave mater filii Dei, ave sponsa Spiritus Sancti, ave templum totius Trinitatis: per sanctam virginitatem et immaculatam conceptionem tuam, purissima Virgo, emunda cor et carnem meam: in nomine Patris, et Filii, et Spiritus Sancti, — concluding with the Gloria Patri, the whole repeated three times."

For a long time I never found an actual Corona of the Immaculate Conception for sale anywhere. So I went ahead and made my own with cord/twine, 15 blue oval beads, and a miraculous medal: 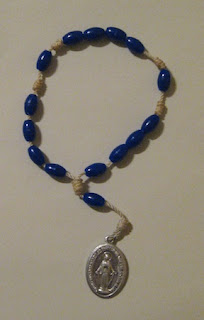 But you can also use St. John Berchman's Chaplet of the Immaculate Conception

, which has the same arrangement of beads. 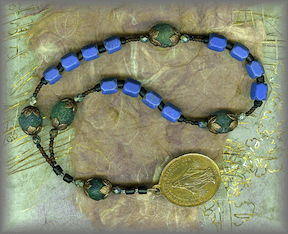 Their arrangement is slightly different than the one I made, but of course there is a good deal of room for individual preference on these devotions. Here's how I say it.

How to Say the Corona of the Immaculate Conception

If you'd prefer to say the chaplet in Latin, the text of the Corona prayer can be found italicized in the passage from Fr. Dablon above.

TOPICS: Catholic; General Discusssion; History; Prayer
KEYWORDS: corona; devotion; immaculate; marquette
Here's a newly revised article I did a while back about an old devotion of the explorer Father Jacques Marquette. Given its North American roots, I think it's a great way to honor Our Lady's feast day coming up on December 8th.
1 posted on 12/05/2011 3:43:54 AM PST by Claud
[ Post Reply | Private Reply | View Replies]
To: Claud

I never heard of it. Thanks for sharing.

would pronounce his name Jack-quez

Thanks for the post, claud. I printed the text and made a sketch of the chaplet, and I can easily string a few beads for it.

My pleasure! I read about the Corona doing some historical research a few years back and was really taken by it.

Just so you all know, there’s some question about the set of prayers. The translation of the passage is somewhat ambiguous: “the whole repeated three times”...does that mean said 3 times in total, or said once and then *repeated* 3 times (4 total)? I am going to check the French, see if that clears things up.

I’ve been corresponding with the folks at the Rosary Workshop, and we both agree that 3 times total is probably correct, which is the same as the Berchmanns chaplet and which harmonizes nicely with the strong Trinitarian content.