In his book about Mary: Hail, Holy Queen, Dr. Scott Hahn tells how, as a young man, Jesus drew him away from delinquency. Because of his newfound faith, when his Grandma Hahn died, they gave Scott a box of her religious articles. In it was a rosary. At that time he knew Jesus, but considered any devotion to Mary would detract from what is owed to God alone. To him the rosary was like a chain, so he took it in his hand and broke it into pieces.

Scott eventually became a Protestant minister. During his seminary years and as a young pastor, he studied the Bible and the teachings of early Christians. Little by little he began to realize the singular role of Mary – not only as mother of Jesus, but her unique holiness. He discovered a long tradition regarding her as intercessor, spotless virgin, and queen, bodily taken into heaven.

Dr. Hahn concludes his book with an appendix on praying the rosary:

”Once I looked down with disgust upon a string of rosary beads. I saw it as a noose that choked off true devotion in countless Roman Catholics. When I held Grandma Hahn’s rosary, I couldn’t break that loop quickly or forcefully enough. Now, while I look down at my own bead, I see the same circle, but it is different. It suggests a queen’s crown, a mother’s encircling arms.”

What a beautiful collection!

but I bent that to the point where it wouldn't turn any more. So I got 250 of these and carry a small selection and give them to people (not just Catholics) that I think might appreciate or or use them (including one of my Reformed friends who initially held it like it was a decaying marsupial, but who then pinned it up over his desk in a prominent position)

And I only have four rosaries! LOL! 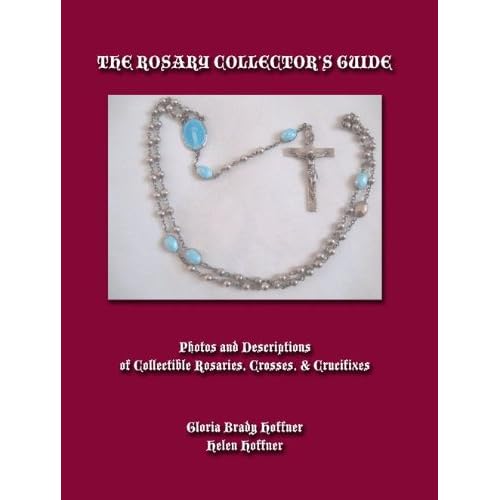 My husband's mother was raised Catholic, but converted to the Methodists when she married my father in law (a preacher's kid). Now my husband has converted back, so we're even. :-D

When her sister passed away recently, they sold the house in New Jersey and of course had to clear 80 years worth of stuff out. My mother in law got a big paper bag and gathered all the religious medals, rosaries, prayer books, holy cards, etc. that had accumulated in all that time and just handed them over . . . . amazing stuff. Many of the rosaries are broken, but I've been able to mend some and am working on others.

Some real curiosities -- chaplets of the Seven Sorrows of Mary, many third-class relics, medals of saints you never even heard of . . . I've been slowly working through them. Gave the St. Gerard Majella medals to a friend's daughter who was having a difficult pregnancy. Pleased to report she went to full term and had a beautiful daughter after a short and uneventful labor!

What an awesome collection! I’m sure she must have some really lovely ones.