Shakespeare Did Write Lear; What is More, He Was a Catholic
The Catholic Herald ^ | 1/7/11 | Francis Phillips

Sir Derek Jacobi is wrong to think that Shakespeare could not have written his own plays; the greatest poet and dramatist of all times was an Englishman and a Catholic

The actor Sir Derek Jacobi is currently acting the part of King Lear to great critical acclaim at the Donmar Warehouse. I must get to see it before the production closes just to see if he gets my personal imprimatur or not. But there is one matter on which I cannot agree with Sir Derek: the authorship of Shakespeare’s plays. Apparently the knighted thespian takes a benighted view on this one: that a semi-educated country boy from Stratford couldn’t possibly have written the works of genius attributed to him.

Indeed, Jacobi has publicly declared, “The only evidence of Shakespeare’s literary life was produced after he died and is open to dispute. Nothing, apart from some shaky signatures, puts a pen in his hand. Legend, hearsay and myth have created this writer.”

This is bilge and balderdash, stuff and nonsense. But rather than rehearse his arguments at second-hand, may I direct readers of this blog to an excellent book, Contested Will: Who wrote Shakespeare? by James Shapiro, a professor at Columbia University. Shapiro demolishes all the far-fetched and tendentious theories advocated by Jacobi and others – Sigmund Freud and Mark Twain among them – who are too intellectually contorted to see the obvious: that if you are a genius you don’t have to experience at first-hand everything you write about; you use your imagination. After all, Shakespeare did not have to commit murder to be able to write Macbeth; nor did he have to go mad in order to write King Lear.

I understand that Jacobi was a grammar school boy. Presumably it delivered him a decent education. Why should Shakespeare be thought of as a country bumpkin when it is known that he enjoyed the rigours of an Elizabethan grammar school education in Stratford? Obviously, as a youth of preternatural poetic sensibility, he did not over-exert himself with the heavily classical syllabus; ‘little Latin and less Greek’, according to his friend Ben Jonson. Luckily there was no TV in those days, so that instead of slumping on the sofa, young William got much of his wisdom from the university of life.

Well, as I am sure readers will agree with me, I hardly need to preach to the converted. Just one other thing: the greatest poet and dramatist of all time (you can keep your Racine and your Goethe) was an Englishman – and a Catholic. I will readily admit that the evidence for this is disputed (unlike the authorship of the plays for 200 years after his death.) Shapiro does not go into this; he is simply concerned that prove that Shakespeare wrote the plays. But there is still enough contributory knowledge of his childhood influences, his family milieu and his acting circle to make his religious beliefs more than a conjecture. His parents were devout Catholics; so were his school masters; so were many of his friends, his acting troupe and his patrons. (Fr Peter Milward SJ has written about Catholic aspects in the plays themselves.)

Shapiro surmises that one of the reasons there is so little biographical documentation about Shakespeare during his life is that, as the follower of an outlawed faith (he did not want to be hanged, drawn and quartered after all, and who can blame him) he destroyed the evidence. Peter Ackroyd’s biography discusses this question in greater depth, as does Clare Asquith’s Shadowplay, which suggests that the plays are crammed with coded allusions for Shakespeare’s co-religionists.

At any rate, the dramatist is not the atheist that modern (atheist) scholars would have him be, Jonathan Bate and director Richard Eyre among them. Just because they inhabit a bleak, post-modern, Darwinian universe there is no reason to drag Shakespeare along with them. Yes – he could pretend to be a pagan and a cynic, as in the Roman plays, and convey every other position as he chose. But that is the power of his imaginative capacity. To throw out a final intriguing thought for sceptical Sir Derek: is Shakespeare really buried in Stratford parish church?

I have read a most plausible argument by the late Hugh Ross Williamson that suggests the enigmatic words on his tomb – “Good friend for Jesus’ sake forbear/to dig the dust enclosed here/blest be the man that spares these stones/ and curst be he that moves these bones” – were deliberately composed to stop people opening up the coffin. Why? Because as a loyal though secret Catholic, Shakespeare wanted the Church’s last rites and a Catholic burial – and not to lie in a Protestant church. 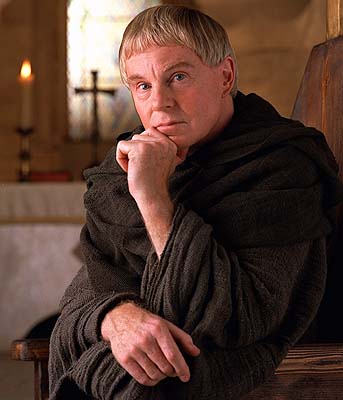 Or Claudius. A great actor.

Well...yes, but not "know" in the Biblical sense, of course.

Personally, I think some of Shakespeare's plays were group efforts.

Jacobi was exceptional as Cadfael, but I most liked him as “Chorus” in Kenneth Brannagh’s “Henry V”.

Shakespeare was attacked, critically in his lifetime for several of his plays, which gives him considerable cache IMHO.

And, yes, there is very substantial evidence, both from his life and his plays, that he was a Catholic. He seems to have liked living on the edge.

Stephen Greenblatt, Will In The World: How Shakespeare Became Shakespeare.

He sure quotes from the Geneva Bible a lot.

While I mentioned that, ´He seems to have liked living on the edge´, he does not appear to have been suicidal.

I remember him from I Claudius as well.

Sure hope his Lear is better than the version he offered on Frasier (”BLOW WIND AND CRACK YOUR CHEEKS!!!!”).

12 posted on 01/07/2011 8:31:23 AM PST by Elwood P. Doud (America, you voted for a negro socialist with an Islamic name - so why act surprised?)
[ Post Reply | Private Reply | To 1 | View Replies]
To: onedoug
Ordinary folks always find it incredible that true genius comes in all packages. Newton, possibly the most brilliant person to ever live, was of very humble origin.

Shakespeare was a genius, and could, therefore, have written all attributed to him with the greatest of ease.

Personally, I think some of Shakespeare’s plays were group efforts.
You may be right some say he stold a lot of other peoples works.

“Personally, I think some of Shakespeare’s plays were group efforts.”

Quite possible. But the primary author was very likely Edward de Vere, 17th Earl of Oxford.

For some reason Professors of English tend to cling tenaciously to the idea that William Shagsper, the Stratford grain merchant and actor was the author of the plays. I can believe that a man could rise from humble origins to write great literature, but not that such a man could leave illiterate children behind him.

Shakespeare was definitely not an atheist. Else how could he possibly write:
“To die: to sleep;
No more; and by a sleep to say we end
The heart-ache and the thousand natural shocks
That flesh is heir to, ‘tis a consummation
Devoutly to be wish’d. To die, to sleep;
To sleep: perchance to dream: ay, there’s the rub;
For in that sleep of death what dreams may come
When we have shuffled off this mortal coil,
Must give us pause: there’s the respect
That makes calamity of so long life;
For who would bear the whips and scorns of time,
The oppressor’s wrong, the proud man’s contumely,
The pangs of despised love, the law’s delay,
The insolence of office and the spurns
That patient merit of the unworthy takes,
When he himself might his quietus make
With a bare bodkin? who would fardels bear,
To grunt and sweat under a weary life,
But that the dread of something after death,
The undiscover’d country from whose bourn
No traveller returns, puzzles the will
And makes us rather bear those ills we have
Than fly to others that we know not of?”

De Vere had Catholic sympathies, but was above all loyal to his cousin the Protestant Queen.

16 posted on 01/07/2011 9:41:59 AM PST by devere
[ Post Reply | Private Reply | To 4 | View Replies]
To: marshmallow
I have always admired Jacobi as an actor. He should have been knighted for I, Claudius alone. On the BBC Shakespeare Plays series, he turned in great performances as Richard II and Hamlet (though now, when I re-watch Hamlet he does seem a tad to effeminate at times). He was also brilliant as Hitler in the TV miniseries Inside The Third Reich.

However, Jacobi doesn't understand diddly about history. He is unable to see that artistry is not dependent upon education. He is yet another actor who has played intelligent characters and therefore thinks himself intelligent but he is really an empty vessel himself when it comes to great thinking. I'd love to see his Lear.

Thank you so very much for posting that, whoever the true author was.

Your screen name is making me smile. Shakespeare also slipped his name into the King James version of the Bible. Although it was published after his a few years after his De Vere’s death, it is not unreasonable to think he was asked to work on that project. Look at Pslam 46. The first word is Shake, count 46 words, and the word is spear. Maybe a coincidence.

I do believe in the 17th Earl of Oxford theory. This man had the education, military experience, travel experience, and the extensive inner court knowledge, that no commoner at the time could have been exposed to. I believe the speech that Polonius gave to Hamlet, was similar to the speech his father in law (William Cecil).