I probably should not have chosen the screen name of Sans-Culotte, because most think it merely means "without pants" Actually, it is French for "without knee breeches", and refers to the most revolutionary part of the Paris Mob during the French Revolution. The "Sans-Culottes" eschewed the tight-fitting knee-breeches of the aristocracy and opted for loose (usually striped with the French tri-colors) trousers. They are generally depicted with a "phrygian" cap (sort of like a loose stocking cap) on their heads with a tricolor cockade on it. Some even had the words "Mort au Tyrans" tattooed on their chests. If youve ever seen the classic MGM Ronald Colman film of "A Tale of Two Cities" (or any version for that matter), the Sans-Culottes are the radicals which includes the DeFarges who are clamoring "off with their heads". 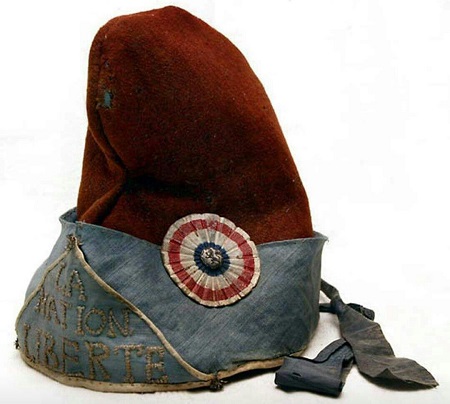 I chose the name during the reign of the tyrannical Clintons because I thought it had a revolutionary firebrand sound to it. I didnt think about the fact that not everyone reads as much about the era of the French Revolution and the Age of Napoleon as I do, so I suppose people must think I am some sort of nudist who goes about without pants!

For more info on the Sans-Culottes, go HERE.

States I have visited: