101 posted on 04/09/2008 8:35:51 AM PDT by B Knotts (Calvin Coolidge Republican)
[ Post Reply | Private Reply | To 85 | View Replies]
To: DieHard the Hunter; Beloved Levinite; Gamecock; ROLF of the HILL COUNTRY; marshmallow
You must remember this
A kiss is just a kiss
A sigh is just a sigh.
The fundamental things apply
As time goes by.

The Sharif Bible, a translation of the Bible in modern Arabic. As our valuable Aussie Protestant mate, DieHard the Hunter, has righly pointed out, and as everybody actually knows, the Catholic Church has never been so foolish as to propose that the Pope is intellectually or morally faultless, flawless, or foolproof, let alone impeccable, personally ---- but only that he will never be able to bind the Catholic Church to falsity in matters of faith and morals.

That means the Pope could be stupid or sinful (some of them, esp. during the Renaissance, were notoriously so) but cannot make an erroneous doctrine binding on the whole church. Thus "infallibility" is more a divine protection for the Church than a personal quality of the Pope, since it constitutes a divine promise that no matter how screwed-up a Bishop of Rome may be, he will not be able to make a dogma out of it to mislead the whole Church. (Keywords "gates" "hell.")

So whatever it was that John Paul was doing in the famous 9-year-old picture that has been around the world 10,000 times on the Internet, it was at worst an act of cringe-making personal error and not an erroneous definition of dogma.

I would want to add that Pope John Paul was Polish after all, and therefore a kisser.

Any time anybody gave him anything, he kissed it as a sign of thanks. He kissed sombreros. CD's. Guitars. Sweatshirts. Soccer balls. Sandwiches. Photographs. Baseball caps. Pineapples. Personal correspondance (letters). Cheeks. Foreheads. Hands. Walls (in Jerusalem.)

He's famous for even getting on his knees and kissing the ground for godsake, and literally for God's sake because he was the kind of guy who easily and spontaneously expressed gratitude for gifts all the time.

It's pretty clear he was kissing the book "as gift" ("as soccer ball") and not as a liturgical gesture canonizing Islamic scripture.

I might render a different opinion if it had been Rowan Williams, GOL (for Groaning Out Loud), but, not unfairly, I'm going to give our Lolek the benefit of the doubt because this is the same guy who commissioned Cardinal Josef ("the Enforcer") Ratzinger to write "Dominus Iesus," which clarified that nobody is saved by anybody except by Jesus Christ Our Lord.

And if it turns out, as wideawake says, that it was an Arabic-language edition of the Bible--

And DieHard, you are certainly a valuable man to have around!

Assuming you're a Christian, you're seriously mistaken. In fact, Christians believe that the human authors of scripture were inspired, which is a higher gift than infallibility. (Inspiration is the ability to say exactly what God wants said; infallibility the merely negative protection against saying what God does not want said.)

As for John Paul II’s kissing of the Koran, it was poor judgment. Since he made an error, he couldn’t be infallible.

Infallibility only protects teaching (and only protects that when it meets certain specific conditions), not "judgement" or "setting a bad example". See Die Hard the Hunter's post for details.

> And DieHard, you are certainly a valuable man to have around!

Some will read and learn, and that is all we can ask.

>>Some will read and learn<<

Some will ignore and live to play “Wack-A-Catholic” another day!

In Catholic teaching, the archangels are Michael (Revelation 12), Gabriel (Daniel 8, Luke 1), and Raphael (Tobit 12). I don't want any discussions over whether the Book of Tobit is OK, please note that I said "Catholic teaching."

I also read with interest that according to Judaic tradition, Gabriel is the angel who wrestled Jacob, as well as commanding Abraham, Noah, and Moses.

In Eastern Orthodox tradition, the other angels are named to round out the "the seven, who stand before the Lord" (Tobit 12:15). The other four named are Uriel, Selaphiel, Jegudiel, and Barachiel. Pope Gregory I listed the other four as Uriel, Simiel, Orifiel, and Zachariel. Another list has them as Uriel, Sealtiel, Jhudiel and Barachiel. Since the other four aren't named in Scripture, who knows. My knowledge of them as far as names are concerned is limited to the three mentioned in the Bible.

In Islam, the oral traditions, known as Hadith, mention an angel Israfil (apparently Raphael in Arabic) as the Angel responsible for signalling the coming of Judgment Day by blowing the horn and sending out a "Blast of Truth". Catholics usually assign this duty to Gabriel.

The point is, however, that if a Muslim man were named after the angel, wouldn't he be named Israfil? Add to this the fact that this Raphael is "Patriarch," a title used usually in the Eastern Orthodox and Eastern Catholic Rites, and I have to wonder.

Research of a list of patriarchs from 2002 turns up the name of Raphael I Bidawid, who is listed as Patriarch of the Chaldean Catholic Church, which is based in Iraq, and furthermore, in full communion with Rome. You may recall that the Chaldean Archbishop of Mosul was recently kidnapped and killed by Muslim terrorists. 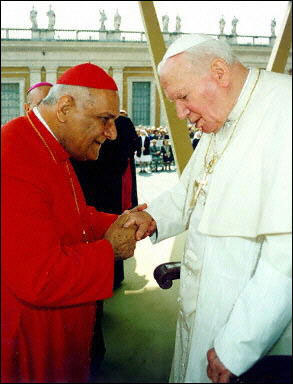 Raphael I Bidawid died on July 7, 2003, and was replaced as Chaldean Patriarch by Cardinal Emmanuel III Delly in December of 2003. Yes, Cardinal Delly. Benedict XVI gave him a red hat. The next time they meet to elect the Pope, he has a vote. They could elect him Pope if that is God's will.

All anyone has to do is a little bit of searching.

Which brings us to the picture. The guy in the picture with the Pope does NOT look like Patriarch Raphael I of the Chaldeans. And the book he is kissing does look like the Sharif Arabic Bible. I almost wonder if there is another version of this picture which shows Raphael I in his red outfit on the other side of the Pope, and he was cropped out. Even then, though, that would mean that this picture was taken in Rome.

Which is another thing to consider -- where is this picture taken? The Pope wanted to visit Iraq as a pilgrimage to follow in the steps of Abraham, but was denied permission. Every time Patriarch Raphael I met him, it was the Patriarch who went to Rome. The Pope went many places, but did not go to Iraq.

So there are some opportunities for JPII to visit places where he would encounter men like Mr. Joe Shiek, witness to the Pope's kissing. Joe Shiek could be from anywhere, although he is most likely from a country with an Islamic presence, and there are a few of those on the above list.

I almost wonder if the picture and the caption aren't related. That this Patriarch Raphael I of the Chaldeans has nothing to do with the picture. Therefore, the motivation of the people coming up with the picture and caption can be considered dubious, but even then, what of the picture? Where was it taken? Who is pictured with him? What is he kissing?

This picture leads to more questions than answers.

And assuming it was the Koran, I think it helpful to understand the context of this incident. It is from a news story that quotes the Patriarch of the Chaldean Church that we learn that it was the Koran. I think it interesting that the purpose of the delegation that went to Rome was to communicate the devastating effects the embargo on Iraq was having on the Iraqi people and reinvite the pope to come to Iraq.

I can imagine the pope feeling quite saddened by the tales of suffering that the people were enduring. And I think the pope probably felt a great regret that he couldn't go to Iraq. The opportunity to emphasize the commonalities of religions that were both rooted in Abraham, could have been a PR bonanza. As would have been the tacit approval of the religious toleration that people of faith enjoyed in that Muslim nation. Bringing attention to that fact would have been enormously beneficial.

I think the kiss was given as a spontaneous substitute to the ground the pope knew he would never kiss. It was a saddened, helpless, regretful pope, and a useless kiss was the most he could offer to the long suffering Iraqi people.

“... On May 14th I was received by the Pope, together with a delegation composed of the Shiite imam of Khadum mosque and the Sunni President of the council of administration of the Iraqi Islamic Bank. There was also a representative of the Iraqi ministry of religion.....At the end of the audience the Pope bowed to the Muslim holy book the Koran presented to him by the delegation and he kissed it as a sign of respect.” - Raphael I Bidawid, Patriarch of Babylon of the Chaldeans in an interview with the FIDES News Service

So Raphael I is not the man in the picture, but it is from his interview with a news service that we learn the story behind the picture. Note that the above quote wasn’t used by the original poster.

I will give Islam credit for one thing, though, they have more respect for Mary than the Protestants do. Which is amazing, considering all the prejudice against women in places like Saudi Arabia and Afghanistan under the Taliban.

112 posted on 04/09/2008 11:50:14 AM PDT by sitetest (If Roe is not overturned, no unborn child will ever be protected in law.)
[ Post Reply | Private Reply | To 102 | View Replies]
To: LordBridey
A good insight. Both Crl. Ratzinger and JP2 were strenuously opposed to the U.S. armed incursion into Iraq, after a desperate plea by all six Middle Eastern patriarchs (let's see: Coptic, Armenian, Melkite, Maronite, Chaldean and Assyrian?) that their communities, some of the most ancient Christian communities in the world, would therefter be targetted and most probably destroyed.

Which does seem to be the way it's tending. A painful thing to look at, but there it is.

No, of course I’m not saying the Pope was Muslim, nor insinuating it! I was concerned that he was showing respect for the Koran, as it is blatently anti-christian. Some Catholics here agree that it was probably a bad error in judgement on his...and let’s leave it there.

re: moving on - fine, but this thread has over 1,200+ views, so there is still interest & it has taken on a life of it’s own. But this will be my last post on the subject.

No, that was my original username & I changed it cause Freeps on the Levin thread thought I was be a female (Freeda) & I got tired of correcting people & I posted about the change, so I never tried to hide it. So, I hope I’ve satisfied your “Gotcha” moment.

“Just because an Arab handed him a book doesn’t mean the Arab is a Muslim or that the book is a Koran.
In fact, the Arab pictured is a Christian by the name of Raphael - and you might want to try looking up a picture of the Sharif translation of the Bible into Arabic.

I have one - and people instinctively assume it is a Koran because it is green and has Arabic script on the cover. “

-thanks for this. i got fooled by the picture.