According to the Telegraph, Rowan Williams may just have guaranteed an Anglican split:

The archbishop of Canterbury has told homosexuals that they need to change their behaviour if they are to be welcomed into the church, The Sunday Telegraph can reveal.

Rowan Williams has distanced himself from his one-time liberal support of gay relationships and stressed that the tradition and teaching of the Church has in no way been altered by the Anglican Communion’s consecration of its first openly homosexual bishop.

The declaration by the archbishop - rebutting the idea that homosexuals should be included in the church unconditionally - marks a significant development in the church’s crisis over homosexuals. According to liberal and homosexual campaigners, it confirmed their fears that the archbishop has become increasingly conservative - and sparked accusations that he has performed an "astonishing" U-turn over the homosexual issue.

The revelations came in a newspaper interview last week in which the archbishop denied that it was time for the church to accept homosexual relationships, suggesting that it should be welcoming rather than inclusive. "I don’t believe inclusion is a value in itself. Welcome is. We don’t say ’Come in and we ask no questions’. I do believe conversion means conversion of habits, behaviours, ideas, emotions," he told a Dutch journalist.

At the same time he tried to distance himself from a controversial essay he wrote 20 years ago, in which he defended same-sex love. "That was when I was a professor, to stimulate debate," he claimed. "It did not generate much support and a lot of criticism - quite fairly on a number of points."

The archbishop said that he was determined to preserve the unity of the church from being destroyed by the warring factions in the gay crisis. He said he has backed a resolution which says that homosexual practice is incompatible with the Bible.

Big Narcissism was, of course, outraged.

The Rev Giles Goddard, the chairman of Inclusive Church, a liberal group, said the archbishop’s comments revealed an "astonishing" change in his position. He added: "The implication is that there is no justification in scripture for the welcome of lesbian and gay people. It appears that he has moved into the conservative camp."

Chris Bryant, a homosexual Labour MP, said that many people would feel betrayed by the archbishop’s comments. "The Church of England wouldn’t survive without gay clergy in inner cities.

"People will feel this is a huge betrayal. Rowan has refashioned the Church of England into a narrow-minded, conservative sect."

Liberals, meanwhile challenged the archbishop’s attempt to downplay his involvement in the homosexual movement, claiming that he had in fact played a significant role in spearheading moves to make the Anglican Church more tolerant.

In 1989, while professor of divinity at Oxford University, he founded the Institute for the Study of Christianity and Sexuality - a group that set out to combat bigotry towards homosexuals, this newspaper has learnt. At the time it was launched, he said: "The pressure that some church figures put upon people of differing sexual identities is a greater disgrace than anything else seen in the church."

I think that both the Telegraph and the C of E's liberals are going a bit overboard.  Rowan Williams may well personally hold views on human sexuality that most people would describe as liberal.  But he heads an international Christian organization that doesn't and declared as much in 1998.

And he thinks that this organization is a worthwhile and valuable thing and that his personal views ought to take second place to the mind of the Communion.  My gracious lord of Canterbury knows that if he were to openly declare that he sees nothing wrong with Gene Robinson getting a pointy hat, the Anglican Communion would shatter.  I think Dr. Williams would rather persuade than unilaterally impose without so much as a by-your-leave like the Americans did in 2003.

I have to admit that my estimation of Rowan Williams has changed rather dramatically lately.  I really think that he is a Christian rarity.  A man of great humility who is entirely willing to admit that he might be wrong.

Thanks to a number of people for alerting me to this. 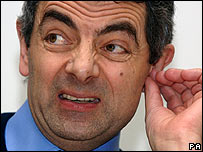 However, you really can't respect the man's attempt to justify his previous support of the gay agenda. Dissent is of value only when it is of value, and this wasn't. IMO. So call me a bigot. He had the right to say it, and I have the right to say he's full of beans.
7 posted on 08/28/2006 8:16:41 AM PDT by chesley (Republicans don't deserve to win, but America does not deserve the Dhimmicrats.)
[ Post Reply | Private Reply | To 1 | View Replies]
To: Professional Engineer

I actually met and spoke to an English Anglican scholar (won't identify him more) yesterday who knows the Archbishop personally. He writes him regularly from the states and lets him know what the real story is going on here. The ABC is a shy scholar, and had his office foisted upon him--he'd be much more comfortable writing those kind of long complex books few ever read--and apparently the way he's been trying to keep things together is by not saying much, according to the scholar. I asked this insider whether Williams is an evangelical, and no, he is not, however, he is fairly orthodox...which is very good news for us.

His earlier comments about gays are way overdrawn by the homosexual lobby in the church--as they were speculative, and apparently just saying that there might be something redeemable about the loving part of homosexual relationships. (and hey, isn't the friendship side of even relationship that involves perverted sex, acceptable? It's the sex which is twisted, not having a friend.) This is a very different thing than promoting homosexual relationships--and stimulating debate is the pervue of scholars. Perhaps evangelicals, like the man I met, have had a good influence on Williams, as it appears like they have--moving him away from dangerous waters.

We really need to sincerly pray for the Archbishop. Christ is leading His church!

We really need to sincerely pray for the Archbishop. Christ is leading His church!

You better get started on those Hail Marys, you're going to be kneeling there in the Lady chapel for awhile . . .

Let me see where I left that marble rosary...

My daughter has one with beads that look like multi-colored jawbreakers - weirdest rosary I ever saw. Naturally it came from an Episcopalian bookstore . . .