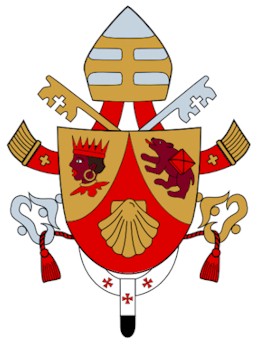 Lent is a privileged time of interior pilgrimage towards Him Who is the fount of mercy.  It is a pilgrimage in which He Himself accompanies us through the desert of our poverty, sustaining us on our way towards the intense joy of Easter.  Even in the “valley of darkness” of which the Psalmist speaks (Ps 23:4), while the tempter prompts us to despair or to place a vain hope in the work of our own hands, God is there to guard us and sustain us.  Yes, even today the Lord hears the cry of the multitudes longing for joy, peace, and love.  As in every age, they feel abandoned.  Yet, even in the desolation of misery, loneliness, violence and hunger that indiscriminately afflict children, adults, and the elderly, God does not allow darkness to prevail.  In fact, in the words of my beloved Predecessor, Pope John Paul II, there is a “divine limit imposed upon evil”, namely, mercy (Memory and Identity, pp. 19ff.).  It is with these thoughts in mind that I have chosen as my theme for this Message the Gospel text: “Jesus, at the sight of the crowds, was moved with pity” (Mt 9:36).

In this light, I would like to pause and reflect upon an issue much debated today: the question of development.  Even now, the compassionate “gaze” of Christ continues to fall upon individuals and peoples.  He watches them, knowing that the divine “plan” includes their call to salvation.  Jesus knows the perils that put this plan at risk, and He is moved with pity for the crowds.  He chooses to defend them from the wolves even at the cost of His own life.  The gaze of Jesus embraces individuals and multitudes, and he brings them all before the Father, offering Himself as a sacrifice of expiation.

Enlightened by this Paschal truth, the Church knows that if we are to promote development in its fulness, our own “gaze” upon mankind has to be measured against that of Christ.  In fact, it is quite impossible to separate the response to people’s material and social needs from the fulfilment of the profound desires of their hearts.  This has to be emphasized all the more in today’s rapidly changing world, in which our responsibility towards the poor emerges with ever greater clarity and urgency.  My venerable Predecessor, Pope Paul VI, accurately described the scandal of underdevelopment as an outrage against humanity.  In this sense, in the Encyclical Populorum Progressio, he denounced “the lack of material necessities for those who are without the minimum essential for life, the moral deficiencies of those who are mutilated by selfishness” and “oppressive social structures, whether due to the abuses of ownership or to the abuses of power, to the exploitation of workers or to unjust transactions” (ibid., 21).  As the antidote to such evil, Paul VI suggested not only “increased esteem for the dignity of others, the turning towards the spirit of poverty, cooperation for the common good, the will and desire for peace”, but also “the acknowledgement by man of supreme values, and of God, their source and their finality” (ibid.).  In this vein, the Pope went on to propose that, finally and above all, there is “faith, a gift of God accepted by the good will of man, and unity in the charity of Christ” (ibid.).  Thus, the “gaze” of Christ upon the crowd impels us to affirm the true content of this “complete humanism” that, according to Paul VI, consists in the “fully-rounded development of the whole man and of all men” (ibid., 42).  For this reason, the primary contribution that the Church offers to the development of mankind and peoples does not consist merely in material means or technical solutions.  Rather, it involves the proclamation of the truth of Christ, Who educates consciences and teaches the authentic dignity of the person and of work;  it means the promotion of a culture that truly responds to all the questions of humanity.

In the face of the terrible challenge of poverty afflicting so much of the world’s population, indifference and self-centered isolation stand in stark contrast to the “gaze” of Christ.  Fasting and almsgiving, which, together with prayer, the Church proposes in a special way during the Lenten Season, are suitable means for us to become conformed to this “gaze”.  The examples of the saints and the long history of the Church’s missionary activity provide invaluable indications of the most effective ways to support development.  Even in this era of global interdependence, it is clear that no economic, social, or political project can replace that gift of self to another through which charity is expressed.  Those who act according to the logic of the Gospel live the faith as friendship with God Incarnate and, like Him, bear the burden of the material and spiritual needs of their neighbours.  They see it as an inexhaustible mystery, worthy of infinite care and attention.  They know that he who does not give God gives too little; as Blessed Teresa of Calcutta frequently observed, the worst poverty is not to know Christ.  Therefore, we must help others to find God in the merciful face of Christ.  Without this perspective, civilization lacks a solid foundation.

Thanks to men and women obedient to the Holy Spirit, many forms of charitable work intended to promote development have arisen in the Church: hospitals, universities, professional formation schools, and small businesses.  Such initiatives demonstrate the genuine humanitarian concern of those moved by the Gospel message, far in advance of other forms of social welfare.  These charitable activities point out the way to achieve a globalization that is focused upon the true good of mankind and, hence, the path towards authentic peace.  Moved like Jesus with compassion for the crowds, the Church today considers it her duty to ask political leaders and those with economic and financial power to promote development based on respect for the dignity of every man and woman.  An important litmus test for the success of their efforts is religious liberty, understood not simply as the freedom to proclaim and celebrate Christ, but also the opportunity to contribute to the building of a world enlivened by charity.  These efforts have to include a recognition of the central role of authentic religious values in responding to man’s deepest concerns, and in supplying the ethical motivation for his personal and social responsibilities.  These are the criteria by which Christians should assess the political programmes of their leaders.

We cannot ignore the fact that many mistakes have been made in the course of history by those who claimed to be disciples of Jesus.  Very often, when having to address grave problems, they have thought that they should first improve this world and only afterwards turn their minds to the next.  The temptation was to believe that, in the face of urgent needs, the first imperative was to change external structures.  The consequence, for some, was that Christianity became a kind of moralism, ‘believing’ was replaced with ‘doing’.  Rightly, therefore, my Predecessor, Pope John Paul II, of blessed memory, observed: “The temptation today is to reduce Christianity to merely human wisdom, a pseudo-science of well-being.  In our heavily secularized world, a ‘gradual secularization of salvation’ has taken place, so that people strive for the good of man, but man who is truncated…We know, however, that Jesus came to bring integral salvation” (Redemptoris Missio, 11).

It is this integral salvation that Lent puts before us, pointing towards the victory of Christ over every evil that oppresses us.  In turning to the Divine Master, in being converted to Him, in experiencing His mercy through the Sacrament of Reconciliation, we will discover a “gaze” that searches us profoundly and gives new life to the crowds and to each one of us.  It restores trust to those who do not succumb to scepticism, opening up before them the perspective of eternal beatitude.  Throughout history, even when hate seems to prevail, the luminous testimony of His love is never lacking.  To Mary, “the living fount of hope” (Dante Alighieri, Paradiso, XXXIII, 12), we entrust our Lenten journey, so that she may lead us to her Son.  I commend to her in particular the multitudes who suffer poverty and cry out for help, support, and understanding.  With these sentiments, I cordially impart to all of you a special Apostolic Blessing.

2 posted on 01/31/2006 9:53:09 AM PST by NYer (Discover the beauty of the Eastern Catholic Churches - freepmail me for more information.)
[ Post Reply | Private Reply | To 1 | View Replies]
To: american colleen; Lady In Blue; Salvation; narses; SMEDLEYBUTLER; redhead; Notwithstanding; ...

Darn. I'm still waiting for the use of the greeting "Whassup, Peeps?"

Very often, when having to address grave problems, they [certain Christians] have thought that they should first improve this world and only afterwards turn their minds to the next. The temptation was to believe that, in the face of urgent needs, the first imperative was to change external structures.

Liberation Theology, anyone? Since we can all see how well it worked and what glories it brought to Latin America...

A homily that EVERY Christian would benefit from reading & embracing. Just today, a client of mine was telling me that she sits on the charitable giving board of her Methodist church. She was bragging, of a sort, that their Church's giving runs into the tens of thousands of dollars & that it takes 4 typewritten pages to list all the "charities" they support. Then, she started to give examples: Boys & Girls Clubs, battered women's shelter, several secular food banks, Red Cross, etc. I asked her if she was aware that NONE of these organizations will disclose the REAL source of these financial blessings to the individuals who are being helped. In fact, they actually go out of their way to suppress any mention of God or The Church or the concept of Christian charity. I know, because I held a similar board position at an Episcopal Church (before my conversion to the RC Church). We were giving $5,000/year to the local battered women's shelter. We offered to also supply the shelter with copies of The Bible (ala the Gideon's) so that any woman who wanted one could have one free. We were given a most emphatic "NO!" They were quite insistant that they didn't want anything in that shelter that might suggest that they were in any way associated with a particular religion or religious group. Happy to take God's money, though. When it came right down to it, my client could only name 9 charitable organizations that were NOT entirely secular in nature. Just 9 out of her list that went 4 pages! Please think about that if any of you are in a position to help decide where God's money is being spent. As Mother Teresa said, the greatest poverty is not knowing Jesus.

Your post demonstrates why I give pretty much to strictly Catholic charities. Not Catholic Charities, but LifeLine Coalition, St. Vincent de Paul, etc.

The Holy Season of Lent -- Fast and Abstinence

The Holy Season of Lent -- The Stations of the Cross

Why We Need Lent

MESSAGE OF HIS HOLINESS BENEDICT XVI FOR LENT 2006