TARPON SPRINGS, Fla. — Jack Vasilaros stood wet and shivering in St. Nicholas Greek Orthodox Cathedral Friday, grasping in one hand a trophy and in the other a wooden cross he had just retrieved from the chilly waters of a bayou a few blocks away.

The 16-year-old 10th grader from nearby Clearwater Beach had just become an instant celebrity in this heavily Greek-American community by being the first of more than 50 teen boys to emerge from the 64-degree water with the Epiphany cross as thousands cheered from the sloping banks of Spring Bayou.

"It's going to change my life forever," Vasilaros said, as his father draped a leather jacket over his shoulders to stop his teeth from chattering. "I don't know what it's going to bring, but the memory will stay with me forever."

What it brought immediately for the boy was a special blessing from Ecumenical Patriarch Bartholomew I, the spiritual leader of the world's 200 million-plus Orthodox Christians, who traveled from his headquarters in Istanbul, Turkey, for the 100th annual Epiphany celebration here.

Equal parts religious ceremony and community festival, the celebration every Jan. 6 marks the day that Orthodox Christians believe Jesus was baptized in the River Jordan. It's grown to be the largest Orthodox Epiphany event in North America and the signature festival for Tarpon Springs, a town of about 24,000 residents that regularly attracts tourists to its working sponge docks and many Greek restaurants.

This year's Epiphany crowd — treated to sunny skies and temperatures around 60 degrees — was estimated at more than 50,000.

"We salute you for your steadfastness in maintaining the faith of your ancestral tradition, as well as your love for the beautiful, spiritual, cultural and folk traditions in which you reverently persevere," Bartholomew said in his morning liturgy, delivered in Greek. "Truly it is out of respect and love for the memory of your forebears that you have clung to your ecclesiastical and ancestral customs."

At Spring Bayou the boys, all between 16 and 18 and clad in swim trunks and white T-shirts, waited in 10 small boats as Bartholomew blessed the waters and tossed the white cross. After about 15 seconds of swimming and chaotic flailing of arms and legs, Vasilaros broke the surface with his prize held high.

"When I saw it I grabbed on to it so tight," he said, recalling stories about boys before him who had picked up the cross and then dropped it.

Vasilaros was carried into the cathedral on the shoulders of two of his fellow divers. For 18-year-old Billy Stamas, it was the third time he had delivered the cross-bearer on his shoulders. He said it was an honor, even though he failed to retrieve the cross in each of the three years and would no longer be eligible to participate.

"It's divine intervention," Stamas said. "If God wants you to have it, you will have it."

On Saturday, Bartholomew will make a quick trip to New Orleans, where he is scheduled to be joined by Roman Catholic Archbishop Alfred Hughes for a visit to flood-damaged areas of the Lower Ninth Ward.

Afterward, Bartholomew will conduct a brief Doxology, a service of thanksgiving, at the Holy Trinity Cathedral, badly damaged and flooded in the hurricane.

Please ping the other Orthodox believers. I can't remember them all.

Journeying with the Magi

The Magi and the Host

Who Were The Magi?

Were the Magi who visited Jesus -- Persian?

The Journey of the Magi

Thousands watch teens dive for the cross in Tarpon Springs

3 posted on 01/07/2006 6:46:10 AM PST by Salvation (Â†With God all things are possible.Â†)
[ Post Reply | Private Reply | To 1 | View Replies]
To: bornacatholic
as his father draped a leather jacket over his shoulders to stop his teeth from chattering

May I suggest a towel?

But, it wasn't the Cross referred to in the story. It doesn't sound to me like young Jack is going to be selling the Cross he found

They still do this? How cool.

I just caught the very tail end of the live broadcast on the live link you posted, pretty cool. The commentators mentioned the Patriarch will also be travelling to New Orleans.

Thank you brother in Christ. Today, however, was the "other" Orthodox Christmas (according to the Old-Calendar) for some 85% or more Orthodox in the world. Our Feast of the Epiphany will be in two weeks, done the same way, of course. But, your gesture of good will is much appreciated, regardless of the Calendar of course. :-)

Didn't the East once celebrate the birth of Christ on Epiphany?

11 posted on 01/07/2006 9:48:42 PM PST by RobbyS ( CHIRHO)
[ Post Reply | Private Reply | To 10 | View Replies]
To: RobbyS; Kolokotronis
The majority of Orthodox Christians use what is now called the "Old" Calendar, which was the original Calendar of the whole Church, both east and west. When Pope Gregory intriduced the so-called "New" or "Gregorian" Calendar in the west, the days were shifted 15 days forward.

According to the "Old" Calendar, the Birth of Christ is celebrated on December 25th, which is January 6th by the "New" or Gregorian Calendar.

In 1920 or so, the Ecumenical Patriarch in Constantinople (Istanbul), was pushing for changes in the Orthodox Church. I am not sure what his reasons were, but allegedly being a Freemason his motives must be viewed with suspicion. All of his proposals were aimed at making the Eastern Orthodox Church "appear" more "western." Thus, he proposed clean shaven priests, the use of Anglican "dog-collar," and the use of the Gregorian Calendar.

Some Churches (Greek, Romanian, Bulgarian etc.) accepted the so-called New Calendar since then, and some of their priesthood sport a distinctly "western" look.

While by far most of the 15 or so Orthodox Churches in communion with the EP use the New Calendar, by far the largest Orthodox group, the Russian Orthodox Church, and some smaller ones, such as Serbian, etc. have retained the Old Calendar in Church use.

It is important to note that Pascha (aka "Easter") is celebrated by ALL Orthodox Churches according to the Old Calendar, which determines the day of Pascha based on the Jewish lunar and Roman solar calendars. The importance of this is that the central feast of the Church is celebrated by all Orthodox Chirstians on the same day regardless which Calendar they use, and that the occurrence of Pascha is never before the Jewish Passover, but always the first Sunday following the Passover, for historical accuracy.

So, the use of the New Calendar is a sore spot from the perspective of Orthodox unity, but at the same time the provisions were made to assure that the Calendar does not divide us or that it does not corrupt our theology and tradition, although the reasons for the New Calendar in Church use remain a mystery to me.

Christ is born! Magnify Him!

12 posted on 01/08/2006 4:48:43 AM PST by kosta50 (Eastern Orthodoxy is pure Christianity)
[ Post Reply | Private Reply | To 11 | View Replies]
To: kosta50
Yep. I was just citing the article. I should have added what you did. In fact, at Mass today our Priest spoke about just that and noted he had been speaking with an Orthodox Priest in Pittsburgh yeaterday and they chatted about Christmas etc.

I think that maybe I'll haul the Bride over to Tarpon Springs next year and witness the festivities. One can't get enough of these public professions of Faith.

Maybe one of these days, our Catholic Diocese will wake-up and get a clue...

13 posted on 01/08/2006 7:37:04 AM PST by bornacatholic
[ Post Reply | Private Reply | To 10 | View Replies]
To: bornacatholic
I hope you dind't take it the wrong way. It was simply an "oh, by the way comment" because in the west it is not often spoken of. What's more important is that you made the effort to share this with us, and for that I thank you.

You are not the only voice. There are clergy and laity who share your sentiment. Chief amongst you is none other than +Benedict XVI.

The Ecumenical Patriarch Bartholomew I, the spiritual leader of the worldwide Orthodox Christian Church, steps over rubble as he surveys devastation at the site of the break in the inner harbor navigational canal Saturday, Jan. 7, 2006, in the Lower Ninth Ward district of New Orleans. Bartholomew laid flowers and prayed for the victims of Hurricane Katrina. 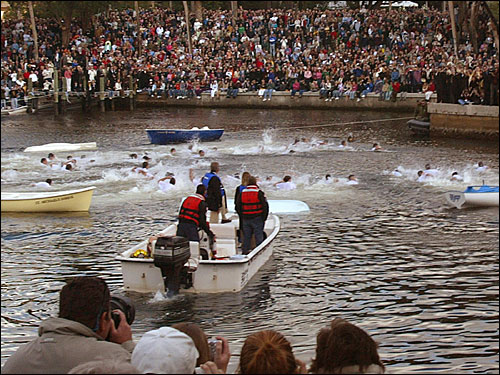 Here, boys swim from small boats to reach the Epiphany cross tossed into Spring Bayou in Tarpon Springs, Fla. The tradition in Tarpon Springs, now in its 100th year, began as Greeks came to the area to find work in the sponge diving industry.

While it probably isnt' the best of ideas, the sale of this material may provide someone with the joy of obtaining these materials who otherwise may not have been able to attend the actual event and had desired to attend.
just my opinion...

I gotta say I LOVE his public personna, words, bearing,vestments ect. Such contra mundum clothing, bearing, actions, speech and behavior reminds all that some are chosen by God and ordained to serve Him and in serving Him, serving us. It is really a wonderful thing to behold such dignified dress, bearing, and demeanor- especially in egalitarian American.

Our Tradition teaches Vestments were created to remind all of the world that the Priest/Patriarch/Pope (especially during service at the Altar), "in a sense leaves the earth and enters another world, the shimmer of which is mirrored in his vesture"

When I was young, a LONG time ago, I was used to seeing Clerics in the Roman Collar and Bishops wonderously attired appearing in public.

I pray the great example of your Patriarch will remind our Prelates that such vestments serve as a witness to Christ amongst the World and if there is one thing we Latins must recapture, it is a sense of dignity, decorum, bearing, humility and honor, all of which are virtues personified by your Patriarch.

18 posted on 01/08/2006 11:00:24 AM PST by bornacatholic
[ Post Reply | Private Reply | To 14 | View Replies]
To: bornacatholic
Thanks bornacatholic. +Benedict XVI is reviving the patristic beauty of the Church in the West, externally and internally. Just as his predecessor, +JPII started, the Latin Church is making a bold move for a historic moment. +Benedict XVI says the Church is moving "irreversably towards a reunion." We may not live here long enough to see it, but we can all see it in a different way.

In my lifetime, our particular Churches went from complete separation to withdrawls of excommunications, to inter-Church dialogue, etc. all the way to +Bartholomew I, not so long ago, sending greetings to "Our beloved Roman Catholic Church" while responding to a papal legate who paid him a visit in Instanbul.

So, while it may not be ours to see, we should continue to pray, but remember that the clergy and laity must step forward and initiate these changes.

19 posted on 01/08/2006 5:15:37 PM PST by kosta50 (Eastern Orthodoxy is pure Christianity)
[ Post Reply | Private Reply | To 18 | View Replies]
To: bornacatholic
Thanks bornacatholic. +Benedict XVI is reviving the patristic beauty of the Church in the West, externally and internally. Just as his predecessor, +JPII started, the Latin Church is making a bold move for a historic moment. +Benedict XVI says the Church is moving "irreversably towards a reunion." We may not live here long enough to see it, but we can all see it in a different way.

In my lifetime, our particular Churches went from complete separation to withdrawls of excommunications, to inter-Church dialogue, etc. all the way to +Bartholomew I, not so long ago, sending greetings to "Our beloved Roman Catholic Church" while responding to a papal legate who paid him a visit in Instanbul.

So, while it may not be ours to see, we should continue to pray, but remember that the clergy and laity must step forward and initiate these changes.