In a homily given in 1999, Pope John Paul II said, “The Heart of the Lord is the starting point of the holiness of each one of us.” I have always had a devotion to the Sacred Heart of Jesus. My favorite image is the one distributed by the Priests of the Sacred Heart in Wisconsin. Our Lord’s eyes seem to say, “I love you, come to Me.” 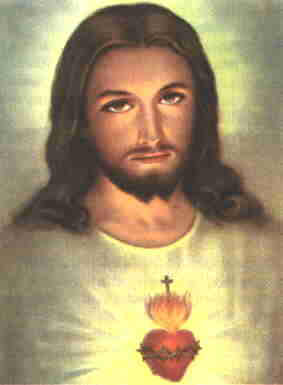 An Act of
Consecration to The
Sacred Heart of Jesus

9 posted on 07/22/2005 12:39:43 PM PDT by Hermann the Cherusker
[ Post Reply | Private Reply | To 1 | View Replies]
To: Hermann the Cherusker; sandyeggo; Marcellinus; GipperGal; Patrick_k; Frank Sheed; Salvation
Maybe if the Church still celebrated the feast of the Eucharistic Heart of Jesus (Thursday after the feast of the Sacred Heart), there wouldn't be these problems.

There is a group here in the Albany Diocese, who for the past 26 years have organized an all night vigil beginning on the Feast of the Sacred Heart of Jesus and ending with Mass at 3am the following day on the Feast of the Immaculate Heart of Mary. That fell on Saturday morning this year and they were unable to find a priest to celebrate that Mass. Then someone remembered our Maronite pastor and made the phone call.

Like most Maronite priests, our pastor is very devoted to the Blessed Mother and agreed to do the Mass but insisted that it be the Maronite Divine Liturgy. What he did not tell them, though, was that his mother and brother were arriving from Lebanon on Friday night. The drive from Kennedy Airport to Albany NY, on a good day, is approximately 3 1/2 hours. The flight was delayed, but Father made it up here by midnight. It took a while to settle his family into the rooms he rented for them during their visit. He was exhausted but refused to close his eyes for fear he might fall asleep.

As you probably know, the Maronite liturgy is chanted. It can be done without musical accompaniment but suffers in the process. 3 of us arrived at 2:30am to prepare those present for this beautiful experience. Our organist warmed up the ancient organ, the Parish Administrator brought the missalettes we would be using and I supplied a trifold brochure (my own invention), that explains the various parts of the Maronite Divine Liturgy to Roman Catholics. The small brochure also gives a brief history on the Maronite Church while explaining that communion is by intinction and only on the tongue. No Eucharistic Ministers! No communion in the hand! It invites Roman Catholics to experience this liturgy while explaining that it fulfills the requirements for Mass attendance.

The turnout at 3am was one of the largest they have experienced in years! Word had spread throughout the community that the Mass would be a Maronite Divine Liturgy and that apparently drew them to the Church.

Father delivered one of his awesome homilies. He noted that the Mass at 3am dates back to the monks who would rise at 2:30 to begin their daily prayers. He spoke so lovingly of the Blessed Mother and her role in the plan of divine salvation. Afterwards, one old woman grabbed my arm and asked me to thank Abouna for saying this beautiful liturgy. I told her to wait a few minutes and she could share it with him personally.

I could go on at length about the situation here in Albany but I truly believe with all my heart that our Lord, His Blessed Mother and His grandmother, St. Ann, the patroness of our parish, has begun to call local area catholics to this simple, humble and holy priest. He refuses to compromise the faith and delivers weekly homilies that so many devout catholics crave to hear but don't, because they are confused by Eastern vs Western. I am totally commited to spreading the news, via my small trifold brochure, and welcoming any visitor who shows up at our small parish. Each of them unfailingly compliments Father on his homily.

Please remember this priest in your prayers! Earlier this week, he attended a mandatory retreat in San Diego. Not wanting to waste one second away from his parish, he took the red eye special out of CA, arriving at 11:30pm the other night. He was back only one day when he received a phone call asking him to come to Boston. One of our young parish families gave birth to a child in November of last year. He arrived in this world with serious heart problems and underwent several surgeries to save his life. Two weeks ago, he was flown to Boston where he underwent another 7 hour open heart surgery, after which the doctors told the family they had done all they could and that his hopes of survival were slim. His condition deteriorated over the past few days and today, the medical team told the family it was time to take their child off of life support.

Father drove to Boston to counsel, pray and assist the young couple through what has to be a parent's worst nightmare. Baby Michael David Hannoush died peacefully this evening, surrounded by his loving family. Please remember this young couple in your prayers. This was their only child.

http://www.sscc-lb.org/
Since 1853. Congregation of the Sacred Hearts of Jesus and Mary.
Unfortunately it is in French!