TOPICS: Anthrax Scare; Foreign Affairs; Free Republic; Government; News/Current Events; War on Terror
KEYWORDS: alqaeda; alqaedaandiraq; anthrax; binladen; bushdoctrineunfold; canthandlethetruth; frlibrarians; iraq; jihadinamerica; osamabinladen; patriotlist; presidentbushlist; saddam; warlist; waronterrorism Navigation: use the links below to view more comments.
first 1-20, 21-40, 41-53 next last
1 posted on 03/16/2003 8:11:05 AM PST by Republican_Strategist
[ Post Reply | Private Reply | View Replies]
To: Republican_Strategist
I've ignored this topic only because we are justified in going to war with Iraq, even if there is absolutely no connection between Iraq and Al-Qaeda. When Hussein's regime is toppled, those connections will be of little relevance to average Americans. Rather they will be a source of information for our CIA/FBI/etc.
2 posted on 03/16/2003 8:16:35 AM PST by Voice in your head (Nuke Baghdad)
[ Post Reply | Private Reply | To 1 | View Replies]
To: *Anthrax; *Bush Doctrine Unfold; *CantHandleTheTruth; *FR Librarians; *Osama bin Laden; ...
Anthrax Bump List

Wonder if they (the US Administration ) are sitting on this info and plan to use it at the appropriate time?

Seems to have arrived.

I thought you all may be interested in this resource given you have done so in the past. I would like to ask the following:

1) Help spread the word (email, pinging, etc.)
2) Include any important articles that weren’t included on the topic.
3) Cross link any future articles on the topic.
4) Include link to this thread on all threads pertaining to Iraq and the proposed war.

I’m going to write my congressman and senator. I’m also going to write the President and I plan to email media outlets as well. I would encourage everyone else do the same if they can find the time.

Freep on!
7 posted on 03/16/2003 9:46:45 AM PST by Republican_Strategist (Win the War on Terrorism - Bomb Iraq!)
[ Post Reply | Private Reply | To 1 | View Replies]
To: Republican_Strategist
One Million FRegards for this tremendous source of excellent information - THANK YOU SO MUCH!

What Every FReeper Needs to Know - The Enemy Within - (A.N.S.W.E.R.) Plans Mass Sabotage

KSM is known in al-Qa’eda circles as ‘The Brain’, and his picture on the FBI ‘Most Wanted’ list shows a cold but dapper fellow with a trim beard — like the Westernised Arab academics who play the talkshow circuit or, indeed, an assistant choreographer on a Broadway revival. . .

By contrast, the fellow seized in Rawalpindi is a wreck — haggard, bleary, unshaven, a loser who’s run out of everything except back hair. Asked to account for the stark difference in appearance, several experts pointed out that he’s a ‘master of disguise’. In that case, the master of disguise is doing a great job of convincingly passing himself off as a guy who’s been sleeping in a hedge for a month. The state of KSM provides a glimpse of the career options available to top al-Qa’eda honchos: either, like bin Laden, you go into deep cover as a few specks of DNA discreetly sprinkled in the rubble of Tora Bora, or, like ‘The Brain’, you’ve a choice between hunkering down in a ‘safe house’ or staying on the move, never knowing, even when you’re motoring through the emptiness of the Yemeni desert, if some unmanned CIA Predator will drop the big one on you. Of course, many al-Qa’eda operatives are hoping to be on a fast track to martyrdom and the 72 virgins. But you gotta have a couple of guys who stay alive long enough to instruct the neophytes in how to kill themselves, and right now al-Qa’eda’s management structure is looking severely hobbled. 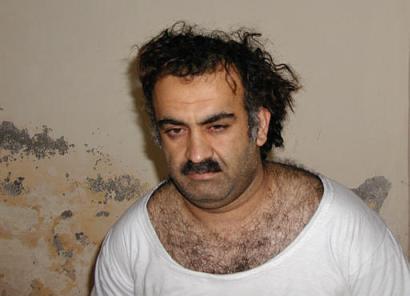 Needs to be front and center.

A young Muslim man, who refused to give his name, shows his feelings toward the media outside the Federal Court House in Buffalo, New York September 18, 2002 where he sat to show his support for the six local suspected al-Qaida supporters who appeared inside the court, September 18, 2002. The six men have been charged with providing material support to al Queda from nearby Lackwanna, New York.

Preacher 'encouraged Muslims to wage war on all non-believers'

The True Furqan can be located on HERE or HERE


Saddam Hussein's regime has opened talks with Osama bin Laden, bringing closer the threat of a terrorist attack using chemical, biological or nuclear weapons, according to US intelligence sources and Iraqi opposition officials.

The key meeting took place in the Afghan mountains near Kandahar in late December. The Iraqi delegation was led by Farouk Hijazi, Baghdad's ambassador in Turkey and one of Saddam's most powerful secret policemen, who is thought to have offered Bin Laden asylum in Iraq.


The Saudi-born fundamentalist's response is unknown. He is thought to have rejected earlier Iraqi advances, disapproving of the Saddam Hussein's secular Baathist regime. But analysts believe that Bin Laden's bolthole in Afghanistan, where he has lived for the past three years, is now in doubt as a result of increasing US and Saudi government pressure.


News of the negotiations emerged in a week when the US attorney general, Janet Reno, warned the Senate that a terrorist attack involving weapons of mass destruction was a growing concern. "There's a threat, and it's real," Ms Reno said, adding that such weapons "are being considered for use."


US embassies around the world are on heightened alert as a result of threats believed to emanate from followers of Bin Laden, who has been indicted by a US court for orchestrating the bombing last August of embassies in Kenya and Tanzania, in which 259 people died. US delegations in Africa and the Gulf have been shut down in recent weeks after credible threats were received.


In this year's budget, President Clinton called for an additional $2 billion to spend on counter-terrorist measures, including extra guards for US embassies around the world and funds for executive jets to fly rapid response investigative teams to terrorist incidents around the world.


Since RAF bombers took part in air raids on Iraq in December, Bin Laden declared that he considered British citizens to be justifiable targets. Vincent Cannistraro, former chief of CIA counter-terrorist operations, said: "Hijazi went to Afghanistan in December and met with Osama, with the knowledge of the Taliban leader, Mullah Omar. We are sure about that. What is the source of some speculation is what transpired."


An acting US counter-intelligence official confirmed the report. "Our understanding over what happened matches your account, but there's no one here who is going to comment on it."


Ahmed Allawi, a senior member of the opposition Iraqi National Congress (INC), based in London, said he had heard reports of the December meeting which he believed to be accurate. "There is a long history of contacts between Mukhabarat [Iraqi secret service] and Osama bin Laden," he said. Mr Hijazi, formerly director of external operations for Iraqi intelligence, was "the perfect man to send to Afghanistan".


Analysts believe that Mr Hijazi offered Mr bin Laden asylum in Iraq, most likely in return for co-operation in launching attacks on US and Saudi targets. Iraqi agents are believed to have made a similar offer to the Saudi maverick leader in the early 1990s when he was based in Sudan.


Although he rejected the offer then, Mamoun Fandy, a professor of Middle East politics at Georgetown University, said Bin Laden's position in Afghanistan is no longer secure after the Saudi monarchy cut off diplomatic relations with, and funding for, the Taleban militia movement, which controls most of the country.


Mr Fandy said senior members of the Saudi royal family told him in recent weeks that they had received assurances from the Taleban leader, Mullah Mohamed Omar, that once the radical Islamist movement secured control over Afghan territory, Bin Laden would be forced to leave. "It's a matter of time now for Osama." He said Bin Laden would have a strong ideological aversion to accepting Iraqi hospitality, but might have little choice.