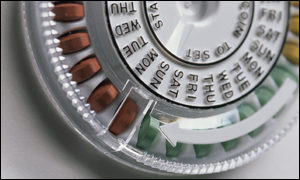 Older women are most at risk from the Pill

Women who have taken the contraceptive Pill at any stage in their lives have a slightly increased chance of developing breast cancer, research shows.

Their risk rose by just over a quarter (26%), compared with women who had never used the Pill.

This is slightly higher than previous studies have estimated.

The latest research showed those who had taken the Pill over longer periods increased their risk of breast cancer by 58% compared with those who never used it.

However, the highest increased risk (144%) was among women aged over 45 who were still using the Pill.

Dr Merethe Kumle, who carried out the research, said: "It is clear that oral contraceptives increase a woman's risk of developing breast cancer, particularly when they are used in the later period of reproductive life."

The study, presented at the third European Breast Cancer Conference in Barcelona, used data collected from 103,000 women aged between 30 and 49.

Dr Kumle from the Institute of Community Medicine in Tromso, Norway, collaborated with researchers in Sweden and France to assess data from the Women's Lifestyle and Health study carried out in Norway and Sweden.

The women were originally contacted in 1991/92 and followed through to December 1999.

During that time, 1,008 cases of breast cancer had been detected.

Most of the women who had taken the Pill had used the more modern brands that are currently prescribed by doctors.

She said: "Oral contraceptives have a lot of advantages as well as disadvantages.

"The total number of deaths from any cause among women who use oral contraceptives is likely to be lower than women who have never used the Pill - just as with hormone replacement therapy."

She added: "The Pill has made it possible for women to decide when and how many children they will give birth to - something which has revolutionised women's lives and is an important issue in women's rights."

The absolute risk of a woman developing breast cancer under the age of 40 is very low, says Dr Kumle.

She also stressed that modern oral contraceptives have much lower hormone doses in them than the older ones, which caused an unacceptably high number of adverse effects.

Professor Valerie Beral, who is head of Cancer Research UK's Cancer Epidemiology Unit in Oxford, said this study was in line with previous research, although the figures differed.

She said: "We have done a study of 54,000 women with breast cancer and found there is a small increased risk of developing the disease from taking the Pill.

"We found a 24% increase in risk while women were currently taking the Pill.

"However the risk fell away to the same as women who had never taken the Pill, within 10 years of them discontinuing its use."

The incidence of breast cancer has been rising in Western countries over the past 30 years.

The use of oral contraceptives is one reason, but girls starting their periods earlier, women having fewer and later births, later menopause and a tendency to being overweight are also influential.

Dr Kumle said: "We found a slightly increased risk of breast cancer among users of the Pill, but it is important to underline that young women using the Pill are not playing hazard with their health.

"As contraception, the Pill should still be the drug of choice for young women."

TOPICS: Breaking News; Culture/Society; Extended News; Front Page News; News/Current Events
KEYWORDS: abortion; cancer; pill Navigation: use the links below to view more comments.
first 1-20, 21-40, 41-60, 61-70 next last
The Pill causes cancer, but dammit, our girls should all take it because we know they are all loose whores.
1 posted on 03/23/2002 4:46:11 PM PST by Notwithstanding
[ Post Reply | Private Reply | View Replies]
To: Notwithstanding
I sacrificed my right breast on the altar of Premarin in 1994. The doctors at that time ADMITTED that my history of 10 years on Enovid birth control, coupled with the use of Premarin, would be the obvious cause of the cancer. Yet, they still continue to prescribe what has to be the most heavily prescribed medication in the world.
2 posted on 03/23/2002 4:53:44 PM PST by redhead
[ Post Reply | Private Reply | To 1 | View Replies]
To: Notwithstanding
WOW. This came out of the BBC??!! I'm stunned, but not as stunned as I'll be when they start paying attention to the abortion studies.

I would be curious however, to see if they factored in any history of abortions with these Pill-related cancers. That could be abnormally skewing the data towards higher percentages.

To: Notwithstanding
But gee whiz, certain brands of the Pill (OrthoTriCyclene) will clear up your complexion. Clear skin? Breast cancer later in life? Golly gee what a tough decision for a girl to make.

/Sarcasm. As a nurse, I was astounded that they marketed oral birth control with the ADDED benefit of being good for your complexion. What next? Chemo as the ultimate dipilatory? The drug companie$ pander to the female con$umer. SeraFem (agressively marketed at women experiencing everything from PMS to perimenopause) is Prozac in (literally) a pink package.

Isn't that amazing, and the doctor in the study said the same, they know all these hormones cause cancer but still encourage women to take them for the 'benefit of their health'. Incredible. To me, the other benefits can be obtained via a heart healthy lifestyle and mineral supplements without the cancer risk.

P.S. I bet that Premarin was discontinued mighty fast once you were diagnosed.

6 posted on 03/23/2002 5:18:04 PM PST by Canticle_of_Deborah
[ Post Reply | Private Reply | To 2 | View Replies]
To: Notwithstanding
Is the the pill that increases the risk of breast cancer, or is it not getting pregnant? They've known for a long time now that getting pregnant seems to have a protective effect on women's breasts.

I guess you could say it is a case of "use 'em or lose 'em"
7 posted on 03/23/2002 5:18:30 PM PST by mamelukesabre
[ Post Reply | Private Reply | To 1 | View Replies]
To: PennsylvaniaMom
Oh yes! BUMP for you and everything you said! Absolutely true.
8 posted on 03/23/2002 5:20:05 PM PST by Canticle_of_Deborah
[ Post Reply | Private Reply | To 5 | View Replies]
To: redhead
My wife had a mastectomy, same side, at 31 years old. I will ask her tomorrow about the pills.
9 posted on 03/23/2002 5:26:08 PM PST by jwalsh07
[ Post Reply | Private Reply | To 2 | View Replies]
To: goldenstategirl; redhead
RH, hope you are cancer free. Premarin (PRE)gnant (MAR)e ur(IN)e is heavily prescribed. When I was in nursing school I had a prof who explained to us that the urine is 'caught' in rubber bags that the mares wear continually. That they can't lay down, and that the foals are 'useless' and destroyed. She questioned aloud what the risks would be a generation away for human use of equine estrogen. I think we are all beginning to see the tip of the iceberg of 'better living thru chemistry.'
10 posted on 03/23/2002 5:31:13 PM PST by PennsylvaniaMom
[ Post Reply | Private Reply | To 8 | View Replies]
To: bookworm89;mamelukesabre
The Pill does not have a protective effect on the breast. It works by playing with the estrogen and progesterone levels in the female body. Many, but not all, breast cancers are estrogen dependent. Adding even more estrogen to a woman's body is not necessary and downright hazardous. While estrogen-replacement therapy may be needed short-term at menopause and the Pill is beneficial for certain reproductive disorders, largely it's a bad idea. Of course, this last part is my personal opinion and there are probably others out there willing to take the added risks for the benefits. I'm not.

Pregnancy has a protective effect on the breast because the process converts undifferentiated, immature breast cells into differentiated milk cells. For a really good explanation of the biology of this, see Dr. Joel Brind's website at www.abortioncancer.com

As for women having less abortions because they are on the Pill, you'd think that would be the case. I did, but I recall reading some studies (sorry can't recall where-I read a lot:) that said many women on the Pill have had abortions. Now whether they were placed on the Pill after the abortion or if it was a Pill failure, I don't know.

11 posted on 03/23/2002 5:31:31 PM PST by Canticle_of_Deborah
[ Post Reply | Private Reply | To 4 | View Replies]
To: bookworm89
The Pill is the very reason abortion is so prevalent.
Pill users get pregant all the time (failure to work as expected, failure to use it properly, etc.)
But since users of contraception consider themselves entitled to not get pregnant since they took precations, they justify abortion.

Women have been convinced that they have a right to not be pregnant, regardless of how many times they happily lift their ankles up to the sky.

12 posted on 03/23/2002 5:34:44 PM PST by Notwithstanding
[ Post Reply | Private Reply | To 4 | View Replies]
To: Notwithstanding
Women have been convinced that they have a right to not be pregnant, regardless of how many times they happily lift their ankles up to the sky.

Your imagery is rather perjorative, IMO. Certainly lots of married women, faithful to their husbands, use oral contraceptives.

No matter who she is, the woman who engages in sex (and the men who encourage it) with the demand that procreation will not happen is abusing her sexuality. Of course others disagree. But nature seems to back me up in this regard since so many people who "take precautions" end up pregnant. No one having sex has any right to think that pregnancy is impossible. We all know better. Shame on those who pretend otherwise - and then kill the babies that inconveniently result.

The leg raising example is really about the kids in high school and college who are encouraged to get their legs in the air as early as possible.

To: RJCogburn
BAck to the article - women should know about this cancer risk when making their choice to "bop without consequences" - because there actually are consequences.
17 posted on 03/23/2002 5:50:36 PM PST by Notwithstanding
[ Post Reply | Private Reply | To 13 | View Replies]
To: Notwithstanding
Pill users get pregant all the time (failure to work as expected, failure to use it properly, etc.)

Maybe the instructions should read:

Grasp tightly between knees and keep it that way until male departs room.

Although there is an increase in the risk of breast cancer, so monitoring is essential, the estrogen pill has been shown in study after study to REDUCE dramatically the risk of heart attack (up to 70% reduction), a 90% reduction in the insidence of stroke, and reduced risk of other forms of cancer, including lung cancer. And women on estrogen replacement therapy do not get Ahlzheimer disease.

So ladies, stay sane, and take your pill!!!!