The airwaves are full of the latest “kill shot” on Senate candidate Kelly Tshibaka.

In this ad, the Senate Majority Leadership Fund, run by Senate Minority Leader Sen. Mitch McConnell, makes it appear that Tshibaka actually confesses to committing fraud when she was employed by the federal government. It’s a lie, but this is McConnell’s attempt to prop up Sen. Lisa Murkowski, and this is after all, October, the witching month when the worst of the political ads hit the airwaves.

McConnell has gone against the Alaska Republican Party, which endorsed Thsibaka over 18 months ago, censured Murkowski, and asked Murkowski to leave the party.

“Mitch McConnell has obviously decided he prefers a senator who is a more dependable vote for Joe Biden than anything else. In doing that, he’s ignoring the official position of the Alaska Republican Party, which is that Lisa Murkowski has to go. These ads attacking Kelly Tshibaka are an attempt to override the views of tens of thousands of Alaska Republicans,” said Mary Ann Pruitt, consultant to the campaign.

“This is a dark money ad full of lies. Kelly Tshibaka’s job was to keep federal employees honest, and some of them filed complaints against her in retaliation. Following a full investigation, she was exonerated and was, in fact, subsequently promoted, proving how ridiculous this ad is,” Pruitt said.

“After 21 years in the Senate, Lisa Murkowski knows Alaskans can see that she’s become too liberal and sides with the D.C. insiders over Alaska residents. And her D.C. pals are coming to her defense with smear tactics like this dishonest, negative attack ad. Murkowski always tells us that she’s against dark money — except when it’s being spent to benefit her,” Pruitt said.

I have never wished something really REALLY BAD would happen to a fellow republican, Don Sundquist not withstanding. That just changed. 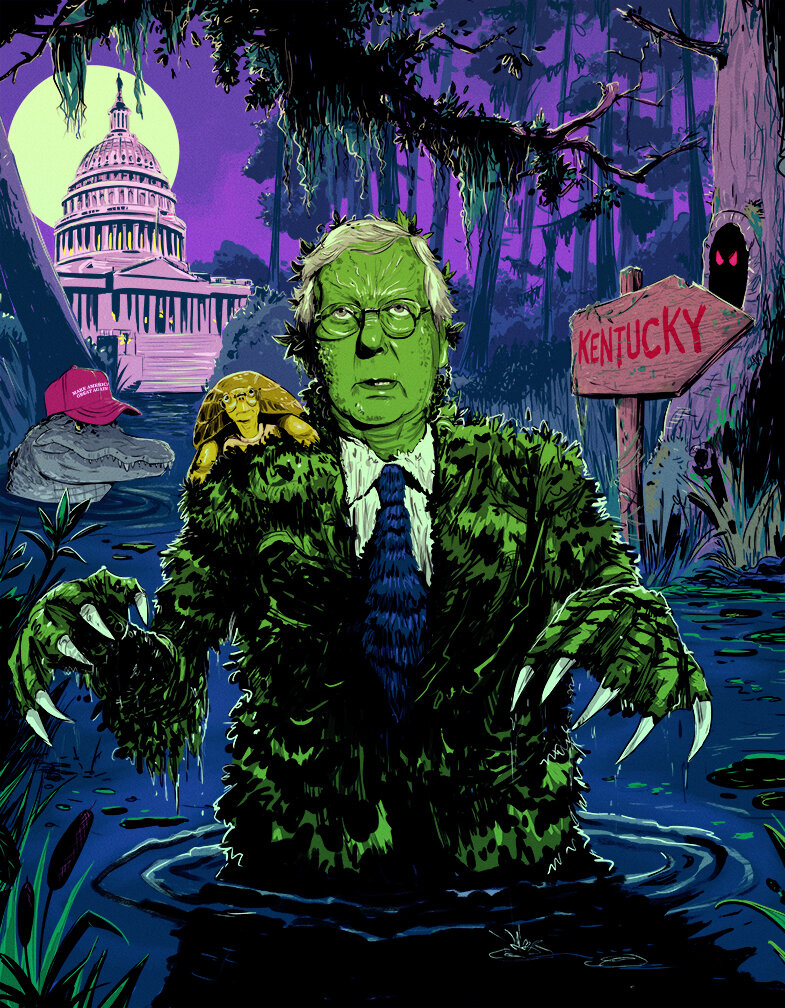 Believe defunding the government has to start with the politicians, almost all are corrupted and beyond repair.

Evil people rule over us.

It’s weird how both parties pick the worst people for leadership. Republican house really does a crappy job and has for decades. Mcconnell I appreciate what he did with the Supreme Court. He easily could’ve allowed garland to get his appointment on the Supreme Court. And quite frankly the fact that he didn’t will pay dividends much longer than any bill or support for a Republican.

Mitch is a BITCH who needs to be DITCHED!

Agreed. We have Louisville to thank for him and the vote stealing cabal.

Aw, c’mon. don’t hold back, tell us what you REALLY think.

Just a RINO that has a secret crush on the glory that goes along with positions of political power, but is also envious of the kind of discipline the Democrat Socialists can muster almost without conscious effort, Mitch does his dance in corners where he thinks he is out of the public eye. But it is not possible to cover up the mischief that Lisa Murkowski has done over the years, and the vast chicanery that has gone into her grip on her particular “safe seat”.

Some people do not care whether they are remembered well or not after they have gone. But history does.

Both have monetary ties that go back decades and she is a dependable Mitch vote during money sharing deals {both open and under the table}.

Mitch is not just a senator, he is the pubbie swamp bag man, doling out the public bucks.

Not so weird. To varying degrees, they all share a commin trait. The lust for money and power. McConnell is one of the worst of them. I could list here all he has done over the years to those ends but we all know and I don't have the time. Just start with his wife.

In some ways, Mitch is our Pelosi, perhaps even our Angela Merkel.
His general manner is usually so non-dynamic, most people dont pay close attention to his actions until it’s too late, the negative consequence is baked into the legislature.

THE GOP NEEDS TO FLUSH THE TOILET BEFORE WE CAN MAKE SOME REAL CHANGES, HE IS A CRIMINAL LIKE THE RATS

Murky refused to vote for Kavanaugh but voted for the diversity hire who couldn't define what a woman is. She votes like a Dem and is RINO scum. Burn it down. Give AK the Democrat if the voters can't open their eyes to Murky.

Mitch is trying to make the Senate Trump-proof. He knows MurCOWski will help him with any impeachment proceedings.

This scumbag is why you never elect senators for president, notice the rats use these crooks as a go-to for their leaders. Fortunately the GOPe hasn’t elect one of these crooks directly from the senate in over a century.

The Great Compromise appears as the only flaw in the Constitution, the Founders saw these seats as a way to protect each perspective state from the others, little did they realize that one day they would coalesce their power into a political party instead, and top of that would evolve where the two major parties overlap to such a degree that it is nicknamed the uniparty.

Repealing the 17th would be a good place to start but it going to take much more than that. But no worries, our nation is going to collapse anyway from unsustainable debt that Turkey Neck Gobbler is first and foremost the leader in debt ceilings being raised every time...and is coming up soon.

Murkowski is a cancer made of this.

What do you expect from McConnell? He wants to maintain his position in the Senate and he knows Lisa Murkowski opponent would vote for someone else for Leader. So Plain and Simple!!! POWER not the American People.

Where is China Mitch getting the money to run these ads?