• Retail workers in August walked out on their jobs at one of the highest rates in the nation, with a total 721,000 quitting that month, according to the latest numbers from the Bureau of Labor Statistics.
• Their quit rate — which the Labor Department in its release said “can serve as a measure of workers’ willingness or ability to leave jobs” — was 4.7% in August, a high since April. In the wider labor market, the overall quitting rate rose to a series high 2.9%, while the rate of layoffs and discharges was little changed at 0.9%, per the report.
• Job openings in retail are piling up just as the holidays approach, with 1.2 million retail jobs open in August this year, compared to 734,000 a year ago. But retailers are falling behind, hiring 911,000 in August this year, compared to 922,000 last year.

Retail workers’ willingness to quit helps explain why hiring has been short of expectations in the last two months.

Employers didn’t fill as many jobs as expected during August or September, despite the end of many unemployment benefits and the beginning of school, as 721K workers picked up and left in the month of August. 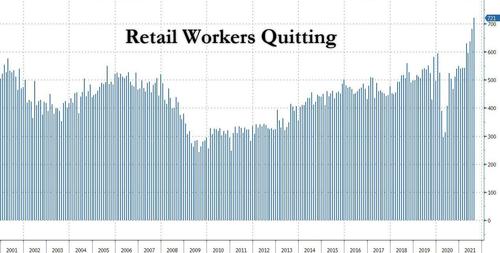 “The end of emergency unemployment insurance and kids returning to campus this September was not the silver bullet for the jobs recovery many hoped for,” Wells Fargo’s Sarah House and Michael Pugliese said.

The situation is leading retailers to sweeten their job offers as they prep for the holidays, and many plan to hire workers to stay on beyond the season, according to a report from outplacement firm Challenger, Gray & Christmas. Employers are increasingly working to address burnout, raise wages, offer perks like child care and family support, and provide avenues for career advancement, according to Andrew Challenger, the firm’s senior vice president.

“While job cuts are at record lows, hiring announcements exploded in September, a month when many big box retailers, shipping, and warehousing companies announce seasonal hiring plans,” Challenger said in a statement. “This year, many hiring announcements are for permanent workers rather than seasonal ones.”

What Supply Chain Crisis? Transportation Secretary Pete Buttigieg Has Been on Paid Paternity Leave Since August

No need for retail employees this Christmas season, as there is nothing on the shelves to sell.

Things are going to be real ugly this holiday season. In more ways than just this. Pink slips will be handed out gratuitously in the coming months thanks to the mandates.

I think the end is in sight for brick and mortar retail stores. I can see a future where Huge stores will display merchandise of all kinds which can be ordered at a kiosk in the store and then shipped from a central warehouse miles and miles away. There will be very few employees in the store and those that are there will be primarily support staff for the ordering portals.

“...a measure of workers’ willingness or ability to leave jobs”
Interesting interpretation of ‘vax or your fired’ and ‘you’ll be paid more in unemployment than you earned at your retail job’.

“I think the end is in sight for brick and mortar retail stores.”

Haven’t been in a retail store, except for food/groceries, for many years. Why go?

Had been catalog shopping, and now online shopping.
Get what I want, delivered to my door, easy returns policies, for less money.

The brick & mortar Retail Store is a thing of the past.
It’s simply too expensive in today’s world of business.

Louis Rossman has been doing devastating reports from NYC on the empty buildings and the ridiculous rents.

It’s relatively the same for every business area across the country.

“Haven’t been in a retail store, except for food/groceries, for many years. Why go?”

I go to Lowe’s near me in the Spring to pick up new plants and planting soil. Some stuff it doesn’t pay to buy on line.

11 posted on 10/15/2021 2:00:21 PM PDT by billyboy15
[ Post Reply | Private Reply | To 10 | View Replies]
To: blam
Stopped at Valvoline. From what I can understand, they can't hire people to go down in the pit and change oil for $18/hour. Double the usual time to get anything done. They had plenty of people standing around the cars at $14/hour and up (up means you need to be "assistant manager"). AFAICT the assistant managers don't do anything except jabber with customers. Mine was pleasant enough but he was needed in the pit and then they should hire a chick to jabber.
12 posted on 10/15/2021 2:04:21 PM PDT by palmer (Democracy Dies Six Ways from Sunday)
[ Post Reply | Private Reply | To 1 | View Replies]
To: rigelkentaurus

No need for retail employees this Christmas season, as there is nothing on the shelves to sell.

—
No thanks to California’s mandate that all trucks on the docks must meet their environmental standard - which means only trucks made in the last 3 years can haul containers away.

I worked retail management for a couple of years and it opened my eyes to how many people are just f’ing aholes.

I wouldn’t want to be in a job that interfaces with the public right now.

People are plain nasty. Nasty because they are under the thumb of the government and they don’t like it and are in a generally bad mood all of the time.

As my wife puts it, “it was like morgue today at the supermarket.”

millions work for something to do and a few extra bucks. giv’m grief...and they’re outa there.

The mandates will finish off the job.

Are these people crazy. A one time disease with a 99% survival rate.

From the first hand on site employee......

The woman was promoted to supervisor of premises services in a prominent box store in a dark blue liberal state university town. (not Walmart)

All the maintenance and janitorial work is by contractors. In her new job many of the contract workers do not speak English and were flown from the released migrant camps in Texas.

There must be a cure that exterminates the Biden plague destroying America Turning a red state blue with illegal aliens should be punishable by extermination. There is no law.

MANDATES AND MORE MANDATES AND THESE IDIOTS CAN’T FIGURE THAT OUT. PEOPLE CAN AND WILL WALK AWAY, YOU CAN’T MAKE THEM DO ANYTHING!

Commercial real estate is declining and will accelerate.