Labeling The Founding Documents ‘Offensive’ Is Just The Beginning Of The National Archives’ Spiteful Plans
The Federalist ^ | September 16, 2021 | Justin Haskins 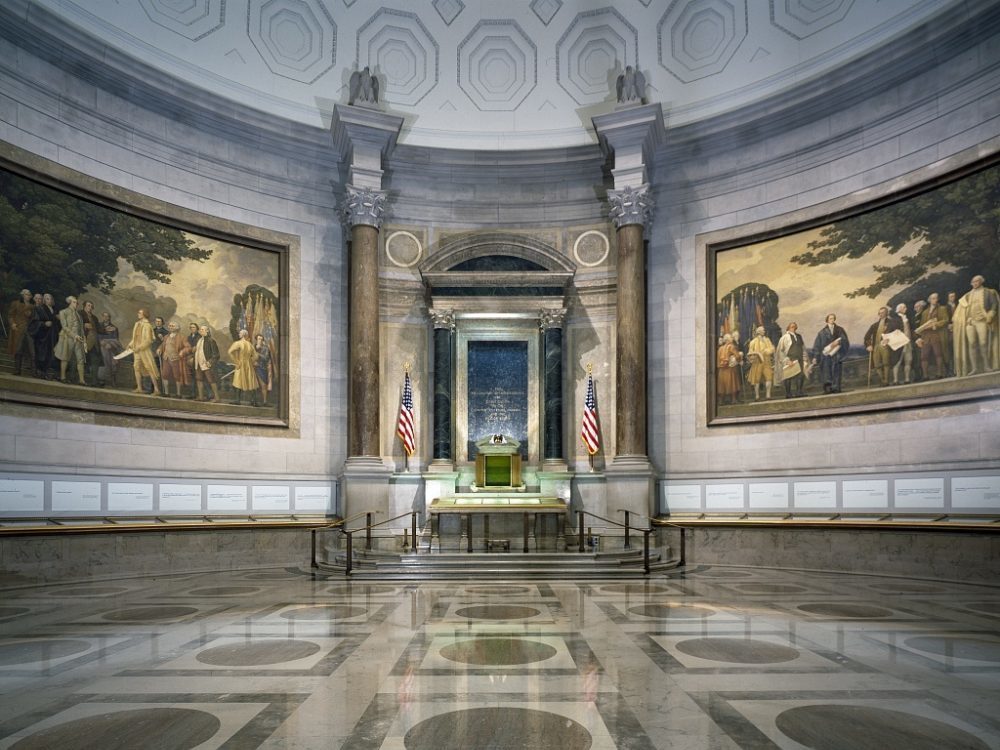 By rewriting America’s history and 'recontextualizing' her founding documents, Biden’s National Archives is seeking to undermine our country's founders.

Words matter, and few words have mattered more in the history of the United States than those contained within the U.S. Constitution, Bill of Rights, Declaration of Independence, and other founding-era documents stewarded by the National Archives.

Protecting and celebrating the most important works in U.S. history isn’t only important because the Constitution and Bill of Rights, as well as other documents in the National Archives, are still legally binding, but also because they tell a story of who we are as a nation and what it means to be American. Today leftists, including many officials in the Biden administration, are actively working to rewrite that story, and to undermine every part of America’s exceptional past.

Trigger Warnings On the Constitution

One notable example is the National Archives’ decision to post a “Harmful Language Alert” banner above documents in its digital archives, including the Constitution and Declaration of Independence. According to the Archives’ warning, its documents include many “outdated, biased, offensive, and possibly violent views and opinions,” as well as documents that “reflect racist, sexist, ableist, misogynistic/misogynoir, and xenophobic opinions and attitudes.”

Since the National Archives contains more than 100 million records, there are bound to be some that are offensive. But rather than identify prominent documents that are indeed offensive as such, the Archives chose to issue a “Harmful Language” warning across the board, knowing full well the documents read most often on its website and in its halls are founding-era materials like the Constitution.

You might be tempted to chalk up the Archives’ warning label to pure laziness. Being woke and accurate is hard when you’re in charge of maintaining millions of records, I’m sure. But it’s worth noting that the warning label emerged from the National Archives’ radical Task Force on Racism, which has developed dozens of other plans meant to give the impression that America’s history is full of racism, hatred, and violence, rather than highlight the nation’s incredible achievements.

In a 105-page report issued by the task force in April 2021, the National Archives suggested it, like the United States, is full of “structural racism,” including “a Rotunda in our flagship building that lauds wealthy White men in the nation’s founding while marginalizing BIPOC [black, indigenous, people of color], women, and other communities.” Since the report’s release in April, Archivist of the United States David Ferriero has “accepted the recommendations in full.”

The report further stated other examples of structural racism at the Archives are “legacy descriptions that use racial slurs and harmful language to describe BIPOC communities.” According to the task force, the Archives must revise these descriptions as part of a long-term program to transform its exhibits, archival information and descriptions, and policies.

Alongside obviously offensive language, the report included many harmless or historically accurate “slurs” to be purged or “recontextualized,” such as “crippled,” “elderly,” “handicapped,” “slave,” and “Eskimo.” Following the recommendations of the report, descriptions will be altered to remove not only overtly racist language but also “information that implies and reinforces damaging stereotypes of BIPOC individuals and communities while valorizing and protecting White people.”

The Archives further says its website and catalog must be changed because their descriptions “over-describe the records and achievements of White men by using more extensive, superlative, and subjective language.”

Additionally, the Archives will transform its famous Rotunda to “create a more inclusive and historically accurate tribute to the nation’s founding.” Its “Reimagine the Rotunda” plan includes “contemporary views on the men who framed the founding documents and their participation in and positions on slavery,” new sculptures, and a “recontextualizing” of the murals now in the Rotunda.

The report also suggested new, intense diversity training courses for its employees. Although it isn’t clear exactly what those training courses may entail, a look at the task force report’s glossary reveals some of what National Archives employees could experience in the near future.

For example, the task force defines “White Privilege” as “The unquestioned and unearned set of advantages, entitlements, benefits, and choices bestowed on people solely because they are White.”

Even more disturbingly, the Archives says “White Supremacy Culture” is the “dominant, unquestioned standards of behavior and ways of functioning embodied by the vast majority of institutions in the United States. These standards may be seen as mainstream, dominant cultural practices; they have evolved from the United States’ history of white supremacy.”

By rewriting America’s history and “recontextualizing” her founding documents and the people who created them, Joe Biden’s National Archives is seeking to undermine the founders of our country and the values they fought — and in some cases, died — to establish and defend.

This is vitally important, because if America’s founding, Constitution, Bill of Rights, and Declaration of Independence become nothing more than additional examples of “structural racism” and “white supremacy culture,” then why should we protect them today? Why should we care about the “rights” they allegedly aim to protect?

This, not racial justice, seems to be the real reason for the Biden administration’s efforts. We can and should honor the legacies of black Americans, women, and all other groups of Americans, as well as recognize that in the past, some groups were horribly abused and mistreated — often by government.

But rather than see the civil rights advancements of the last two centuries as an extension of the principles of the founding era, the Biden administration, including the National Archives, is obsessed with demonizing our nation and “recontextualizing” seemingly every positive event in history as further proof of structural racism or other forms of bias. Furthermore, they often ignore that many of the Founding Fathers — including some Southern slaveholders — happily believed their efforts would someday result in the liberation of all people.

The founding of the United States wasn’t only the creation of a new country, it was the expression of a radical idea that has inspired the birth of countless freedom movements around the world: that all people are endowed with inalienable rights granted not by government, but by a higher power.

The National Archives Is Destroying Its One Job

The United States has never been and will never be a perfect place, because it is composed of imperfect people. But the ideals that have served as the foundation of the American way, ideals that are clearly articulated in documents like the Constitution, Bill of Rights, and Declaration of Independence, are about as perfect as mankind has ever devised.

Instead of trying to undermine American values, the leaders of the National Archives should fulfill their agency’s mission of promoting them — and the people who worked and suffered to create the greatest country the world has ever known. If they fail to do so, Congress should demand the president find new leaders who will.

The West is being destroyed and no one will protect her.

Hard to believe this was once the strongest nation the world had ever seen.

We are fighting - but currently the communists have the upper hand.

The United States of America is a mighty 250 year old oak tree in the forest...

...waiting for the next storm that will blow it over, and reveal that it was rotten and hollowed out from the inside.

Huh? These are supposed to be "slurs"? Some weirdos who work at the archives have unilaterally deemed these words "slurs". Who gave them the power to redefine the English language? The Archive should be required by law only to safeguard our founding documents, not "interpret" them.

We are way past the point where reason will work with these people. They need to be removed from their positions.

May BIPOC meet the same fate as Tupac.

The United States of America is a mighty 250 year old oak tree in the forest...

...waiting for the next storm that will blow it over, and reveal that it was rotten and hollowed out from the inside.

Reminds me of a quote out of “Atlas Shrugged”...

“The great oak tree had stood on a hill over the Hudson, in a lonely spot on the Taggart estate. Eddie Willers, aged seven, liked to come and look at that tree. It had stood there for hundreds of years, and he thought it would always stand there. Its roots clutched the hill like a fist with fingers sunk into the soil, and he thought that if a giant were to seize it by the top, he would not be able to uproot it, but would swing the hill and the whole of the earth with it, like a ball at the end of a string. He felt safe in the oak tree’s presence; it was a thing that nothing could change or threaten; it was his greatest symbol of strength.

One night, lightning struck the oak tree. Eddie saw it next morning. It lay broken in half, and he looked into its trunk as into the mouth of a black tunnel. The trunk was only an empty shell; its heart had rotted away long ago; there was nothing inside-just a thin gray dust that was being dispersed by the whim of the faintest wind. The living power had gone, and the shape it left had not been able to stand without it.”

Ayn Rand and George Orwell would not be proud of the society we have now. But they would have no trouble recognizing it.

Sounds like some of the leadership & management at The National Archives need to be archived permanently.

Lots of freepers are triggered every time I state that the children of foreigners are foreigners themselves, even if born here and NOT natural born citizens.

Since the National Archives are built upon this nation’s founding, they just made the case to fire all the staff return the archives to the people.

If the Founding Documents offend you, leave.

WARNING!!! if these documents offend you, you are OBVIOUSLY in the wrong country and planes leave every hour, a seat can be arranged.

Is the Chief Customer Experience Officer responsible for this idiocy?