According to a new poll from CBS News, most Americans no longer think Joe Biden is competent, focused, or effective as president.

A CBS News/YouGov poll finds that Americans no longer believe Biden to be competent, focused, or effective as president. pic.twitter.com/bUa5hcxWWd

As you can see above, his new numbers represent a sharp decline since April. Biden was asked about the poll on Sunday, and his response was… well… unimpressive.

“A new poll, out today shows Americans wanted to withdraw from Afghanistan, but they disapprove of the way you’ve handled it,” the reporter began. “The poll also found that based in part on what transpired over the last week, a majority of Americans — and forgive me, I’m just the messenger — no longer consider you to be competent, focused, or effective at the job.”

“I haven’t seen that poll,” Biden said, clearly hoping to dismiss it.

In response to Biden’s comment that he hadn’t seen the poll, the reporter assured him, “It’s out there, from CBS this morning.”

Joe Biden laughs when confronted on Americans disapproving of his botched withdrawal from Afghanistan pic.twitter.com/heuROvDhhi

The reporter, still hoping to get a legitimate response, asked, “What would you say to those Americans who no longer believe that you are doing the job?” 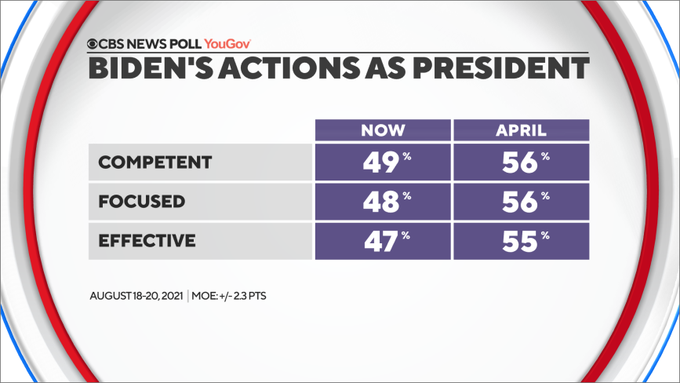 He was laughing surely because he was thinking, “Yea? What are you going to do about it?”

Wonder if it was +20 Democrat polling.

What card is he talking about carrying around every day?

The “My name is Joe. If found, please return to 1600 Pennsylvania Avenue” ?

Definitely. He just doesn’t give a flip what ‘the public’ thinks about anything. The whole family is like that.

I’m afraid he has a basis for gloating...

The only peaceful ways to take him out of his office are:

1) Impeachment and conviction ( but for what?)

2) Invocation of the 25th amendment

3) Wait till his current term finishes and vote him out.

Other than that, we don’t have any other peaceful way. We’re stuck with him and will have to suffer his incompetence for 3 1/2 years.

There’s another way. If the Republicucks grow a set and call for resignation in unison.

Somebody supported this stupid son of a bitch Biden.

He’s not the problem. He’s a puppet figurehead.

He leaves and GOP takes the puppet position, problem persists.

We have institutiuonal rot that is beyond POTUS power to fix.

It’ll crash down in due course.

Well, at least he didn't cackle like Hyena Harris would have.

I still remember when he kicked Paul Ryan’s ass in the VP debate years ago. Did it by laughing the whole time.

He sat in his basement and won a national election...he could care less about the “public” at this point.

He has the CIA/DOJ/FBI the media/university complex & close to 50% of the voters & enough people in place to stuff strategic ballot boxes in several states in case he & his party need it.

If Biden laughs then Kammy will find it unbearably humorous and burst into five minutes of breathless hysterics.

Of course she does that if someone reads her the daily schedule for meetings and photo-ops, or asks her what she wants on the food menu or says the limo has a flat tire and they’re sending another car. So funny to her.

I could laugh about the fact nearly half of Americans somehow, some way, for some reason, think Biden is effective, focused or competent. Really????

But I’m too depressed over the fact to find it funny.

Like the iconic photo of Hunter, unshaven, lying in a bathtub with a cigarette dangling from his lips. "Do I look I really give a $#%& what you think?"

I know the photo you refer to.
Not that it matters, seeing as nothing is ever done about anything Hunter does, but I don’t think that is a cigarette he’s smoking.