One of the Biden family’s closest political and legal advisers whose name shows up in Hunter Biden’s laptop computer is on President-elect Joseph R. Biden’s Justice Department transition team.

Alexander S. Mackler, who served as a deputy counsel to Vice President Biden, was a prosecutor in the Delaware U.S. attorney’s office in 2018 about the time the Justice Department opened an inquiry into whether Hunter Biden had cheated on his taxes.

Mr. Mackler told The Washington Times that he did not know about the case when he was a federal prosecutor. “I learned about the investigation through Hunter Biden’s press statement,” he said.

He was referring to a Dec. 9 statement from the president-elect’s son. Hunter Biden said the Delaware U.S. attorney’s office, headed by David C. Weiss, had informed his attorney that he is under criminal investigation. He said he is confident he did nothing wrong.

Press reports, including those by The New York Times and CNN, put the probe’s beginning in 2018.

Mr. Mackler shows up in the trove of Hunter Biden emails contained in a laptop computer that Hunter dropped off at a repair shop in Wilmington, Delaware, in April 2019 and abandoned.

Through his investment and law firms, Hunter Biden received millions of dollars from Russian, Ukrainian and Kazakh oligarchs starting in 2014, when his father was vice president, according to a Sept. 23 report by Senate Republicans.

Yeah no need for a special counsel. /s 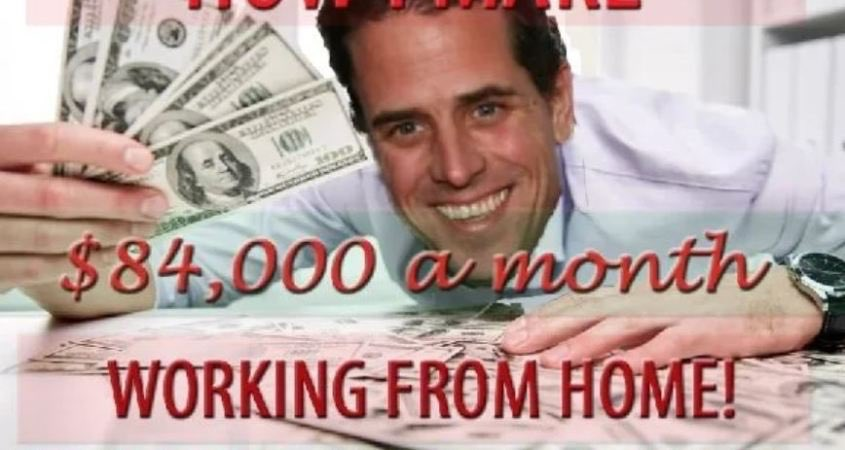 And Hunter never licked even one envelope.

VIDEO: 5m03s: 5 March 2020: Real Clear Investigations: The Biden Family Tree: ‘Drill Down With Peter Schweizer’
Peter Schweizer talks about research from his new book on how the numerous Bidens cashed in while Joe was Vice President.
https://www.realclearinvestigations.com/video/2020/03/05/the_biden_family_tree_drill_down_with_peter_schweizer_122687.html

The Hunter Biden emails — whose authenticity have not been disputed by his attorney — show that Hunter set up a meeting with a Burisma Holdings executive and his father in 2015...

A Senate Republican report last week cited U.S. Treasury reports to show that Hunter Biden received millions of dollars from Burisma, after he won a board of directors seat three months after his dad became White House point man on Ukraine.
Hunter also received a $3.5 million wire transfer in February 2014 from a female Russian oligarch deemed corrupt by the U.S. The former vice president’s son also garnered millions in fees from Chinese billionaire Ye Jianming, since accused of bribery and not seen in public since 2018...

“Hunter Biden and Devon Archer engaged in numerous financial transactions with Chinese nationals who had deep connections to the Communist Chinese government,” said the Senate Republican report spearheaded by Finance Committee Chairman Charles Grassley of Iowa and Homeland Security and Government Affairs Chairman Ron Johnson of Wisconsin.
“The records acquired by the Committees show consistent, significant and extensive financial connections among and between Hunter Biden, James Biden, Sara Biden, Devon Archer, and Chinese nationals connected to the Communist regime and PLA as well as other foreign nationals with questionable backgrounds,” the Senate Republican report concluded...
https://www.washingtontimes.com/news/2020/oct/17/hunter-biden-business-partner-key-role-china-obama/

VIDEO: 29s: 23 Jan 2020: Facebook: White House: Joe Biden: “If the prosecutor is not fired, you’re not getting the money”
Two years ago today, Joe Biden shares how, as Vice President, he threatened to withhold aid to Ukraine unless a prosecutor was fired...
https://m.facebook.com/WhiteHouse/videos/joe-biden-if-the-prosecutor-is-not-fired-youre-not-getting-the-money/797504800724150/

1 Jan: Boston Herald: Press needs to turn up heat on Biden family China deal
by Peter Lucas
Mr. Biden, did you ever meet with Tony Bobulinski?
That is a simple question reporters could ask incoming President Joe Biden the next time he holds an audience.
And that is what his rare and scripted meetings with reporters are — audiences, not press conferences.
Reporters are kept at a distance and are nothing more than willing props who, in unspoken agreement, do not ask probing questions, but run with the pap they are fed...
https://www.bostonherald.com/2021/01/01/press-needs-to-turn-up-heat-on-biden-family-china-deal/

Biden is going to put the worst, nastiest crooks he knows in the highest positions in the government.

The worst nastiest crook in the highest positions in the government. is going to be Joe Biden.

...and the Uniparty senate will approved them on a voice vote.

Where could you find a better man?

Of course a Hunter associate would be on the transition team. After all Hunter is the smartest person Joseph Biden knows.

The new pictures from Hunters laptop are circling the internet.
Horrible pictures.
Hope Trump shows Joey’s smartest man he knows pictures on a telethon at the rally tomorrow night.