People flock to the US - at great expense and over many years of patient waiting, if they do it legally; and others do so illegally, often risking their lives.

None of them come here because the US is just like the sh!tholes that they came from.

As explained and demonstrated in the accompanying redacted declaration of a former electronic intelligence analyst under 305th Military Intelligence with experience gathering SAM missile system electronic intelligence, the Dominion software was accessed by agents acting on behalf of China and Iran in order to monitor and manipulate elections, including the most recent US general election in 2020.

Does this mean that they did find evidence for vote fraud by hostile nations, the smoking gun?

So voting machines do not have to be directly connected to Internet. All they need is to connect to an single laptop which is Internet accessible.

c. We … discovered that at least some jurisdictions were not aware that their systems were online,” said Kevin Skoglund, an independent security consultant who conducted the research with nine others, all of them long-time security professionals and academics with expertise in election security. Vice. August 2019.

The fraud can be perpetrated without people knowing about it.

Hoping it leaves a crater.

I just got done reading the filing. NO mention of any servers confiscated in Germany. Plenty of obvious fraudulent election activities. Enough to swing Ga easily if only half of them are determined valid by the Court.

But special thanks and gratitude to Sidney for her relentless search for the truth and her fortitude in withstanding all of the ridicule and threats to which she has been subjected. She is every bit the hero as those Marines who threw themselves on grenades to save their buddies - and she may have a very large role in saving our Republic.

China and Iran manipulating the elections from within OUR voting machines.

Affidavit on China and Iran

She promised to file yesterday!!!!

This was not a good day for freeper surrender monkeys. So much handwringing and despair was to be spread around today, especially if Powell did not file....oops she did...

Sidney’s lawsuit is disappointingly sloppy. Typos and quite a few sections throughout that are just repeated, like a bad copy/paste job; coherence really falls apart around p. 73 with the Equal Protection argument and gets progressively worse until the end. Good luck understanding her train of thought on Count V (starting p. 86) related to “widespread ballot fraud”...no important points to make there. Sigh.

Luckily, there’s significant overlap with Lin Wood’s (much less sloppy) GA suit. Her suit is obviously more comprehensive as it includes Dominion stuff, which wasn’t all that convincing due to reliance on testimony from only 2-3 people. Definitely an uphill battle to prove that kind of pervasive fraud when you don’t have access to the machines. She does ask for access though.

Wood wants all “defective” absentee ballots thrown out, but doesn’t give a number of how many he thinks that is. Sidney mentions “at least 96,600 votes were illegally counted” (p. 11, p. 65) and then “more than 50,000” (p. 12) illegal absentee ballots were counted and then, on p. 90, says Dominion manipulated up to 136k ballots. It is really unclear where exactly her “experts” are getting these numbers.

Sidney seeks relief in the form of removing all mail-in ballots from the count or disqualification of GA’s electors. A few paragraphs later she says she only wants absentee/mail-in ballots that are out of compliance removed. She then asks for a litany of things starting on p. 100: machines impounded for forensic audit; no votes received on the machines counted; full manual recount with signature verification; security footage; decertification of results; Trump declared the winner...it’s a confusing mess by the end.

SUMMARY of Sidney’s main arguments and other juicy bits for those uninterested in grinding through the whole, painful thing:
1) Settlement agreement entered into between SOS and Democratic Party violates GA election law, leading directly to counting illegal absentee ballots (for various reasons - no ID, no signature verification, no corresponding envelopes, no process for election clerk checking in ballots, opening absentee ballots three weeks early, letting ballots be cured). Violation of US Electors and Elections Clauses.
2) Meaningful access to election pre-canvass and audit not provided to GOP in dem-majority counties.
3) When GOP access was briefly provided on Election Day, election workers were observed not following statutes related to voters canceling mail-in ballots in order to vote in person and provisional voting when voters claimed they did not submit a mail-in ballot yet somehow the county incorrectly had one on file as returned.
4) “Hand” recount didn’t actually happen by hand in many places; same ballots just fed into the same machines with no hand verification of anything, specifically signatures or piles of pristine ballots (98% for Biden).
5) Chain of custody for voting machines breached, specifically signing for the machines before they were actually delivered; when machines arrived, they were not sealed or locked and had mismatched serial numbers.
6) Fraud appeared in large pattern that cannot be denied or reasonably classified as a mistake (starts on p. 32 - worth reading this section, good testimony and stuff about watermarks on p. 35).
7) Machines and software should be immediately impounded and inspected as violations are common in content and statewide in scope. All ballots are scanned so can be tracked both live and later on, however, scanned images tagged as “problematic” can also be easily deleted. Very easy to set the machine to mark ballots problematic for later deletion individually or as a batch. No paper back-ups exist to verify machine results, making recounts meaningless. Tidbit: Stacy Abrams voting “rights” group was highly critical of adopting Dominion machines because they can be hacked.
8) SOS and others broke federal law by failing to retain election records (and deposit them with custodian); law says they must be retained for 22 months.
9) Expert witness says machines and software specifically created to rig elections. This was primary purpose in using them in Venezuela. Chavez never lost another election.
10) Smartmatic has foreign inventors, incorporators, and offices; as such, presence in US must be approved by CFIUS, an entity created via amendment to Defense Production Act. (This might be the thing that lets Trump activate that EO/emergency declaration for foreign actors??) It was approved by CFIUS, despite being a known threat and risk to critical infrastructure, to which Rep. Carolyn Maloney objected in 2006.
11) Long list of Dominion/Smartmatic vulnerabilities p. 48 - 52. Evidence of remote access to machines poses an extreme security risk according to expert testimony. Observed removal of USB drives containing vote tallies demonstrates lack of physical security of machines.
12) House bill passed in 2019 stipulates paper ballots required and must be made available for review by voter before casting vote; voting systems must be manufactured in the US; and voting systems cannot be connected to the internet. Dominion satisfies none of this.
13) Water leak allegedly at absentee counting center that required delaying the count for a few days was actually an overflowing toilet and nowhere near the ballot counting. People still stayed through the night working on the computers after everyone else told to go home.
14) Dominion VP of engineering is part of ANTIFA. Tweets and recordings depict his calls for violence against Trump as well as statement that Biden will win because he/Dominion fixed the election.
15) Anomalies in GA election are too pervasive and egregious to certify vote. Hundreds of thousands of votes were lost or shifted, costing Trump and GOP candidates in Districts 6 and 7 their races.
16) Matt Braynard’s research is cited: at least 31k mail-in ballots were never counted; at least 17k ballots were sent but never requested (potentially disenfranchising as many legal voters); roughly 20k absentee or early voters voted while being listed on national change of address database as living outside GA; and patterns of registrations from totally fraudulent addresses. All of these things far exceed the ~13k votes Biden “won” GA by.
17) Biden votes in 2020 are more than he got in 2016 by a margin greater than the additional registrations since 2016. This is a mathematical anomaly.
18) Results of Nov 3 election “infected” (I like this usage!) with Constitutional violations and must be set aside.
19) Equal Protection/14A violated via withholding meaningful access to election observers in all counties (some counties were fine), not allowing watchers to routinely see envelopes, for allowing uncertified Dominion machines to operate in certain areas; and differing curing procedures across counties (also created out of thin air by SOS). Election was not conducted uniformly for many reasons.
20) Requests that ballots be invalidated that are not signature matched with envelope and registration; are from dead people; and were military votes in Fulton County that went 100% for Biden (900 votes).
21) Due Process violated because signatures were not matched, thus potentially diluting weight of legal votes. Interesting stats on GA’s rate of signature rejection relative to states with long-standing vote-by-mail systems that do check signatures on p. 85-86.
22) Known and reported “glitches” with Dominion system uniformly hurt Trump and helped Biden; no logs were kept to facilitate audit, despite GA election law; and tens of thousands of ballots were mailed that were never requested or were cast by voters who had moved, with many more fraudulent ballots cast without detection, all indicating widespread fraud.

Honestly, much of this felt like word vomit and, at best, a very rough draft. There is a lot of compelling content here, but its “punch” is severely undermined by tremendously poor organization. With all of their thoughts, case law, and testimony down on paper, they needed to print it out, cut every paragraph into a slice, and properly sequence the slices. Things definitely could have been consolidated. I really hope the judge(s) reading this aren’t sent into a fit of rage at repeated (verbatim) sentences and paragraphs. For the stuff that isn’t identically replicated, the ideas are certainly redundant, which also got frustrating. I realize legal writing is its own awful thing, but this is bad even by those standards.

Help us, Obie wan, you’re our only hope. 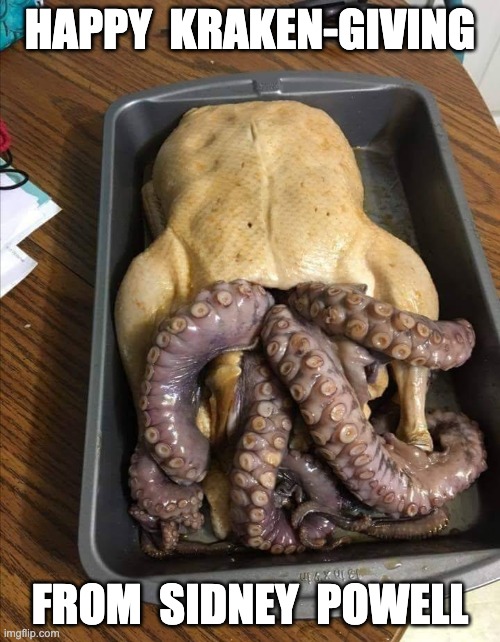 Re “It’s not a good idea to talk politics at Thanksgiving dinner - unless YOU ARE THE ONE HOLDING THE LARGE CARVING KNIFE”!!!

If your a Deep South White Christian like me

Common culture and beliefs since hey.....Jamestown...lol

May truth and justice prevail.

Keep praying, everyone. Every day, every hour.

People can talk about that any other time of day or night. don’t ruin Thanksgiving dinner because there is no possible way one side is going to say “oh I was wrong”

It’s the best time to talk about politics and religion too.