For nearly three years, there have been reports and rumors of millions of dollars being spent at Guantanamo Bay Naval Station (aka "Gitmo") to receive new U.S. prisoners -- tried in military courts under the UCMJ.

During that time, the current Detention Area (at lower right [east], above) has been under regular "OHI" (OverHead Imagery) surveilllance. Despite debunked false propaganda, the last visible Detention Area change was in 2011 -- when an exercise yard was added.

But, recently, surveillance has detected construction activity at the far left [west] end of the military property --just northwest of the currently-active airfield. 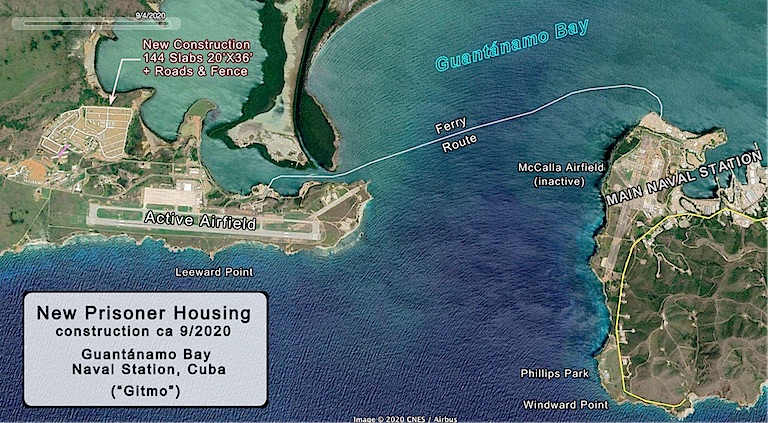 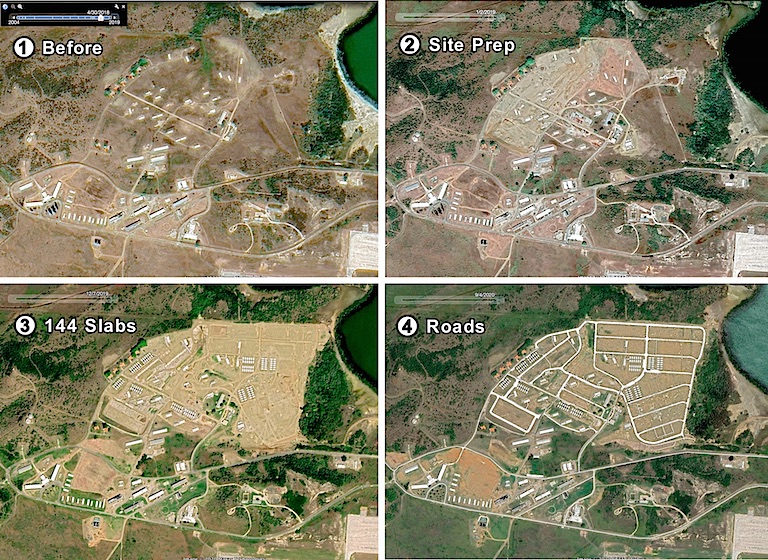 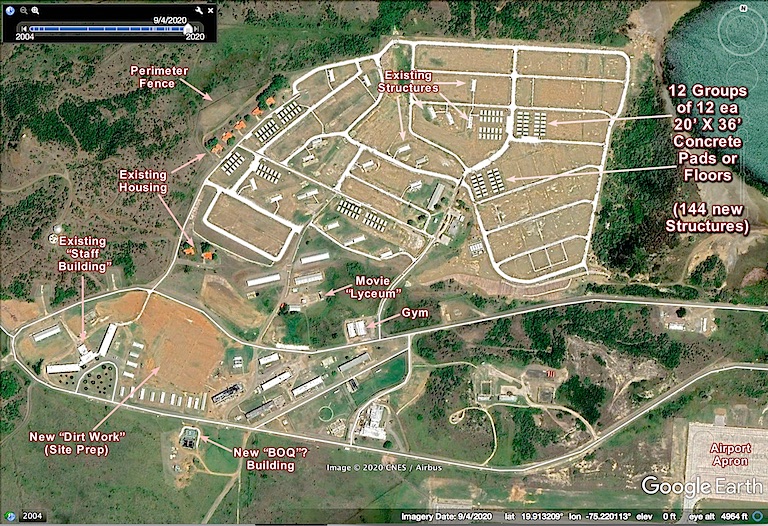 The site appears to be laid out to accommodate several hundred more such structures.

BUT -- One 20' X 36' slab floor will support a tent or pre-fab structure that can accommodate two prisoners luxuriously or four prisoners in jail-sized quarters.

That means the 144 slabs already poured can accommodate 288 or 576 prisoners readily.

That's enough traitors to begin to put a good dent in the Deep State!

Send the Bidens and Clintons there... to start.

Lots of donk deep staters need a place to be sent

Hold a room for HUNTER!

Or this is a construction of the deep state to put people who won’t go along with the coup they have planned.

If a dem wins this election, they will most likely try to send every Republican there.
Didn’t someone say the Republicans are going to pay!

If anyone believes Americans are going to be imprisoned at GITMO for domestic crimes, please contact me ASAP. I have more bridges than I need and want to offer someone a great bargain. Vintage, but excellent condition! Prime location in Brooklyn! 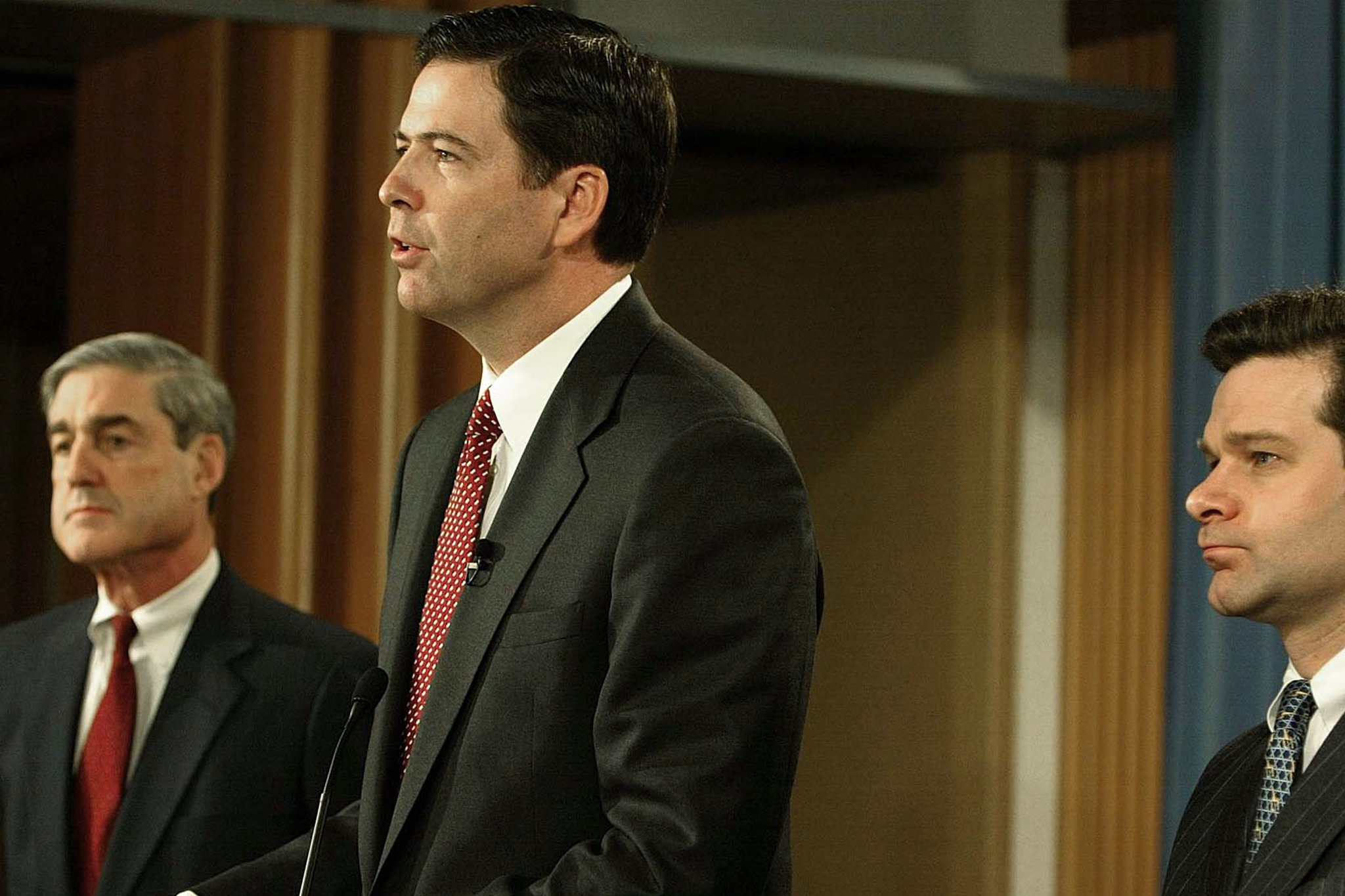 We might have to annex the next closest island to house all the traitors and accomplices.

Good start the next flight out schedule from the Pacific Northwest.

16 posted on 10/18/2020 10:59:47 PM PDT by jocon307 (Dem party delenda est!)
[ Post Reply | Private Reply | To 1 | View Replies]
To: ETCM
If anyone believes Americans are going to be imprisoned at GITMO for domestic crimes, please contact me ASAP. I have more bridges than I need and want to offer someone a great bargain. Vintage, but excellent condition! Prime location in Brooklyn!

I would like to have the FBI building in D.C. converted to a prison and have it reserved for government criminals. Everyone working in the city will see that building there waiting for them as they drive by.

Add Pelousy, the Obamas and Valerie Jackass to the Gitmo crew. And another area for Soros, Fauci, Gates and the rest of the globalists. Throw the imposter pope in there too.

Good lots of domestic terrorists in Seattle and Portland who should probably be spending some time their to think about what they have done and if they will cooperate in naming their fellow terrorists.

Then again, there was this attempted coup against the US President.

If it has to be in the US, then Some place very far north in Alaska. While Fairbanks is a large city, Nome might be more remote and appropriate. There is nothing like months of almost pure darkness and 20 to 40 below zero outside temperatures to cause serious depression. Make sure they get at least 30 minutes a day outside exercise time.