A series of forums on race offered at Sandia National Laboratories left at least one lab employee miffed enough to send an email blast to the entire staff voicing his displeasure.

And the upset electrical engineer appears to have caught the attention of the White House, which last week in a memo told all federal agencies to stop hosting similar training sessions.

Last month, Casey Petersen, an engineer, sent an “unauthorized” email to all lab employees denying the existence of systemic racism and aspects of white privilege and criticizing recent race-based training seminars at the labs.

About two hours later, Sandia National Laboratories responded with a “Special Announcement” telling its employees the email wasn’t an official communication and not to open or view it.

Petersen was placed on paid administrative leave shortly after he sent the email. He has since returned to work on an “uncleared” status, which means he doesn’t have access to classified information. And he is the subject of an ethics investigation.

The White House Office of Management and Budget on Sept. 4 issued a memo that referred to some of those press reports. The memo said federal agencies have spent taxpayer money to put on trainings that were “divisive, anti-American propaganda.”

The memo directed agencies to identify and cancel contracts that bring racial sensitivity training that includes teaching critical race theory and white privilege at federal facilities, according to the memo.

Critical race theory is, among other things, a view that laws and institutions are inherently discriminatory against people of color.

TOPICS: Crime/Corruption; Culture/Society; Government; US: New Mexico
KEYWORDS: bidenvoters; diversity; newmexico; sandia Navigation: use the links below to view more comments.
first 1-20, 21-40, 41-54 next last
If Biden/Harris are elected I can see an executive order directing the all government agencies and all institutions receiving federal money (etc. schools/colleges) offer such training and making it mandatory for all to attend. Sort of like Chinese re-education camps for Americans.
1 posted on 09/15/2020 4:17:03 PM PDT by CedarDave
[ Post Reply | Private Reply | View Replies]
To: LegendHasIt; leapfrog0202; Santa Fe_Conservative; DesertDreamer; OneWingedShark; CougarGA7; ...

No one ever taught me to be white. Do the other races really need training?

Im pretty sure it was Tucker who got the ear of the President on this one.

The head of Sandia needs to be fired and Casey Peterson promoted to head honcho.

the seditionist that removed the WHISTLEBLOWER
should be fired immediately along with his supporters
and protectors.

and seditionists and TRAITORS at Sandia should be
hung.

I regard this as a hostile work environment, being subjected to it.

Interestingly enough, the minorities who have major axes to grind come out pretty quickly. There’s one dope on my team who always references “slavery” on these discussions (IE lectures).

I attended a few of these mandatory “training” sessions while working at a large defense agency in St Louis. I learned to keep my mouth shut. There is no upside to saying anything. They always state that the training has a non-attribution policy. That is not true. If you challenge anything in the course your bosses will hear about it.

And this is how government will come after you and I. Leftists ultimately wang us all dead, not just have us lose clearances.

So how many of the Obama administration deep state folks still have top security clearances?

The whistleblower at Sandia is one brave person.

These ridiculous classes are usually mandatory for employees. The last one I had to endure was 12 years ago. I can imagine how much worse they are today.

These ridiculous classes are usually mandatory for employees. The last one I had to endure was 12 years ago. I can imagine how much worse they are today.

Wait. I thought whistleblowers were protected?

Oh, only if they’re blowing the whistle against Trump/conservatives, right? 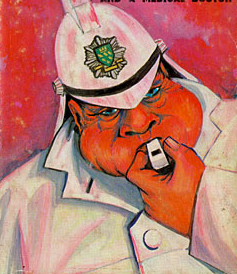 The people at Sandia literally are nuclear scientists. What possible use do they have for this kind of propaganda?

The tentacles of this go back a loooonnnnggg way. I had to take a diversity training class in Tech training for the Air Force way back in 1982. Granted it wasn’t as pc as it was now but it’s roots were in the notion whites are racist by default. The instructor was a real dick too.

Impatiently waiting for action!
WTF is going on in the WH?
When are heads going to roll...or woodchippers get fired up??