Well, here we have it: one of the faces of the new Democrats — young, diverse, leftist, a heavily promoted contributor to Teen Vogue — and as sadistic as former Weather terrorist Bernardine Dohrn, who oozed thrill in the 1969 Manson murders.

The media must require all democrats to respond to this. I cannot believe she is getting away with this.

Unfortunately that person will win overwhelming...sad and infuriating! I wish I could moved to Alaska..seem as of now that’s the area to go! You and the Carabel only! 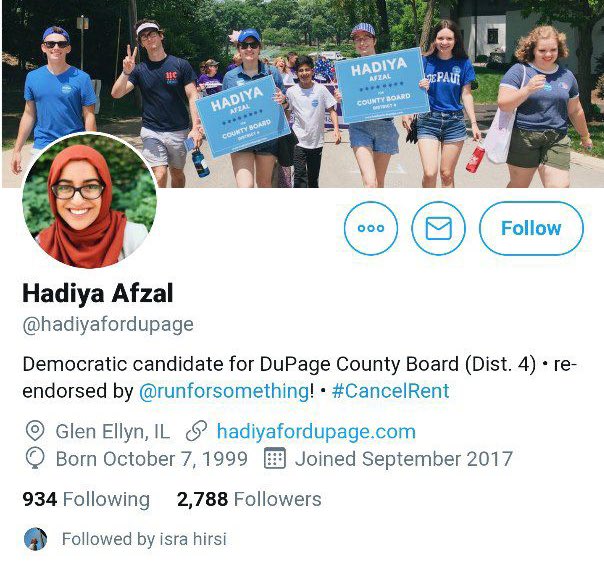 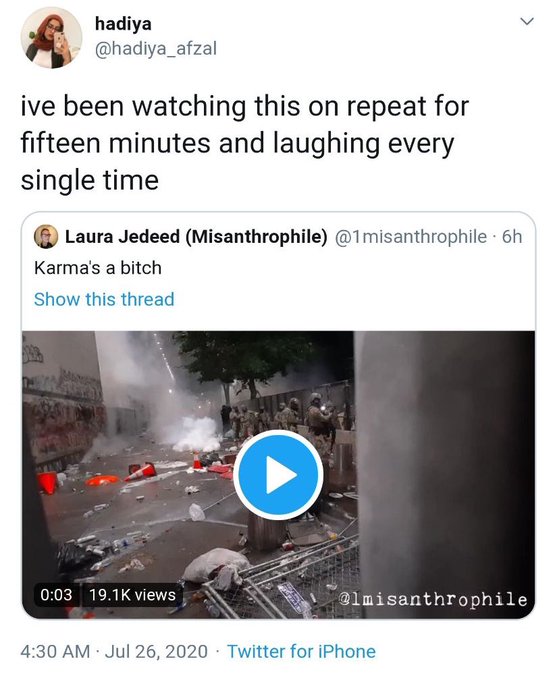 She’s withdrawn from the middle race.

I thought you were talking about Clarabel...

I represented the voters in a neighboring district to the one she lives in.

No way she could win, as her District 4 is a well-to-do, well-educated, heavily-conservative GOP county district. But her attempt, though aborted, is just a sign of things to come.

A number of years ago, a House district adjoining mine unexpectedly flipped over from reliable GOP to Democrat.

The result was radical Democrat Tammy Duckworth winning a House seat formerly held by a good friend of mine, the late, great GOP Henry Hyde (noted for the famous "Hyde Amendment" pro-life bill).....and then Duckworth went from the House to run for a US senator from Illinois, and she won..and she is still a member of that august body.

And I bet she'll be back again, running for some office or other.

These leftist people don't become discouraged, ever, ever.......and like a virus, they return again and again to achieve their destructive goals of socialism and marxism.


What the in name only Democratic Party has been doing in gerrymandering remapping has been singling out areas of various districts where it is dominated by a minority and create a single district out of it which not only disrupts those districts affected of getting civic services needs but pits one group against the other. An example of this is in what Chicago did here;

That finger of Chicago’s border on its south side extending from 51st to 65th streets 4 miles further beyond Cicero Avenue to Harlem Avenue has a very interesting history. Post WWII during the 1950’s and 60’s the area mushroomed into dozens of single dwelling subdivions where thousands of of five and more room single 1 family units were built. After a struggle by residents including this writer the area managed to get the area remapped into one ward (23rd) and only one alderman needed to respond to their needs. Today the area has four alderman including the 12th, 13th, and 14th who’s wards are spread miles apart and the reason is political because the area was conservative The same rules apply to state and congressional districts
. http://www.theusmat.com/mdwbea.htm

14 posted on 07/28/2020 10:00:09 AM PDT by mosesdapoet (mosesdapoet aka L.J.Keslin posting here for the record hoping somebody might read and pass around)
[ Post Reply | Private Reply | To 13 | View Replies]
To: mosesdapoet
Yep...you hit it on the nose. Re-districting played a major role in the the late Rep. Henry Hyde's GOP district going Democrat and giving us the radical Tammy Duckworth.

Dems are using re-districting all across the fruited plain as we speak...it's a vital weapon in their plans for future federal, state and local total control.

And, to make matters worse, even our conservative media is paying no attention at all to this insidious Dem strategy.

“And, to make matters worse, even our conservative media is paying no attention at all to this insidious Dem strategy.”

Someone like Tucker Carlson needs to have this issue of redistricting and its insidious use to achieve Dem/Socialist political aims throughout our Country brought to his attention. As Cable TV is still one of the main methods of disseminating information to the public, and stations (with the exception of one half only of now Murdoch brothers owned and run with considerable more liberal influence programming) it is very hard for conservative viewpoints to be heard. We’ve got Rush still on radio, thank goodness, but even that is now tenuous due to Rush’s health concerns.

We must get a conservative Cable station on TV as a major source of conservative thought. Donald Trump Jr. and allies have been buying up stock in OAN, hopefully towards the end of establishing a major Cable TV station presence. We need an alternative to the constant barrage of liberal media pontification with the purpose of brainwashing viewers to their point of view.