U.S. District Judge Emmet Sullivan, through his counsel Beth Wilkinson, has asked for U.S. Court of Appeals for the District of Columbia Circuit to rehear his case against the immediate dismissal of the Michael Flynn prosecution.

The Thursday petition for rehearing comes after a three-judge panel on the D.C. Circuit granted Flynn’s petition for writ a mandamus on June 24, directing Sullivan to dismiss the case.

“The panel majority granted the extraordinary writ of mandamus to prevent the district court from receiving adversarial briefing and argument on a pending motion. The opinion is couched as a fact-bound ruling based on ‘the record before the district court,'” the Sullivan petition for rehearing began. “It in fact marks a dramatic break from precedent that threatens the orderly administration of justice.”

The three-pronged argument noticeably cited the Supreme Court’s “admonition” in Seila Law LLC v. CFPB, a case that was decided on June 29:

First, the majority undermined this Court’s consistent interpretation of the mandamus standard by forcing the district court to grant a motion it had not yet resolved, based on alleged harms to a party that did not seek mandamus, and in reliance on arguments never presented to the district court. Any one of these rulings would constitute an unwarranted dilution of the requirement that a petitioner lack adequate alternative remedies. Taken together, they threaten to turn mandamus into an ordinary litigation tool.

Second, the panel undercut Supreme Court and Circuit precedent in holding that the separation of powers precluded the district court from inquiring into the government’s Rule 48 motion. The Supreme Court’s decision in Rinaldi v. United States,434 U.S. 22 (1977) (per curiam),recognized a district court’s ability to hear an unopposed Rule 48 motion. Moreover, no Circuit precedent establishes the type of clear and indisputable right necessary to authorize the panel’s resolution of that constitutional question. That is especially so given the Supreme Court’s recent admonition that separation-of-powers questions are fact- and context-specific. See Seila Law LLC v. CFPB, ___ S. Ct. __, slip op. 2, 16–18 (June 29, 2020). Mandamus is not the place to make new law.

Third, the panel contravened Supreme Court and Circuit precedent in precluding the district court from appointing an amicus and scheduling a hearing. The Supreme Court and this Court have employed those practices to resolve cases where the parties agreed and the ultimate outcome was predictable. The panel cited no law precluding district courts from similarly considering both sides of an issue before deciding it. Wilkinson said that the three-judge panel’s decision “threatens to turn ordinary judicial process upside down.”

“It is the district court’s job to consider and rule on pending motions, even ones that seem straightforward. This Court, if called upon, reviews those decisions—it does not preempt them,” the petition said. “This case satisfies the requirements of Rule 35, and en banc review should be granted.”

Flynn’s lawyers have fought tooth and nail against Sullivan’s appointment of an amicus curiae to argue against the Department of Justice’s motion to dismiss. The 2-1 panel decision was a boon for them, but there’s no guarantee the full D.C. Circuit will view the case the same way.

Read the petition in full below:

How long is the Circus Court going to put up with this lawless nitwit?

3 posted on 07/09/2020 1:23:40 PM PDT by TigersEye (Covid is over. We have been conditioned by it. The Cultural Revolution has begun.)
[ Post Reply | Private Reply | To 1 | View Replies]
To: bitt
“The panel majority granted the extraordinary writ of mandamus to prevent the district court from receiving adversarial briefing and argument on a pending motion".

There was NO ADVERSARY. When the judge has to seek out and hire an adversary, one with no standing in the case, then the Judge himself has become the defacto adversary. Next, Judge Sullivan will petition to be Flynn's executioner as well.

There’s no justice with pigs like Sullivan on the bench. If I typed how I really feel about him I’d be banned.

These are the judges who make the laws. By defintion, nothing they do is lawless.

Pretty much the whole of the federal government, all branches, is in open revolution against the people.

MAKE SULLIVAN PAY FOR THE REHEARING OUT OF HIS OWN POCKET INSTEAD OF OUR POCKETS.

The petition claims that the challenged opinion contravenes precedents about when mandamus is proper. The problem is that a district court should not contrive or indulge a process that aims at an end that the Supreme Court has definitively held to be wrong as a matter of law.

The Atty. General of the United States can’t bring this cruel farce to an end? Maybe not the one we have right now.

There’s an amazing amount of bigotry, bullying and intolerance permitted here, though I suppose it’s really mostly at other freepers. :)

And if they decline to support him, he'll ask for the SCOTUS to hear his plea.

And if they decline to support him (which might take years to decide) he can still decline.

Of course by then it will be a moot point, whether or not PDJT wins this November.

I was wondering what happened what J. Sullivan would act.

Doing everything he can to run up the bills for General Flynn.

12 posted on 07/09/2020 1:28:38 PM PDT by Pete from Shawnee Mission
[ Post Reply | Private Reply | To 2 | View Replies]
To: bitt
Any idea what the makeup of the whole panel is? I'll take a look what Sidney Powell has to say about this. What a dirtbag SUllivan is (sorry to insult actual bags of dirt). She hasn't tweeted about it but here's this. Click scribd link to see it all.

Judge Sullivan refuses to give up - and asks the DC Circuit for a rehearing (en banc) on the dismissal of the Flynn case.

Allegation: the DC Circuit granting of mandamus "threatens the orderly administration of justice." 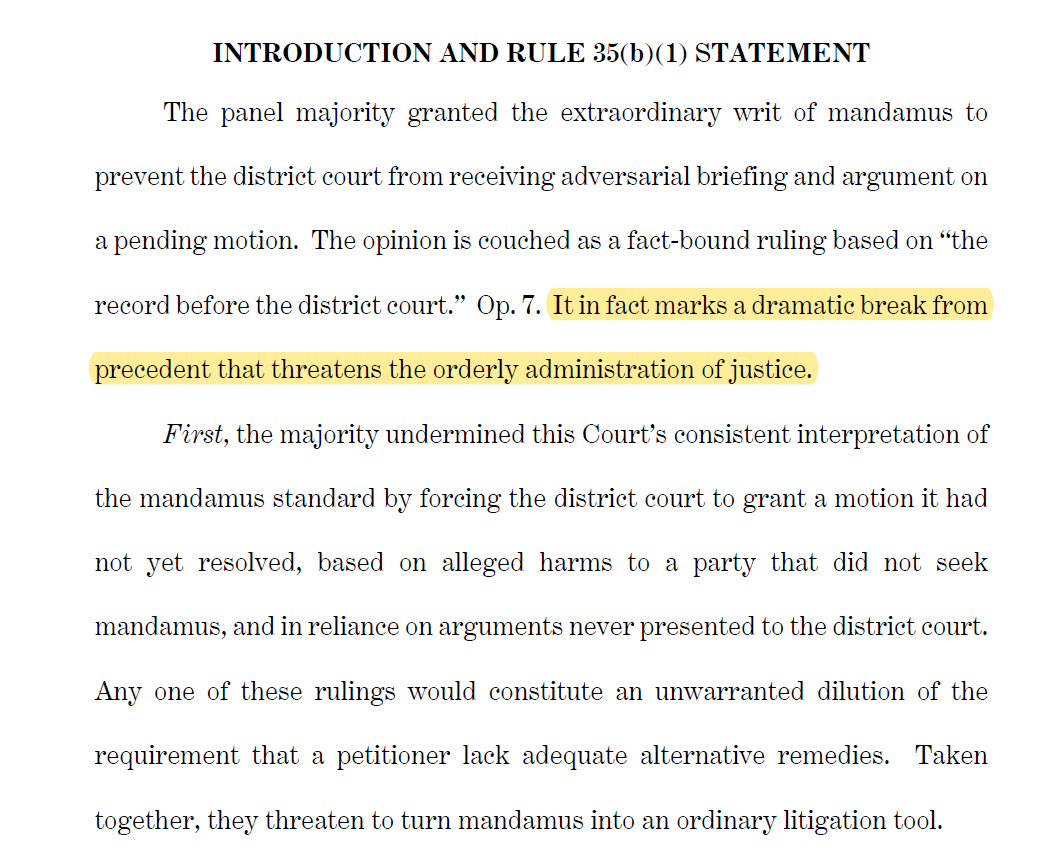 You didn’t need to have Einstein’s IQ to have predicted this move. Likewise for the delay in making the request.

Sullivan’s job is to keep to Flynn off the streets and the campaign trail until after the election. And he is doing an excellent job on that front. But serving justice is clearly not his forte.

I wonder if the Deep State will follow through with his request. I wouldn’t bet against it.

The three independent branches are in cahoot against Trump, for sure, and generally against the people. They only check and balance about which of them will rule without account.

This is being dragged out on purpose.

What possible legal standing does this corrupt judge have? How can he so openly and corruptly continue to harass an American citizen?

The law is whatever the unelected judge says it is.

I believe there is a deadline for a decision to be made to have an en banc hearing. That deadline is 21 days after the original 3 judge panel decision which would make 15 July the date for them to go forward or not. Is that correct or am I in error?