Portrait of an American City at the Dawn of a Pandemic
Townhall.com ^ | March 17, 2020 | Salena Zito 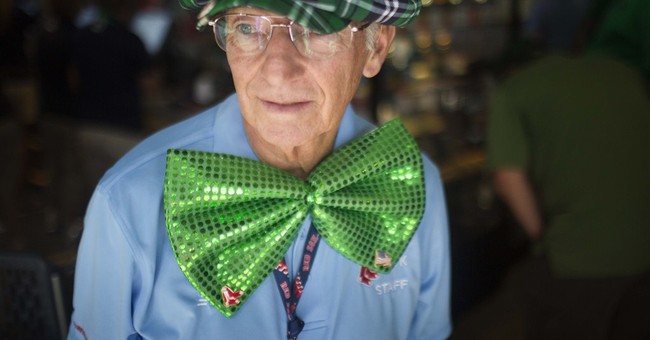 PITTSBURGH -- On Friday, James Coen is folding and unfolding, arranging and rearranging the piles of colorful St. Patrick's Day T-shirts he has displayed on folding tables outside one of the three sports retail stores he owns. The stores are all large historic buildings with big, shiny, planked hardwood floors, all snuggled in a three-block radius between assorted assemblages of late-19th-century buildings along what is affectionately called "The Strip" or "Strip District."

No one calls him by his given name. He is "Jimmy Yinzer," the unofficial mayor of the city and purveyor of all things Pittsburgh. He's mostly known for having the largest inventory of Steelers, Penguins and Pirates items you would need to wear, wave or grill. His stores are all called Yinzers, an affectionate hat tip to the people of the city he loves, whose unique dialect includes referring to a group of people as "yinz."

It is nearing 70 degrees, and there isn't a cloud in the sky. Had it been any other March day in any other year, the nine blocks that make up the Strip District would be so overflowing with people that cars would have a difficult time navigating Penn Avenue to get to their destination, especially just days ahead of Pittsburgh's legendary St. Patrick's Day Parade.

But while the district is not barren, and at times it is bustling, the numbers are still down.

Coen is used to holding court, solving problems and waiting on customers at an exhausting rate. On Friday, he is enjoying a rare lunch at Cafe Raymond across the street from his marquee store, a lunch hour he typically works through. The biggest times of the year in retail for him and the rest of the Strip are football season, Penguins postseason, Pirates opening day, Christmastime and the lead-up to the St. Patrick's Day Parade.

The parade was just canceled.

"Last weekend, I thought we might be able to hold our own through this crisis," he explains. "By Monday of this week, we were down 50% in our business. By the time they canceled the parade Wednesday, I was down 75%."

Those St. Patrick's Day T-shirts that help him make bank every year are now 50% off.

"I have 25 employees," he says. "I looked at my bank account. I am not sure what I can do if this goes on much longer."

Raymond Mikesell, the owner of Cafe Raymond, is watching the cafe dining room from the kitchen counter. The day before, there was nobody eating his legendary food. On Friday, the place was doing much better: "Thursday was the worst," he says. "Every catering job we had scheduled has been canceled all the way through until May. Today is a much-needed improvement. I had people coming in steadily and just said they wanted to support us."

Mikesell tears up. "That is who we are here. We lift each other up, and people kept telling me we are all in this together."

Think of the Strip District as Pittsburgh's continuous tailgate party, with the sounds, smells and sense of singular purpose that goes with that. There are people tossing pizza at Bella Notte; stacking mile-high sandwiches filled with French fries and coleslaw at Primanti's; sipping the finest coffees at La Prima, surrounded by more Italian-speaking patrons than not; and eating Cafe Raymond's famous ricotta pancakes stuffed with oversized blueberries.

There is also live music played at nearly every corner by street musicians, fiddlers, rappers, drummers and that guy who always sings Crosby, Stills & Nash songs a little off-key. The bars vary from charming dives to an authentic Irish pub.

You can buy trinkets, pottery, lavish handmade clothing, jewelry and funky furniture at Hot, Haute, Hot, and antiques from the finest robber barons' homes at Mahla. Or you can pick up ingredients at kosher Chinese, Greek, Polish and Serbian groceries, and at the king of Italian epicureans, Pennsylvania Macaroni Company, filled with whatever you need from the "old country."

Over at La Prima, the regulars can't help themselves. Old and young people are either standing around at the tables or outside.

Over at the Italian grocery, Pennsylvania Macaroni co-owner Rick Sunseri says that because everyone is rushing to the big-name grocery stores and growing weary of the long lines, their store has been OK. "We have plenty of our specialty food, which for Italians is just food," he says with a smile. "But we have plenty of water and necessities and no panic buying. It was slow Tuesday and Wednesday, slower than usual, but it picked up today."

Pittsburgh, at the moment, is a flurry of contradictions. There are still people out and about -- not at the normal clip but not in complete withdrawal. Shelves are not empty in several CVS and dollar stores, but they're wiped out at Whole Foods and Costco. Schools were still open Friday afternoon, until Gov. Tom Wolf announced a 10-day closure, with some districts announcing longer closures.

By Saturday morning, Fitzgerald confirmed the first two cases of the virus in Allegheny County.

"That is what we do around here," Fitzgerald says. "Our civic leaders in medicine, business, labor and foundations all pull our expertise and abilities together, because we are all in this together, and you see that reflected in people everywhere here."

Fitzgerald is not wrong. Despite facing financial peril, Coen is also pulling the local businesses together in the Strip to accumulate, store and distribute food and necessities to elderly and sheltered people in the area.

He is the quintessential American Everyman. Ordinary only to the unobservant, his common traits are generosity, pride in community, volunteerism and knowing everyone by name.

He says what happened is no one's fault, and he admits the crisis is going to get worse before it gets better. "Whatever this looks like on the other side, we will prevail," he says. "That's not just here. That is in most places in America."

Wait until he finds out the democrats want to force him to give his employees up to a month of paid leave, from day 1 of being hired.

“That is who we are here. We lift each other up, and people kept telling me we are all in this together.”...

What, being screwed for possibly a Year and a Half by the deep state to steal an election?

Yes, we are all in this together.

And YES, there is talk of needing quarantine that long.

It takes as past the election and from protesting the fraud.

Maybe we’ll be voted on lines with armed guards around.

Maybe that whole voting in a private booth thing may go away.

He says what happened is no one’s fault, and he admits the crisis is going to get worse before it gets better. “Whatever this looks like on the other side, we will prevail,” he says. “That’s not just here. That is in most places in America.”
...
We all should be getting some takeout food and for those who eat healthy options there definitely are lots of those also. It is very sad. I certainly disagree with him that it’s nobody’s fault. It is definitely somebody or an entities fault or even a country’s fault Black by communist dictators. I will go so far to say that I believe even our CIA and other nefarious characters like Soros were certainly involved in concocting this. I am cautiously and foolishly optimistic and would rather be that then to be down in the dumps all day. We will come back from this and fortunately we have President Trump in place instead of a communist dictator. Any of the characters on the left fit the latter description. On an aside the more I think about the girl they took the picture of eating the back, the more I think she was a paid dumpster fire.

I am becoming more and more convinced that the "cure" is worse than this disease. We are trashing our economy and getting people to accept more totalitarian control of society. Once upon a time, people died of disease. I do not considerable that to be unspeakable. If we did virtually nothing about COVID-19 we would quickly build herd immunity and we would preserve our freedom. But it doesn't look like we have any interest in that.

5 posted on 03/17/2020 4:36:50 AM PDT by ClearCase_guy (If White Privilege is real, why did Elizabeth Warren lie about being an Indian?)
[ Post Reply | Private Reply | To 1 | View Replies]
To: Kaslin
By Saturday morning, Fitzgerald confirmed the first two cases of the virus in Allegheny County.


A large group of Russian soldiers in the border area in 1939 are moving down a road when they hear a voice call from behind a small hill: "One Finnish soldier is better than ten Russian".

The Russian commander quickly orders 10 of his best men over the hill where Upon a gun-battle breaks out and continues for a few minutes, then silence.

The voice once again calls out: "One Finn is better than one hundred Russian."

Furious, the Russian commander sends his next best 100 troops over the hill and instantly a huge gun fight commences. After 10 minutes of battle, again Silence.

The calm Finnish voice calls out again: "One Finn is better than one thousand Russians.

The enraged Russian commander musters 1000 fighters and sends them to the other side of the hill. Rifle fire, machine guns, grenades, rockets and cannon fire ring out as a terrible battle is fought... Then silence.

Eventually one badly wounded Russian fighter crawls back over the hill and with his dying words tells his commander, "Don't send any more men...it's a trap. There's two of them."

That's how you know they are at peak hype. Even the Washpost admitted (today) it will go away in the warm weather.

The Reality may be
“The Road.”

It wasn‘t going to be a promising year for the Pirates anyway.