LOS ANGELES, CA -- Los Angeles Mayor Eric Garcetti says he hopes to reach a preliminary agreement with the Trump administration on a joint plan to help combat the city's swelling homelessness crisis when he meets with Secretary of Housing and Urban Development Ben Carson Friday, it was reported.

Garcetti said Thursday a final deal was still days or weeks away but expressed optimism that the two sides were making progress toward an agreement to provide federal resources, including land, to augment local efforts to erect more shelter space for people living on the streets, the Los Angeles Times reported from Washington D.C.

"I hope we'll get very close," Garcetti said on the sidelines of the U.S. Conference of Mayors' annual meeting in Washington.

Citing the negotiations, Garcetti would not say how much money the Trump administration might contribute. But he said the federal aid would not match the hundreds of millions of dollars spent at the local level.

Garcetti also said he could not yet publicly say where temporary shelters would be located. But he added that federal officials had visited sites in L.A. County including property owned by the Department of Veterans Affairs.

"There's surplus property that they have all over, so I think they looked at everything," he said.

In his comments to the mayors' conference, Garcetti downplayed hopes of a massive federal aid package to helps cities and states fight homelessness.

"There's no cavalry coming from Washington," he said. "But we will not solve this locally without our state capitals and our nation's capital."

Garcetti faces intense pressure to find housing for the city's burgeoning homeless population. Despite his aspirations for higher office as a Democrat, he has been eager to court help from the Trump administration as the crisis has worsened.

President Trump, a Republican, threatened for months to take action without consulting the city. But he has struck a more cooperative tone in recent weeks as it became clear federal officials could do little without local cooperation, The Times reported. 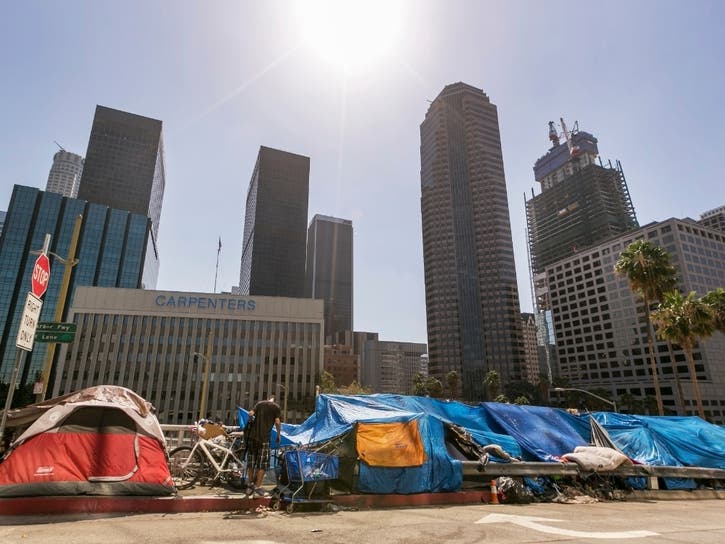 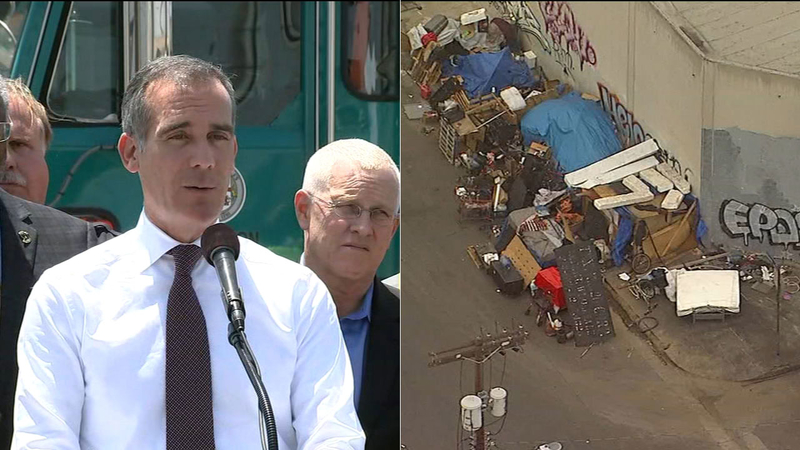 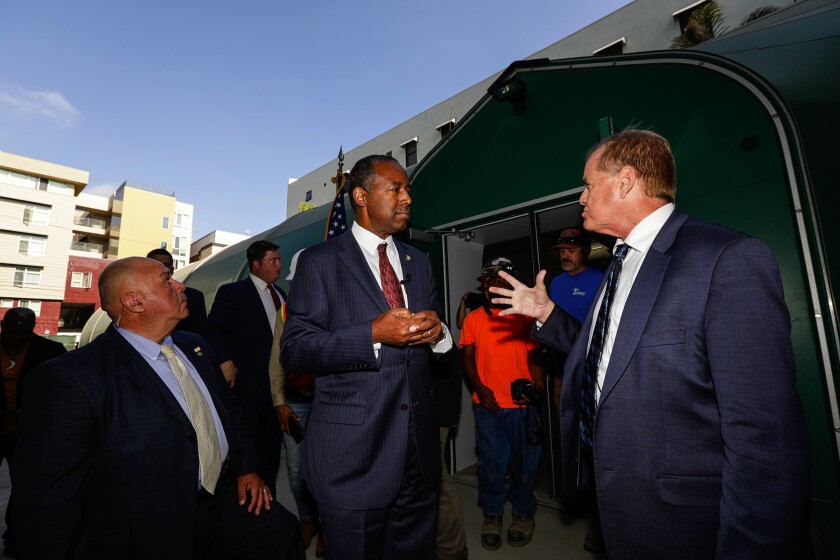 re-open mental hospitals and fill them up!!

big $ to be made off the homeless... gov’t contracts, housing development, third-party non-profits, lawyers...

the more homeless, the more money to be made.... until these incentives are changed, nothing will happen.

Well, well, well! Does Gov. Gavin know about this?

Something needs to be done. It’s way out of hand, and spreading like wildfire.

There are unsightly encampments under freeway overpasses all over the place.

These are moving to the suburbs, and middle income neighborhoods are under the gun. Crime seems to have increased considerably since these encampments were initiated.

If you own a million dollar home, it’s kind of disconcerting to find yourself in the middle of skid row.

Great opportunity for liberals to see what life looks like with an adult in charge.

You got THAT right, bub.
Why should the rest of America (us) pay for you to throw more money at a problem that YOU created with your liberal policies?

Wait until the plague or viruses start spreading exponentially among them. You’ll see scenes out of Dante on American soil.

It is a vagrancy, drug and alcohol addiction, mental illness, lack of law enforcement, bum, and loser problem.

Time after time I see “they are stupid”, ‘they don’t understand history”, “this will surprise them as it will end in failure”.

Absolutely NONE of that is true.

Homelessness has been a great success for them, as is gun control, school shootings, and any number of other societal ills they keep foisting on us.

16 posted on 01/24/2020 2:28:01 PM PST by Balding_Eagle ( The Great Wall of Trump ---- 100% sealing of the border. Coming soon.)
[ Post Reply | Private Reply | To 4 | View Replies]
To: CondoleezzaProtege
I am beyond sick of this so-called "homeless" problem. Has anyone of these blue city politicians ever explained by numbers/categories who are the homeless"?

Here's my explanation:
1. Too many are mentally ill. CA shut down many institutions that helped them years ago. They reproduce and proliferate.
2. Some are PTSD Veterans and lost their way.
3. Very few are single mother's who have fallen through the cracks as they like to say. Where are their welfare benefits?
4. California's illegal immigration that take jobs and low cost housing.
5. The vast majority are what we used to call bums or the romantic term "hobos". They just don't want to live in a structured society, plus they get all the food and water they need from different charity orgs.
6. Oops, forgot the druggies. It should be higher on this list.

Sure you're asking how I'm so certain of the above. I left a dis-functional family at 16. I lived in cars, garages, and even in a sleeping bag on the streets. I met some professional homeless and they would always tell me they prefer it that way.

At 16, I worked every menial job I could get to advance and got a studio apartment until I was self-sufficient and built from there. I remember one street job where I almost passed out from hunger. I didn't join the Navy until 25 years of age. I needed a bigger purpose. The bums don't want a purpose.

For the homeless, leftism is a total & complete disaster and nightmare.

Good grief...your spinning success for leftists is offensive to us patriots.

Why didn’t we hear this constant barrage of homeless news during the Obama years?

Sanctuary cities deserve NOTHING from the federal government.