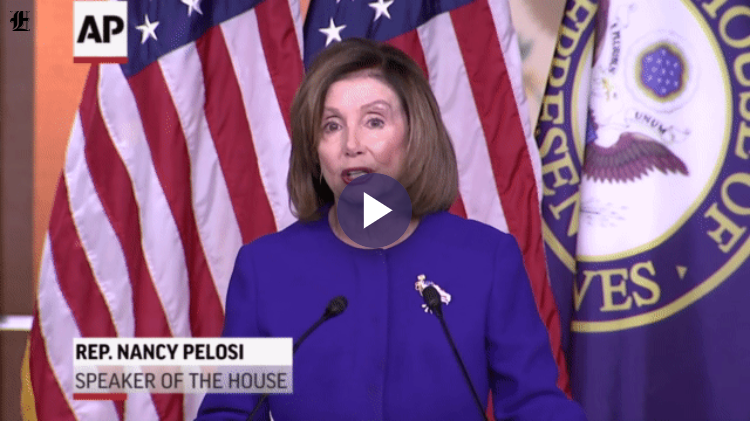 House Speaker Nancy Pelosi said Democrats are fighting to force impeachment witnesses who defied congressional subpoenas related to Ukraine to testify, but so far, no court cases against the four key figures exist.

Pelosi made the misleading claim in an ABC interview Sunday in response to comments about Republican critics saying House Democrats could’ve done more to exhaust their alternatives when Trump officials refused to show up to testify at the behest of the president, including bringing those cases to court and played a clip by Republican Sen. Susan Collins of Maine saying that “the House chose not to go to court to enforce its subpoenas, so there are gaps in what the House has sent us.”

“That isn’t even true,” Pelosi said. “We are in court on the witnesses. It could take a very long time.”

But no Ukraine controversy figures, including none of the four impeachment trial witnesses requested by Democratic Senate Minority Leader Chuck Schumer — White House chief of staff Mick Mulvaney, former Mulvaney senior adviser Robert Blair, Office of Management and Budget official Mike Duffey, and former national security adviser John Bolton — have been brought to court by Democrats to enforce the subpoenas they ignored, and Bolton was never subpoenaed at all. President Trump lawyer Rudy Giuliani also refused to comply with congressional subpoenas, and Democrats said they didn’t need his testimony to make their case and moved ahead with impeachment without it.

The only two high-profile appeals court cases being pursued by Democrats are related to grand jury material from special counsel Robert Mueller’s two-year Trump-Russia investigation and the desire to push former White House counsel Don McGahn to testify about events within Mueller’s report such as allegations of obstruction of justice...

She falsely claimed Obama was a natural born citizen, but curiously, only to Hawaii.

She’s a dem. Dem’s lie. It’s just what they do. They don’t know any other way.

The House has no power to effect what the Senate does. Pelosi can not issue a subpoena compelling anyone to appear in the Senate. This subpoena would have to be issued by the Senate.

It’s way past time for Nancy to go home and spend more time with her family.

8 posted on 01/12/2020 1:04:38 PM PST by Belteshazzar (We are not justified by our works but by faith - De Jacob et vita beata 2 +Ambrose of Milan)
[ Post Reply | Private Reply | To 7 | View Replies]
To: E. Pluribus Unum
Keep your eyes on the 2 billionaires, Tom Steyer and Michael Bloomberg...they will be spending their money buying the votes (anyway they can) for the Senate and Congress...trying to take over both Congress and Senate....free everything... (free phones) free education, free medical, food stamps and gov' housing...'buying the vote' taking America back to the Swamp and the Democrat way doing business.

Covering for the corrupt Biden's is only the tip of the Deep State iceberg. The way of doing business by the corrupt Progressives/Communist-Socialists will be back to quid pro quo. Stay with this POTUS Trump, and just maybe the United States Constitution along with the Declaration of Independence will continue to hold America together....under a Democrat potus and House that will never happen. Freedom is never FREE, we have to fight for it 24/7.

She needs to go home and pick her grapes.

She is almost as demented as Biden. I wonder who is really running these people?

Tom Steyer lacks charisma and has no gravitas

Bloomberg, the only real executive in the field, is the one to watch.

The best thing the country has going is that she’s elderly, is frail, has early-onset dementia, is an alcoholic. This anti-Free-America chronic liar and general freakazoid is not long with us. She and her extended family of worthless criminals should be in prison.

13 posted on 01/12/2020 1:34:36 PM PST by hal ogen (First Amendment or Reeducation Camp???)
[ Post Reply | Private Reply | To 1 | View Replies]
To: Captain Compassion
The House has no power to effect what the Senate does. Pelosi can not issue a subpoena compelling anyone to appear in the Senate. <<

I agree......the House/prosecutors have 11 witnesses that can be called by the “managers”....(its what they brought their case on).....The Senate/jurors should listen to them and then vote....

I know this isn't an actual Trial...but can you imagine individual “Jurors” telling the Judge who THEY want to subpoena to be a witness during the trial?? ......100 jurors each calling 2-3 who they would like to hear from.......Uncle Guido...Aunt Ester and even little Greta T...

Well, to her credit, she told us we’d have to pass the bill to see whats in it...