Watch: David Holmes Refuses to Say He Will Be More Careful with Communications
Breitbart ^ | 21 Nov 2019 | Joel B. Pollak 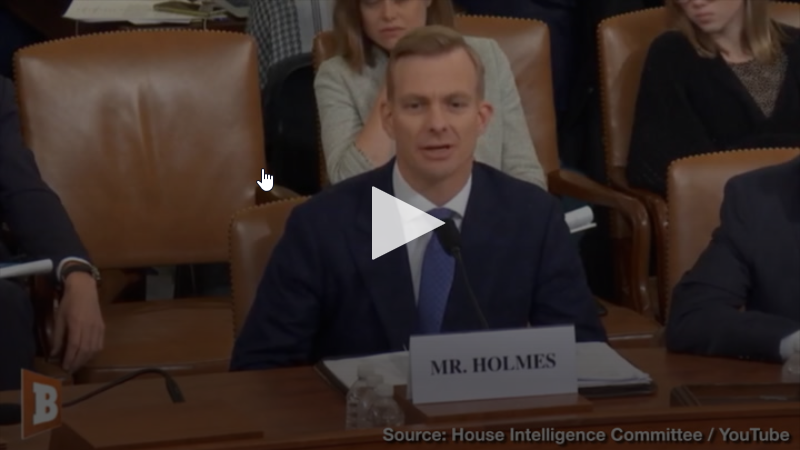 State Department staffer David Holmes refused to promise Congress on Thursday afternoon that he would be more responsible in future with sensitive communications. The political officer for the U.S. embassy in Kyiv, Ukraine, was testifying in the last public hearing of the House Intelligence Committee impeachment inquiry. He said that he had overheard a phone conversation at an outdoor restaurant between President Donald Trump and U.S. Ambassador to the E.U. Gordon Sondland in which Trump had mentioned “investigations.”

Though he did not take notes of that portion of the call, and had been drinking wine, Holmes said that his memory of the conversation was clear. He shared it with colleagues at the embassy, including Charge d’affaires William Taylor — though Taylor testified last week that he had only learned about the conversation recently.

In his closed-door deposition last week, Holmes had trouble remembering how many people he had told about the conversation. He admitted, for example, boasting to six friends on vacation about hearing President Trump on the phone call.

MR. JORDAN: You told friends you were sitting by an ambassador who was talking on his cell phone with the President of the United States, you told your buddies about that?

Of course he won’t. Once he cashes Soro’s check for so obviously and shamelessly lying, he will not have to worry about working again.

Retards, the US Gov’t is hiring Retards...

This little prick is disgusting. Time to drain the swamp.

Terminate this bum with extreme prejudice!!

And mediocrities like this doofus think they know better than the voters and the man we elected president. We are being smothered by a worthless, ever-growing, unaccountable and utterly corrupt bureaucracy.

Should immediately have his security clearance revoked.

If Trump is reelected I wish he would disband NSC, CIA, and The Feds

Of course, they will probably try to kill him if he tries to do it.

9 posted on 11/21/2019 5:50:46 PM PST by RummyChick
[ Post Reply | Private Reply | To 6 | View Replies]
To: E. Pluribus Unum
Though he did not take notes of that portion of the call, and had been drinking wine, Holmes said that his memory of the conversation was clear

In his closed-door deposition last week, Holmes had trouble remembering how many people he had told about the conversation

ya sure, no contradiction there ....

these jokers are making it up as they go along, anything to "Get Trump"

left out most important part in his statement
when told by sondland ukr agreed to investigation potus said: good and sweden.....

good what about sweden

What happened to “Kiev”?

According to my Grandpa, he went through the Bolshevik Revolution in Kiev. (Their slogan was “For The People” Same as Kamala’s.)

14 posted on 11/21/2019 6:00:18 PM PST by lizma2
[ Post Reply | Private Reply | To 1 | View Replies]
To: E. Pluribus Unum
...overheard a phone conversation at an outdoor restaurant between President Donald Trump and U.S. Ambassador to the E.U. Gordon Sondland in which Trump had mentioned “investigations.”

Was the speakerphone on? Who would use a speakerphone for a conversation with POTUS? Even if the loudspeaker on a mobile phone was on, you wouldn't be able to hear clearly who was on the call or what was being said more than a couple feet away. Most people hate mobile phone speakers because of their lousy voice quality. How did he know it was Trump and Sondland? Who was on the call at the outdoor restaurant?

This whole premise is just preposterous and beggars disbelief. This just doesn't pass the most rudimentary smell test.

This whole shampeachment is one stupid episode and testimony after another.

State is full of Schiffheads.

At a minimum fire EVERYBODY and make everybody reapply. Those who are hired must sign a Loyalty Oath to the Union and Constitution just like was done during Reconstruction. We are as divided as we were during the Civil War and Reconstruction, so why not use the same methods used then to repair the Union?

I’m guessing this guy is a spook and heard the conversation the old fashioned way - through a tap. A lot of these “diplomats “ are probably CIA. Take a look at Steve Pieczenik on YouTube. He has an interesting perspective.

“talks to his friends” about secure communications

C’mon—nobody could be _that_ stupid.

He should be sent to the Aleutians so he can spill his guts to seals.

Criticizing Soros is anti Semitic on the level of the Protocols of the Elders of Zion. That’s what Fiona said. Amazing,she thinks it’s wrong to even look into the web of Soros funded enterprises. Talk about sticking your head in the sand and not wanting to know the truth.