Likely will not be edited or removed any time soon 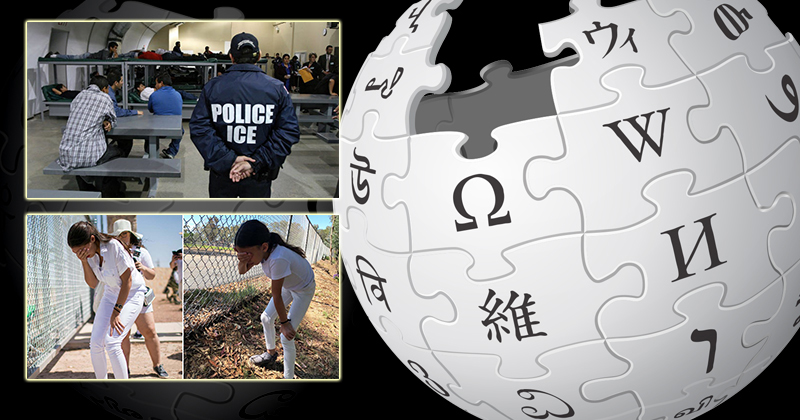 Wikipedia, the online Encyclopedia, which has been routinely accused of left wing bias, has a list of ICE facilities under a section titled “concentration and internment camps,” and is keeping it there despite critics requesting it be removed.

The list of ICE facilities reappeared on the concentration camps page after Democrats, including Alexandria Ocasio-Cortez, used the rhetoric to describe US holding centers on the border with Mexico.

Editors of the Wikipedia page cited the Democrats’ use of the term “concentration camp” to justify the inclusion of the ICE centers on the page.

A discussion regarding the inclusion of the centers has been closed, with the list of facilities remaining on the page.

Wikipedia policy states that another discussion with have to be opened before the matter can be reviewed again.

The way Wikipedia functions means that even unregistered users are able to add sections to pages, which can then be edited and added to by other users.

TOPICS: Crime/Corruption; Culture/Society; News/Current Events; Politics/Elections; US: New York
KEYWORDS: concentrationcamps; facilities; ice; infowars; liberalfascism; newyork; ocasiocortez; occasionalcortex; propaganda; trumpdhs; wikipedia
1 posted on 08/22/2019 7:17:42 AM PDT by Enlightened1
[ Post Reply | Private Reply | View Replies]
To: Enlightened1
Which is an insult to every survivor of the holocaust, the Soviet gulags, or real other real concentration camps. You can't compare them to detainment facilities for law breakers.
2 posted on 08/22/2019 7:23:17 AM PDT by Telepathic Intruder
[ Post Reply | Private Reply | To 1 | View Replies]
To: Enlightened1

Well of course they list them under a concentration camp label. The liberal view is that these facilities are no different than Auschwitz.

Trump is Hitler, ICE agents are like the Gestapo or Nazi Storm Troopers, the ICE facilities are concentration camps. The common theme here, is to compare America and the Trump administration to Nazi Germany.

That’s the twisted leftist mind for you.

An insult to every victim, I should say.

The Left has to control language, lest their true intentions be revealed.

Then why not the US prison system both state and federal. Those inmates are being held against their will.

So I guess every public school is a prison during the day...

Maybe the next big push for the libturds will be to abolish all prisons so we don’t separate children from families which is cruel...forgetting the children separated from murdered parents.

No wonder Wikipedia is not taken seriously by even third-rate grade school teachers - it is not serious, it is ideologically-driven (toward the Left, of course) whenever politics can be inserted into an article either overtly or in a manipulative manner.

SCREW Wikipedia for anything serious. If I need to know anything about the number of teeth an Asian Tiger has, I look there...otherwise, screw that bunch of Leftist assholes.

Wikipedia is listed under the False and Misleading Section

Thanks Enlightened1. Wikiagitprop is just living down to expectations -- yet another DNC party organ.