Things seem to be moving quickly now. It has been a remarkable few weeks in American history. Momentum is building toward uncovering the distasteful possibility that the targeting of a U.S. presidential campaign was actually a political operation, fostered at the highest levels of government, masquerading as an FBI counterintelligence investigation.

Attorney General William Barr has signaled that his interest in examining the origins of the investigation into the Trump campaign extends beyond whether the FBI operated “by the book,” as former FBI Director James Comey asserts. Barr also wants to understand the role that the larger intelligence community, or IC, may have played in all of this.

Barr has thrown punches that have left an interesting mix of characters with a standing eight count. Certain eyes around D.C. are a little glassy right now.

Barr’s words and actions are telling. First, he raised the concern that the Trump campaign was “spied” upon. His use of the word “spying” appears more calculated than casual. The wailing and gnashing of teeth that followed is also telling. “The FBI doesn’t spy” became the sputtering counter-refrain of those trying to mask their nervousness.

It’s a fair point that’s beside the point. The FBI is charged with acting under strict legal restrictions and court orders. Spying is not a term traditionally associated with those activities.

But it also misses the point Barr appears to be making. The IC does spy; that’s what they do. Barr may have been referring less to the FBI and more to the IC’s possible murky involvement.

This seems to be validated by Barr’s second haymaker in as many weeks: his appointment of a surrogate investigator, U.S. Attorney John Durham. Why would the attorney general add a third investigation to those under way by Department of Justice Inspector General MichaeHorowitz...

THe Krassenstein’s hate Trump so much I am surprised they allow anything postive at all on their site.

Must be the waters are rising...and they need a life preserver?

Not buying into it.

Barr specifically used the word “review” with regards to Durham.
Not a criminal investigation, not any grand juries, just a “review”.

Reminds me of Huber in Utah and his 30,000 sealed indictments.

Fool me once.... No grand juries, no indictments, no perp walks, no 4am FBI raids, no solitary confinements, nothing. Crickets.

The three amigos are going down. Now stay tuned for the next exciting episode of “ Who’s Tellin’ the Biggest Whopper”. Will one of these three give up Hillary or Lynch or (gasp) Obama or will they stick together in an en masse episode of Hiri KIri. Stay tuned, the plot thinckens.

Thanks for posting this Jim. Glad to see the investigators are concentrating on the bosses instead of the line workers.

Still waiting for the indictments and perp walks.

My guess is that the Rat rush to embrace impeachment lately has more to do with Barr’s stated intentions than any other single reason. Reps who need to be arrested and thrown out of office will be voting to impeach.

There’s been info out there that Durham convened a Grand Jury weeks ago - even before Barr took his position. True? IDK.

Actually, I believe the push to impeach will happen and it is being driven by RBG’s health. If they have ongoing impeachment hearings and she would die during them, I do believe they would argue that a POTUS under impeachment should not be allowed to seat a SC justice.

Agreed. Until I see actual results, this is just bluster.

But, a guy can hope.

Watching Brennan’s and Comey’s perp walk (and CNN’s teary-eyed coverage) would fill me with inconsolable joy.

Yet another "constitutional crisis."

“Seven Days in May”
The only difference was a the DNC and Clintons were in charge of “Site Y” and the Military wasn’t involved.

Looks like with AG Barr there’s a new sheriff in town that goes by the law and he’s tapped Durham as his deputy who he’s confident does so as well.

Leaders of the attempted coup are scurrying like rats abandoning a sinking ship and turning on each other to be the first one off.

This is going to be much fun to witness and it’s long overdue.

Good point, but she was very ill long before this latest impeachment push gained much steam . . . but Trump has pummeled the liberal bastion of the 9th Circuit here in recent days. It certainly is at least a big part of their motivation. 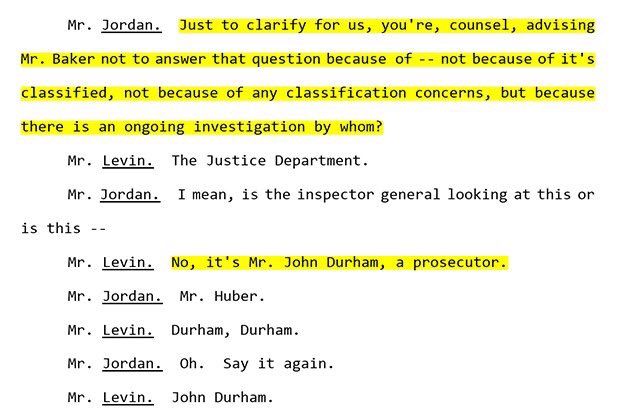 I hadn’t thought of THAT ANGLE. Could very well be!