Targeted training materials make it clear that the Democrats are seeking to “destroy Trump’s presidency,” offering a window into Democrat strategic thinking as the 2020 election heats up. Both Hillary Clinton and Michelle Obama are included as top presidential contenders in activist polling as Democrats gauge support for either a Clinton or Obama run.

National Democratic Training Committee (NDTC), a well-funded 527 PAC bankrolled by the AFSCME labor union and others, is targeting Democrat activists with a poll that was provided to Big League Politics by investigator Marie Hembree. “We’re SO EXCITED about the amazing Democratic candidates running to destroy Trump’s presidency in 2020,” says the introduction to the poll. Issue points include “Undoing the damage of Donald Trump’s administration” and “Ability to Beat Trump.”

So who are those candidates, exactly? They include Hillary Clinton and Joe P. Kennedy III. While Kamala Harris is first on the list, Clinton appears directly between Joe Biden and Bernie Sanders. This is no accident — the National Democratic Training Committee is also running a separate poll, the intro to which states that Clinton was “robbed” in 2016 and confirms, “we’re polling Top Democrats from your area to determine possible support for a Hillary Clinton 2020 Presidential Ticket.” That poll includes Michelle Obama on the list of possible Democrat contenders.

She polls higher than the other candidates, and the narrative is that she was "robbed" of the Presidency in 2016. The Dem machine is firmly behind her. No one wants to admit it right now.

When the seven dwarves (or how ever many Dem candidates there are) are finished playing their mindless games and getting nowhere, the evil queen will step in and "save" the Dem party.

i don’t doubt you. But which polls are you referring to?

I don’t honestly rule out Michelle Obama either. She thinks so highly of herself. Good luck with that, moose.

I’ve though Hillary was a sure bet to run for some time.

Maybe not, but she is so hungry to be the first female president.

Expect them to pull out all the stops next time around.

It won't matter how bad a candidate Hillary is. The compliant media, illegal immigrant voting machine, big money donors, and Trump-haters (many of them RINO Republicans), will combine forces to put Hillary in office, where she can do their bidding for them and bring back the deep state.

I said all along she is running and will literally kill anyone who stands in her way.

I just saw the best potential meme for HRC on Tucker Carlson.

OMG if we weren’t already going to be going to the voting polls in droves just run HELLARY, Republican voting will be at 100% across the country just to be RID of this BITCH ONCE AND FOR ALL!!!

So who are those candidates, exactly? They include Hillary Clinton and Joe P. Kennedy III. While Kamala Harris is first on the list, Clinton appears directly between Joe Biden and Bernie Sanders. This is no accident — the National Democratic Training Committee is also running a separate poll, the intro to which states that Clinton was “robbed” in 2016 and confirms, “we’re polling Top Democrats from your area to determine possible support for a Hillary Clinton 2020 Presidential Ticket.”

I am too! Let's see, we now have Sleepy Joe by a nose, Crooked Hillary on the rail (so she can grab it if needed), Chewbacca (the dark horse) and the 20 perverted dwarfs rounding out the field. This is a long race and the track is muddy 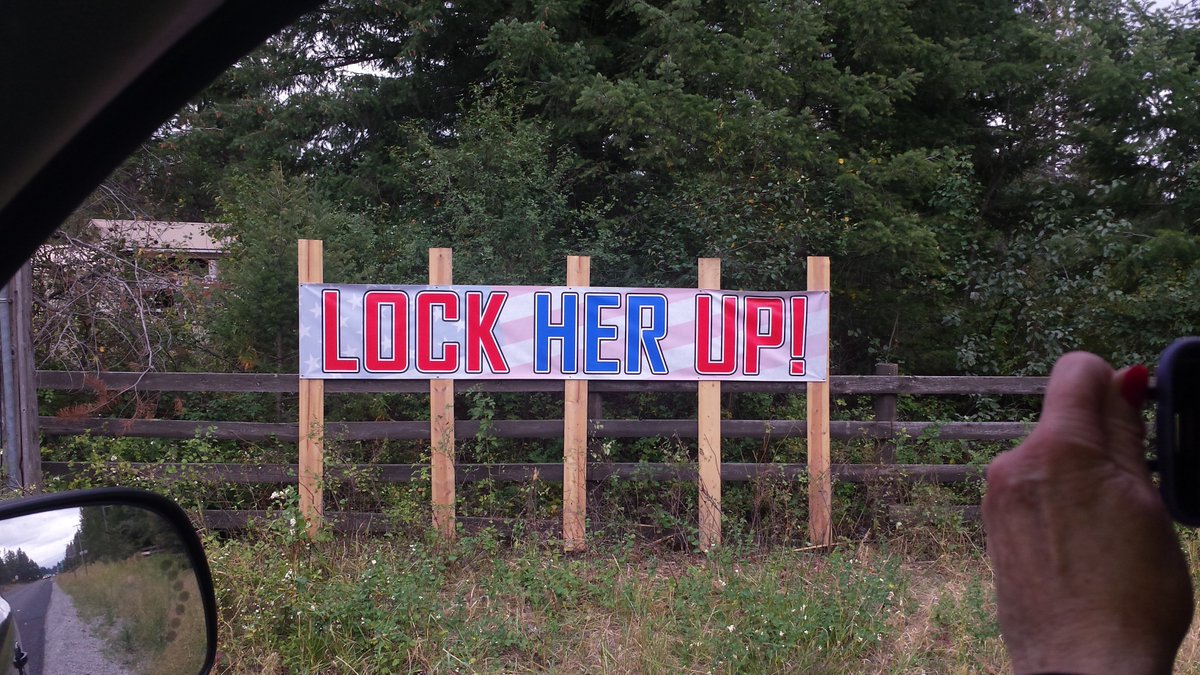 10 posted on 05/06/2019 9:08:18 PM PDT by Baynative ("A man is not old until regrets take the place of dreams." - John Barrymore)
[ Post Reply | Private Reply | To 1 | View Replies]
To: blondiegoodbadugly
The investigations of the Investigators and various special reports due very soon with bury Hillary and probably an Obama. No one liked her (or them) then...it's not likely to get better.

Then again...look at the clown car...pitiful. A major screw-up from DJT is necessary for any of them to have a chance, once Barr is done shredding them.

So will Hilldog use her upcoming prosecution as a fundraising ploy to beat Trump? Can she run a campaign from a prison cell?

Truly psychotic. Ho much rejection does one person need?
And god knows if she won (through fraud) she would subject America to such hateful revenge that she would literally provoke civil rebellion.

“Maybe not, but she is so hungry to be the first female president.”

It goes way, way, way beyond that. She is a dangerous, sociopathic, pathological narcissist who has an emptiness that can only be filled by becoming ‘historic’. I believe this is more important to her than life. This makes her very, very dangerous.

I don’t argue with that. Fact is, she almost has to run to protect herself from prosecution, at least in her own mind.

Hopefully Barr is going to get to the bottom of this, and she’ll be indicted in short order.

Will all the BernieBots and hardcore millennial lefties stick around if Hillary gets the nod again? I would think so since their hatred for the president is strong, but I think there will be a lot more rancor than in 2016. Also, the Obama forces aren’t just gonna sit idly by while the Clintons try to recapture the crown!

I’ve said all along she’s running

Hopefully Hitlery will be indicted before this time next year.

We can only imagine how brutal she’d treat her enemies if she would ever be POTUS.