Whitmer’s budget proposal will include a 45-cent gas tax increase, which would be phased in over three separate intervals, the governor’s spokeswoman Tiffany Brown told reporters Monday. The rate would begin increasing in October, hit its second phase in April 2020, and ease into its final phase by the end of that year.

The increase is expected to generate roughly $2 billion a year in additional revenue for roads, according to media reports. Whitmer, a Democrat who ran on fixing Michigan’s roads, will present her idea to lawmakers Tuesday during a joint meeting of the House and Senate appropriations committees.

Whitmer’s plan would make Michigan’s one of the highest fuel tax rates in the country, behind the likes of California and Pennsylvania. Michigan motorists currently pay 26.3 cents per gallon. Total at-pump costs in the state are already the sixth-highest in the nation, in part because Michigan applies its 6 percent sales tax to fuel purchases.

Michigan Republicans have mixed feelings about such an increase.

Michigan Republican Party Chair Laura Cox panned the idea, saying in a statement that residents “deserve real solutions on this critical issue, not a tax and spend solution which places the burden on the state’s overtaxed families.”

Others are more supportive.

> The increase is expected to generate roughly $2 billion a year in additional revenue for roads... <

And how much of that will actually go to roads? Inquiring minds want to know.

She’s going to make the colossal failure Governess Granholm look like a genius.

Here in Minnesota they raid the gas tax fund and put it in the general fund.

Make Pennsylvania’s the SECOND highest gas tax in the nation. 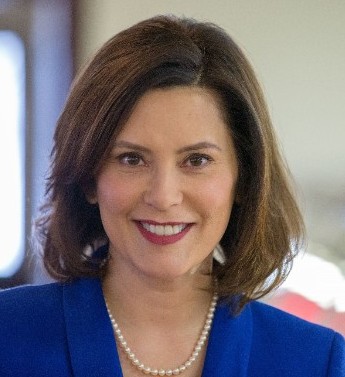 Can she account for the prior taxes to pay for road maintenance? If not, FOAD.

Yeah, and PA can thank that feckless, spineless REPUBLICAN governor Corbett for the save Philly gas tax.

Whatever’s left after the pols in Detroit get their cut and a few more hundred miles of bike paths get built.

Given your photo, I’m guessing that her “brains” are mostly below her shoulders.

How many more state troopers will be hired to watch cars with Michigan plates fill up across the state line in Indiana and then bust them as they cross I wonder....

And MN independents learn that elections have consequences.

They keep the weight limits on semis high to help the truckers but they do the damage to the roads. She wants more money for education too. Two old songs we hear over and over and over.

Sheesh. What is it with Michigan and left-wing female Governors?

Sometimes you have to make mistakes to learn things.
Sometimes not even mistakes can get the job done.

So has Minnesota's Democratic Governor. It's what Democrats do.