When you ask a question at a lecture, is it secretly just your opinion ending with the phrase “do you agree?” If so, your name is something like Jake, or Chad, or Alex, and you were taught that your voice is the most important in every room. Somewhere along your academic journey, you decided your search for intellectual validation was more important than the actual exchange of information. Now how do you expect to actually learn anything?

American society tells men, but especially white men, that their opinions have merit and that their voice is valuable, but after four years of listening to white boys in college, I am not so convinced. In my time at Dickinson I have listened to probably hundreds of white boys talk. It feels incessant. From classes and lectures, to the news and politics, there is an endless line of white boys waiting to share their opinions on the state of feminism in America, whether the LGBTQ+ population finally has enough rights, the merits of capitalism, etc. The list of what white boys think they are qualified to talk about is endless. Something very few of them seem to understand is that their (ill-informed, uncritical) opinions do not constitute truth. In fact, most often their opinions aren’t even original. White boys spout the narrative of dominant ideologies and pretend they’re hot takes instead of the same misleading garbage shoved down our throats by American institutions from birth.

I am so g****mned tired of listening to white boys. I cannot describe to you how frustrating it is to be forced to listen to a white boy explain his take on the Black experience in the Obama-era. Hey Brian, I’m an actual Black woman alive right now with a brain. In what world would your understanding of my life carry more weight than my understanding? Unfortunately, it is this world, where white men debate the pain of other people for fun and then take away their rights. The second thing most white boys seem not to understand is that they do not exist separate from the rest of the world. You do not speak alone, you speak with the weight of every other white man who has spoken over a woman, erased the contributions of queer people from history, or denigrated “broken English” as unintelligent. You speak with the weight of policies and laws meant to forever define intelligence by how it measures up to the bros of America.

So, should white boys still be allowed to share their “opinions”? Should we be forced to listen? In honor of Black History Month, I’m gonna go with a hell no. Go find someone whose perspective has been buried or ignored and listen to them, raise up their voice. To all the Chrises, Ryans, Olivers, and Seans out there, I encourage you to critically examine where your viewpoints come from, read a text that challenges you without looking for reasons to dismiss it, and maybe try listening from now on.

I beg to differ.

It’s all about race. Perhaps if the “white boy” didn’t need to hear about “race” and “inequality” every waking minute of every day, he wouldn’t feel the need to comment about it.

This writer has been mentally enslaved by her ideology.

See the contrast between white “boys” and a back “woman.”

Seems the author is judging by the color of ones skin, not the content of ones character.

Wonder why they’d publish such a racist screed.

Not really, I don’t really wonder. 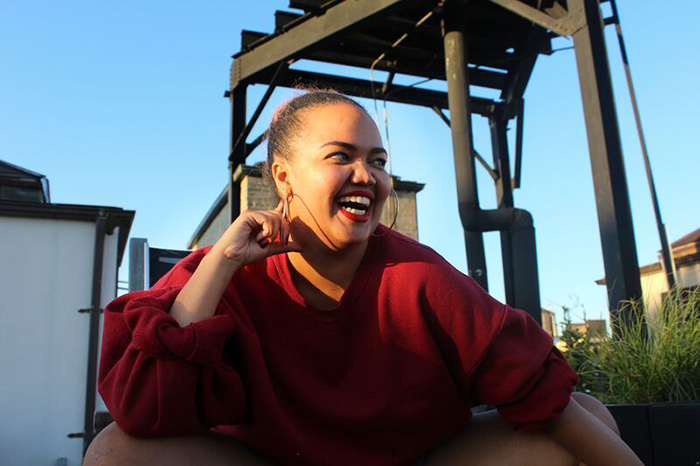 Leda Fisher '19, the authoress of this unintentionally hilarious tripe.

Really? Where's his evidence for that? I attended Catholic schools back in the 50's and 60's, and there was never any suggestion that boys' views were regarded more highly than those of girls. No teacher ever said, "The opinions of white males are more valid than those of anyone else."

In fact, for the first two years of high school, the classes were sex-segregated to avoid some of the foolishness that goes on at that age, and the girls would therefore be the only voices heard in those classes. Many of the girls went on to professional careers, and this was nearly fifty years ago.

Pssst...Hey Leda!
When you finally kill to eat, work to support your life, earn your keep, and actually add value, innovation, and merit to your place in civilization (not your crack house hood), then maybe I’ll listen - MAYBE....

Until then, this White Hispanic Man will keep on yapping and destroying your evil world view.

Tell white boys that they are not allowed to speak because of their race and gender - yeah, that sounds like a formula for racial harmony.

You filthy racist!
My opinion is worth more than yours. My opinion constitutes truth.
I am so sick and tired of black women explaining how White boys are evil, stupid and racist.
I do not speak the weight of every other White man. I speak for myself. Your mental problem is that you put all Whites into one category, and then you condemn them all. You are a racist pig, and in honor of White Guilt month, I hereby declare you a sick individual.
You should not be allowed to share your “opinion.”

What a load of hooey. But it’s coming down to this. They want white people cowered in a corner, eyes lowered, and able to speak if only asked a question. And you better give the right answer.

Come to think of it, there was a video of it in a college already. I’ll try to find it.

This woman, and millions like her, would be very scary in power. I have no doubt that many people with her mindset would endorse extreme violence, executions, and mass exterminations.

We’re pretty g****mned tired of listening to you too, hoe.

shut this school down im sure its the white people that kept it open ....

So she's a racist, and an anti constitutionalist.

It's already happening. Those two Muslim women who were just elected to Congress are cut from the same cloth as this woman, and this sort of mentality has been dominant in academia and the corporate world and government for some time now. The idea that young white boys should not even be allowed to speak in school during Black History Month just takes it one step further.