Members of the Black Panther Party marched through the city of Atlanta, strapped with assault rifles and brandishing Stacey Abrams campaign signs.

In a video posted on the group’s Facebook page on Saturday, members of the Black Panther Party are seen marching through the West End neighborhood of Atlanta in support of Stacey Abrams gubernatorial campaign. As they marched, the Black Panthers carried assault rifles and continually shouted slogans such as “black power” and “power to the people.”

“There probably aren’t more than a couple hundred Black Panthers in the whole state. Their votes won’t make much difference, but their scare tactics might”.

Hopefully their scare tactics scare people away from Abrams.

We’ll not hear a peep about this from the Gun Grabbers. 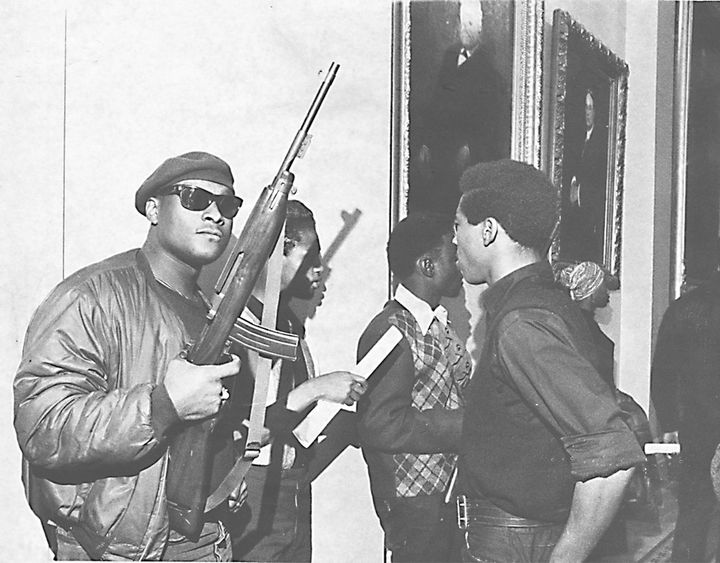 These pictures are amazing. They should really help the candidate. The Republican one.

I think this story proves my point.

In certain parts of Atlanta those guys are considerably underarmed.

They look like they’re ready to take on a “draw mowhatsis” cartoon contest.

But But I thought Stacey Abrams hates guns..nah its all good as long as the Jew hating Black Panthers carry them, just like in 2008

Time for a crop-duster to fly over and spread a little chicken fertilizer on them .

So,it’s okay to carry an AR down the streets of Atlanta?

I thought Stacey Abrams wants to Ban all these weapons ,Oh wait only for Whites

They got their five-star guy holding the sign and their four-star guy brandishing the big gun. That’s an interesting ratio of chiefs to indians, too!

The corporal is showing his rank as two purple stripes on his white socks.

And they want us to turn in their guns. This Cracker sure ain’t.

Four tough guys riding around in a minivan.

Hopefully, they took the sippy cups out of it. Those can be deadly.

“Laz was wrong about the scope, it is properly mounted.
It’s just a different design than we are used to seeing.”

I think Laz is correct. I have never seen a scope where the rear optic is larger than the front optic. Please elucidate on this.

The reason the front optic is always larger is to gather as much light as possible. The rear optic is what magnifies the image. Without a lot of light gathered the image in the scope would be much dimmer.

I have been using scoped rifles for over 50 years.

The important thing is to publish this picture as much as possible in GA.

These morons will drive every un-woke suburban whitey to the nearest polling booth as fast as they can drive the Toyota to vote for Kemp.

Hilarious. The genius on the left looks like he’d shoot himself in the foot if he tried to operate the thing.

When I first saw the photo I thought it was Venezuela and not Georgia. But then I noticed the candidate sign and realized that it was Abrams and not Maduro.