The Left ruins everything.

That’s because the Left stands ready to eradicate any norm at any time if there is political advantage in it. The latest to be cast aside are the precepts that we never tolerate unbridled, abusive investigations, nor do we abide full-blown criminal investigations without solid evidence that a crime has been committed — and even then, we demand adherence to time-honored limits.

In the probes of Donald Trump and, now, Brett Kavanaugh, these norms have been wiped away by the simple expedient of rebranding criminal investigations. Now the sleuths are unleashed under the guise of “counterintelligence” and “background checks” — whatever pretext is needed to get their foot in the door. Once they’re in, the earth is to be scorched, as if the crime of the century had occurred.

Of course, we want criminal investigators to be aggressive. But that has always meant aggressive within strict parameters. These are dictated by the degree of certainty that a crime has been committed, and by due-process rules with which the FBI must comply or be held to account when the case gets to court.

By contrast, when the Left criminalizes political opposition, no crime is required; just gossamer-thin, incoherent, uncorroborated, often unverifiable allegations: perhaps multiple-hearsay innuendo against a Republican presidential candidate, passed on by anonymous foreigners to a hyper-partisan, left-wing foreign spy working for the opposition Democratic political campaign. Or maybe a 36-year-old claim of sexual assault by an alleged victim who cannot remember basic details or keep straight the details she claims to remember; whose named witnesses do not back her account; who declines to address whether her accusation has been influenced by the controversial psychotherapeutic process of “recovered memory”

Reason why we have an FBI and a DOJ who are criminally responsible and working with inside and outside forces to quietly overthrow our system of government. Moving forward after the mid terms I can only hope that Trump creates a commission of great legal minds to prosecute and jail those who are involved. If we don’t the Clinton Obama axis who created all of this will go unpunished and will be back

2 posted on 10/06/2018 3:18:39 AM PDT by ronnie raygun
[ Post Reply | Private Reply | To 1 | View Replies]
To: reaganaut1
In the probes of Donald Trump and, now, Brett Kavanaugh, these norms have been wiped away by the simple expedient of rebranding criminal investigations. Now the sleuths are unleashed under the guise of “counterintelligence” and “background checks” — whatever pretext is needed to get their foot in the door..

Criminals, sociopaths and democrats don't respect 'norms' unless they work in their favor. It's a major force in coarsening our our culture. When you're dealing with louts - you have to make LAWS governing behavior - not 'norms'. Norms are for civilized people.

This should come as no surprise to anyone who’s been watching for a while. The political left weaponizes everything it touches. Everything.

There has got to be a stop to all this. The insane Left has everyone terrified, because we don’t even have protection or recourse against them; instead, our law enforcement and justice agencies seem to be completely under their thumb and doing their bidding.

And pressure on the personal level is out of control. I read this morning that Facebook was subject to attacks yesterday because a FB VP was “spotted” sitting in the ranks of Kavanaugh supporters at the hearings. The two men have been friends for 20 years, have gone to each other’s family events, etc.

Who the heck even knows what a FB 2nd VP looks like? Do these leftist loons sit around running crowd photos through a facial recognition system so they can identify “offenders” and launch an attack on their private lives? Very scary stuff.

5 posted on 10/06/2018 3:36:19 AM PDT by livius
[ Post Reply | Private Reply | To 1 | View Replies]
To: reaganaut1
What a great read and so true. Andrew boxes together the whole of what has been agitating and angering me down deep for the last couple of years and so acutely these last couple of months.

He precisely identifies the rub with the left’s tactics regarding their penchant to investigate and agitate their opposition outside the “norms” as a means to defeat them. Additionally, they justify this by labeling and attacking the “norms” as some kind of privilege that is afforded to only their opposition and thus the “norms” must be stripped away, no matter what basis in culture, law, or Constitution the “norms” are rotted in.

I watch Andrew McCarthy as a contributor on Fox News and am always waiting to hear from him the brilliant clarity like this piece delivers, but he never is as good in person as he is in his writing.

Andrew McCarthy - a voice of reason.

Great article. He is the Best reason to still visit national reviews website

They are communist tactics, just like the violent, paid protesters. How quickly people forget.

The left has used the courts for their advantage. They use the media to promote their distorted messages. Many in the media are useful idiots.

I saw that yesterday about the FB - VP attending the Kavanaugh hearings. What got me angry is when he apologized for being there. Here is a 20 yr friend, feeling so pressured and threatened by the lunatics, he felt the need to apologize for supporting his friend? Its crazy....insane, maddening and pathetic. My blood was boiling when I heard that. The lunatic left is completely out of control. Somehow their antics need to be stopped. I hope and pray President Trump is the person who can do it. And I pray there are enough sane people in this country, who are just as angry and vote against the democrats.

Is anyone else amused by seeing mushy moderates and even fire-breathing NeverTrumpers suddenly become the leading edge of blowback against left-wing aggression?

There are no more hearings.
Instead we have Stalinist show trials, Maoist struggle sessions.

Hoist them on their own petard.

The best defense is a good offense.

It is not only a good idea to punish the perpetrators, it is our civic duty. (see what I did there, Dr. Fraud?)

We need a strong Attorney General who will take a hard look at the connections between the various leftist organizations, and their common funding sources. If these “activists” are paid or otherwise assisted in crossing state lines for the purpose of preventing free speech by conservatives through acts of terror, or when they use false testimony, intimidation or doxxing to obstruct a Senate Committee exercising its obligation to advice and consent on the selection of a Supreme Court Justice, it seems a case can be made under the federal racketeering laws that these groups are a racketeering enterprise which has committed at least some of the predicate offenses identified under that law. Only when they are held accountable for their actions will things change. Unfortunately, I don’t see this happening any time soon.

Leftist Dems did this “lawfare” against TX Sen. Kay Bailey Hutchison, TX Congressman Tom DeLay, WI Gov. Scott Walker, and now to Trump and Kavanaugh. They have weaponized the judicial system against their political opposition. This is like what tyrannical banana republics and communist leaders do. Republicans need to start pointing this out constantly to the voting public. Dems must be held accountable for their despicable unconstitutional actions. 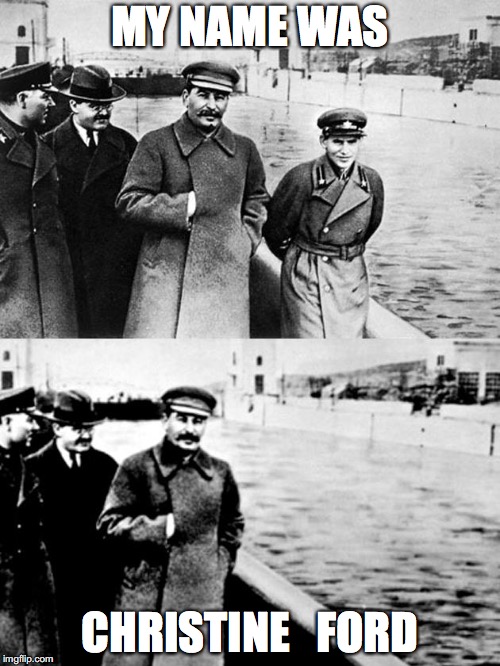