According to a Toronto Star article:

Justin Trudeau has been working assiduously to invoke the ghost of Stephen Harper, but this week the ghost himself appeared, no Liberal conjuring needed….There was the former prime minister, in a full-page ad in The New York Times, offering a full-throated endorsement of Donald Trump.

The Star’s article referred to Harper’s support for President Trump’s scrapping the Iranian deal, a deal that enabled Iran to expand its regional and global support of terrorism. Iran’s Supreme leader, the Ayatollah Khamenei, has vowed to destroy America and has called any promotion of negotiations treason. Khamenei has also promoted a nine-point plan to annihilate the “barbaric” state of Israel.

Yet Trudeau “delivered a thinly veiled rebuke to the Trump administration and Israel over their opposition to the Iran nuclear deal.” It is difficult to imagine that any mentally competent individual could possibly deem the rogue state of Iran to be trustworthy. This leaves one to reason that there are other variables at work. For instance:

Justin Trudeau has an unsavory record of supporting Islamic supremacists and putting Canadians at risk of jihad attacks. After Trump’s victory, Trudeau was so unnerved that he set up a “war room within his office” to monitor the new U.S. President.

Trudeau has shown himself to be an indiscreet man. He was investigated by Canada’s Ethics Commissioner for breaching four sections of Canada’s Conflict of Interest Act. He defrauded Canadians of $200,000 for a family vacation on the Aga Khan’s private Bahamian island. He also held a secret meeting with former Taliban captive Joshua Boyle (who is facing 15 charges), robbed taxpayers of $10,500,000 in a payout to infamous jihadist Omar Khadr, and quietly paid three more Muslims who were said to have been tortured while in detention in Syria and Egypt. According to a CBC report:

Trudeau is now desperately trying to extricate himself from his endless messes by smearing his biggest rival in the 2019 elections — the Conservative Party of Canada, led by Andrew Scheer:

The Conservatives, Trudeau charged, have learned nothing from their 2015 defeat and are continuing with the same negative tactics and divisive policies that characterized their government under Stephen Harper. He noted that Tory leader Andrew Scheer has dubbed himself “Stephen Harper with a smile” — indicating it was Harper’s temperament that caused the Tory defeat.

It begins. Down in flames for Castro’s illegitimate son.

Pretty boys. Ok women. Time to take your pants off.

The Liberals worst nightmare is the rise of a populist political movement in Canada.

Therefore the CBC decries PDJT, maligns him, and defames his work. Its a laugh.

I certainly hope that Canada gives birth to a genuinely populist party, so Canada can have a genuinely national economy. Canada is kept poor by the present crop of idiots in our Government.

Yes, The Go Native PM we have will defame and attack anyone who supports President Trump. His future and the future of the elites who divide and conquer Canada depend on it.

“Trudeau is now desperately trying to extricate himself from his endless messes...”

Sounds like a white Canadian version of Obama. Canada has dumshit voters too.

So cheer all you want, he’s no big friend of those who actually want to drain the swamp. But given any chance to carry water for Bibi Netanyahu and sure, he’s your man north of the border for that.

11 posted on 05/17/2018 9:25:33 AM PDT by Peter ODonnell (Look for England to do well at the World Cup until it starts)
[ Post Reply | Private Reply | To 10 | View Replies]
To: SeekAndFind
I read that Prime Minister Trudeau addressed a graduation ceremony of NYU graduates at Yankee Stadium 16th May last. He once again boosted "diversity" -he used the word antipathy and said it opposed:

"aggressive nationalism, the identity politics that have grown so common of late."

I will not criticise this gentleman, just turn away and hope he will be assessed on his record. Not on a matinee idol type popularity.

The major problem for Justin is that he and his people thought that they could turn back the clock to when people trusted both his father and Toronto and Montreal based news outlets (CBC, CTV, Globe and Mail, Toronto Star, Montreal Gazette, etc). Unfortunately, people even here don’t trust these places like they did a generation or two ago and along with that, Justin’s been proven to be a lightweight and a disappointment in his own right in many instances.

His disapproval rating is now at about the same level Harper’s was after Harper was PM for about 7-8 years and the stinky Senate scandal came out.

Why are Canadians so surprised at Justin’s lackof political chops?

This was as predictable as the sunrise

14 posted on 05/17/2018 9:37:29 AM PDT by canuck_conservative
[ Post Reply | Private Reply | To 13 | View Replies]
To: SeekAndFind
Trudeau is now desperately trying to extricate himself from his endless messes by smearing his biggest rival in the 2019 elections — the Conservative Party of Canada, led by Andrew Scheer:

The country needs to save itself and throw this punk out of office.

Trudeau and Obama are they Related ,LOL 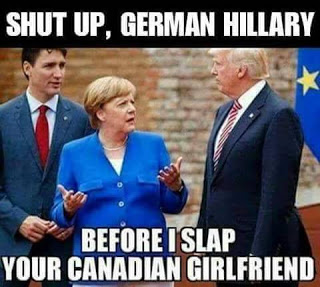 ok the sf Republican Party should give the homeless a oneway PLANE ticket to Seattle where a bus will be waiting for them at the airport to take them downtown. Give them a hundred bucks + a shower beforehand.

Liberal 101 - it is always someone else’s fault.